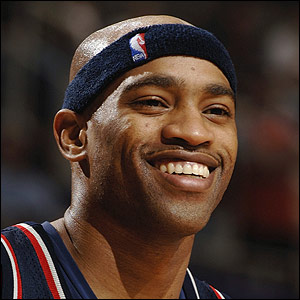 Bucks: The Bucks are now 6-0 at home. I caught the end of their win over the Mavs on Saturday night. Eazy-Yi put a nasty spin move on Dirk in crunchtime. Andrew Bogut played tough and came up with some clutch buckets. He looks much less girly-manish with his shaved head. The Bucks have now beaten the Cavs, Lakers and Mavs in succession, and with the Sixers, Hawks and Knicks coming up, this could conceivably be one of the best months in recent Milwaukee Bucks history. It won’t last but, like the tales of Thanksgiving that don’t include disease and genocide, it’s a nice November story.

Nets: This road trip illustrated why the Nets need Vince Carter. It’s funny. We (the media, generally speaking) pick on Vince for lapses in judgment and important sequences that lack aggression, but we rarely talk about how important he is to the Nets. Simply put, they’re a sunken ship without him. So here’s to you Vince Carter, offense rejuvenator and—gasp—difference maker, this Bud’s for you.

A few other points about the Nets:

–Sean Williams is a beast. If you haven’t seen him play yet, try and catch him, and not just for fantasy-junkie purposes. The best part is that, as Marv Albert and Mark Jackson were discussing in last night’s broadcast against the Lakers, he’s really only about 6″8. The small lineup that Lawrence Frank has been going with–usually a combo of Kidd, VC, RJ, Boki, Antoine Wright and Williams–has been very fun to watch. Less Malik Allen, please.

–Boki is averaging 16 a game over his last 4 games, hitting some big shots in the process. The Snackbar openeth.

Bulls: I can’t believe I allowed myself to watch the second half of their loss to the Raptors. They’re just terrible to watch. Just for kicks, here’s a choice selection from an Appleson chat I had with Russ about the Bulls:

Russ: I’m happy I’m out of town, because otherwise I would have gone yesterday (Bulls-Knicks at MSG). And then I would have DEFINITELY drank myself to death last night.

Jake: It won’t last forever, although it does seem like they don’t run any semblance of an offense. Maybe that’s just the lack of creativity. I can’t tell.

Russ: Pass, run around, shoot open jumper. Except they’re not getting open.

Russ: And everyone’s too goddamn small. And they don’t have ANYONE inside to open up the perimeter.

Russ: SHUT UP. I’m still dealing with the fact that in 2002 they could have drafted Amare Stoudemire AND Carlos Boozer instead of Jason Williams and Roger Mason.

Jake: You haven’t had enough time for those wounds to heal?

Russ: I’m just rediscovering that they ARE wounds, now that the small ball experiment is going up in flames.

Russ: It also sucks that they had the third pick when the first two selections were Dwight Howard and Emeka Okafor. Either of those guys would have been nice.

Raptors: It’s fun to watch Jamario Moon develop. He’s knocking down open shots and working his tail off. Kudos to Chris Bosh for battling down low against the Chicago’s bigs and picking up 13 boards the night after pouring in 41 in a losing effort to the Cavs. And I can’t sign off without mentioning Jose Calderon’s 27:1 (!) assist-to-turnover ratio over the past two games. Call him “Ho-ratio” because he’s pimping mistake free basketball.