Leandro Barbosa: The Only Honest Man in Phoenix 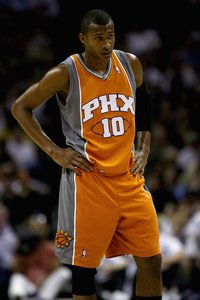 Everything is juuuussst fine; seriously, nothing to worry about here.

This seems to be he company line in Phoenix. From the controversial Shaq trade, to the fiasco that was Mike D’Antoni’s departure. But there’s one guy who’s not toeing the company line.

That man is Leandro Barbosa, and the truth (may) set him free (literally).

A Brazilian sports newspaper, Lance, asked Suns guard Leandro Barbosa about talk that he might wind up following D’Antoni to New York.

“It’s not a rumor,” Barbosa said while in his hometown, Sao Paolo. “I will play where I have to play. It’s business.”

“With the arrival of Shaq, we lost our speed – our main characteristic,” he said. “We didn’t have time to mesh. This ended up hurting us. Shaq will be very useful, but it’ll be necessary to change the way the team plays.”

Is it just me or are foreign players far more candid when speaking to reporters outside of North America? They do realize that the Internet and translators exist, right?