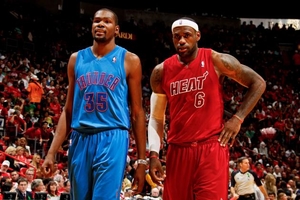 The two-man NBA regular season Most Valuable Player race is nearing its conclusion, with media folk having until April 17 to submit their votes.

Most of the basketball world would give the edge to Kevin Durant, something even LeBron James agrees with.

James, collector of 4 Maurice Podoloff trophies in the last five years, concedes that KD has been more consistently dominant, and says he would be happy to see his friend get the first MVP award of his career.

“I would say he’s the most consistent basketball player as far as the MVP this year,” James said before Miami’s game at Memphis. “He’s put up some great numbers.”

“I think KD has had one heck of a season and if he was rewarded the MVP, it’d be great,” James said. “It’d be awesome for him and his family. It’d be a great thing for him. He’s played MVP-type basketball. I don’t really get caught up in what people say. At the end of the day, they have their own votes and they go from there.”

There’s little doubt that Kevin Durant has been the NBA’s best player this year – ain’t that right, Serge Ibaka? – and deserves to hoist the MVP at season’s end.