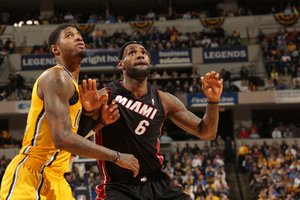 In what everyone can only hope was a preview of the Eastern Conference Finals, the Indiana Pacers and Miami Heat battled it out Wednesday night.

The third meeting this season between these two fierce rivals was a typically nasty and chippy affair; LeBron James’ elbow landed on Roy Hibbert’s grill, jawing between Dwyane Wade and Lance Stephenson led to an ejection of the latter, and following the Pacers’ thrilling 84-83 victory, Chris Bosh (who rushed and airballed a potential game-winning jumper) and LeBron complained about the officiating.

(Bosh was especially galled by two hard fouls on James by Ian Mahinmi and Luis Scola, both of which were reviewed but warranted no further action.)

“I see me and Blake Griffin take some hard hits,” James groused afterward. “They call it how they want to call it.”

“Our guys are getting punched in the face and clotheslined out there and we’re getting two shots,” Bosh said. “Then we get an offensive foul called – and it’s a flagrant. I guess we really need to decipher what ‘flagrant’ means. Because I don’t feel they were going for the ball. Especially in those two situations.

“If you can come down and clothesline somebody, I mean, it’s open season. People are going to get hurt. I don’t know, we’re going to have to revisit what ‘flagrant foul’ means to see if it’s even. But they had one and we had none, even though LeBron got punched in the face and clotheslined.”

LeBron brushed off his driving elbow to Hibbert’s face – which was called a flagrant-1 foul – saying it was purely accidental.

Miami and Indiana are scheduled for one final regular season battle (April 11), with the NBA Playoffs now less than a month away.