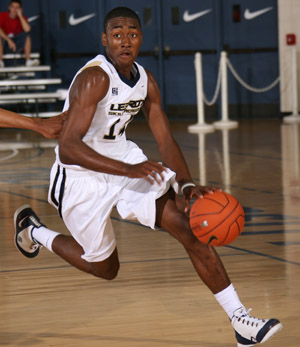 Hi! I’m back in Akron. The shake machine at Swenson’s was broken on Monday, which put something of a damper on my return to Northeast Ohio, but the draw of 80 of the nation’s best high school players, about two dozen terrific college ballers, and a couple of MVP candidates in the same gym mostly made up for it.

Plus, they fixed the shake machine on Tuesday. So I’m good.

As I write this, a large banana milkshake still digesting in my swollen belly, the second annual Nike LeBron James Skills Academy is wrapping up at the University of Akron’s Rhodes Arena. The consensus on the high school kids seems to be that no one is really blowing up this year—there are a lot of really good players, no doubt, but not the transcendent players we’ve seen in most of the recent classes. That said, there were still a slew of players worth watching, and so I did.

The good and bad news of this camp is the presence of so many other people worth watching: The annual who’s who parade of college coaches filling the bleachers, the college campers running highly competitive games in front of dozens of NBA scouts, and the presence of guys named OJ, Chris and LeBron popping in for some run.

Without further ado, and in no real order, here’s what I’ve seen in my three days in Akron…

*Among the less famous coaching names in the building—his building, in a sense—is my man Keith Dambrot, the man who coached LeBron during his first two years at St. Vincent-St. Mary HS, and who’s now quietly building a consistent program at the University of Akron. Keith is good people, and he clearly gets a kick out of seeing the college gym he now coaches in covered with logos and banners of that skinny kid he first started coaching in a middle school youth league about 10 years ago.

*Craig Ehlo and Jay Bilas are among the evaluators evaluating the actual camp coaches—the system Nike has in place to ensure that basketball knowledge is being transferred as efficiently as possible. They evaluate everything here.

*License plate on a Maybach parked out front of the gym: KNG OF OH. Not sure who that belongs to.

*A high school age kid who’s tagging around with Craig Ehlo all weekend, kinda looks like Ehlo, and therefore seems like to be Ehlo’s son. He’s wearing head-to-toe Jordan gear. I don’t have a comparison to this in my own professional life, but if my son ever wore the clothes of a guy who had publicly disgraced me, I don’t think I’d appreciate it.

*Worldwide! In the gym. Of course.

*Sunday afternoon. The high school kids are going through positional drills… and there’s Chris Paul running off folding chairs and shooting 16 footers with the point guards… and there’s LeBron James shooting NBA threes with the wings. I’m never sure if this is humbling for the kids—”I can’t believe I’m running drills next to LeBron“—or if sharing the floor with them makes the kids think that getting to where Bron and CP3 are is actually easy. Either way, it’s fun to watch.

*Sitting in the stands mixed in with coaches and NBA scouts watching games on Sunday, I sneeze. Matt Doherty says “Bless you.” I’m totally rooting for SMU this year.

*Ron Harper in the house! He’s dressed like he just got off the golf course (down to the Titlist hat), which I later learn is because…he just got off the golf course. Apparently Ron’s life these days revolves around golf and little else. He sure as hell isn’t playing ball, based on the state of his jumpshot. He’s playing H-O-R-S-E with somebody and shooting horribly. I literally, literally could beat him at H-O-R-S-E tonight.

*Watching the positional drills on Monday morning. Say what you will about the whole summer camp scene, which still has its problems, but camps like these are the only chance the really good kids have to work—not just play, but work—against other really good kids. Watching the bigs bang into each other, they’re busting their asses and struggling to score. This will make them better, and they can’t find comp like this anywhere else.

*Monday night: The college campers are running over at the stunning Rec Center just across from Rhodes Arena. Word is that Bron will be coming through to run with them, and he does. He rolls in with CP3, as well as a couple of his boys: Romeo Travis and Brandon Weems, former high school teammates and longtime friends, both of whom played local college ball (Romeo was an All-MAC player at Akron who just finished a year playing in Germany, and Brandon led NAIA in assists while runing things at Walsh University). They round out their squad with Darnell Jackson, the former Kansas standout who got drafted by the Heat in the second round of last month’s Draft and then re-routed to the Cavs. They immediately get into a game against a squad of college kids.

This would become a theme.

I missed a couple of their games, but at one point I’m pretty sure the LeBron-Paul squad was 2-6 in round-robin play against the four other college squads in the gym. It was pretty cool to watch—the college kids were understandably hyped at the chance to show out against two of last year’s top-four MVP candidates, and they played without fear, which was great to see. Among the college standouts…

*Arkansas guard Patrick Beverly showing terrific quickness and competitiveness. He gave it to Chris once or twice.

*Stephen Curry, doing what you watched him do for a couple weeks in March, including a contested 3-pointer to beat Bron & CP3’s team in their first game.

*Xavier forward Derrick Brown also showing range and the ability to get to the rack. He also sends a Chris Paul layup attempt flying the other way.

*Louisville wing Terrence Williams has an NBA body, and he hits an NBA three over LeBron.

*Hasheem Thabeet is still really big, and he’s still learning to play. But he’s getting better.

*Arizona State’s James Harden didn’t show much when I was watching, but the buzz was loud on this kid the rest of the week.

*Also making cameos with the returning college kids was USC freshman-to-be Demar DeRozan, Memphis signee (and our outgoing Diary writer) Tyreke Evans, and, briefly, OJ Mayo. OJ rolled through quick before heading out to link up with the Grizzlies for summer league play. He looks ready.

*Needless to say, it was occasionally tough to focus on the high school kids, but I did my best. I’m not in the ranking business, and I’m always mindful of not judging a kid’s entire game based on three days of games with unfamiliar teammates. That said, here’s an alphabetical list of the players who caught my eye at one point or another during the week:

*Taran Buie, 6-0 junior G, Albany, NY: A good athlete with a nice-looking jumper. He’s also the brother of current Penn State pg Talor Battle, so I’m obliged to mention him. I do what I can.

*DeMarcus Cousins, 6-10 senior F/C, Mobile, AL: A top-three big man in the senior class, he’s got the NBA-ready size (a solid 269 with room for plenty more muscle), but in the time I see him this week, he too often settles for 17-footers. When he does get in the paint, it’s trouble.

*Aaron Dotson, 6-3 senior G/F, Seattle, WA: One of those kids who catches your eye doing the little things, with a resourceful offensive game that includes a nice pull-up midrange jumper.

*Roger Franklin, 6-4 senior G/F, Duncanville, TX: Every camp needs a kid like this. After I spoke on a media panel in which we tried to help the players learn how to deal with reporters, he made a point of finding me back at the gym and thanking me. It wasn’t necessary, but it was refreshing. What was more impressive was watching him a little while later in a halfcourt 5-on-5 defensive drill—every time his team got a stop, he was clapping and yelling. He’s also got a really nice game. I’m officially a Roger Franklin fan.

*Keith Gallon, 6-9 senior F/C, Oak Hill, VA: The Big Baby comparisons will come for this supersized big man (230 is an understatement, maybe by about 40 pounds), but he’s not nearly as skilled as Glen Davis at this point. He is strong as hell, though, and he boxes out pretty much without trying. Worth keeping an eye on.

*Michael Gilchrist (PICTURED ABOVE), 6-6 sophomore G/F, Somerdale, NJ: Oh my goodness, this kid’s precocious. You’d never guess watching that he’s one of the youngest kids here. Plays so confident, leads and finishes on the break. At one point, he was calling “Iso!” on consecutive possessions — this on a team of juniors and seniors who all think of themselves as potential McDonald’s All-Americans. Of course, on both of those isos, he got to the basket at will. He’s nice.

*Xavier Henry, 6-6 senior G/F, Oklahoma City, OK: A kid you’ll be hearing much more about in our magazine very soon. Henry is still playing on a bum ankle, and you can tell the way he limps around pre and postgame. On the court, the injury’s not obvious, but you can tell he’s not quite himself. Still, his size and athleticism—he’s probably the only non-big man in the HS ranks who could physically fit right in with the college campers—makes him tough to match. Offensively, he does pretty much whatever he wants. Great kid, too.

*John Henson (PICTURED AT LEFT), 6-9 senior F, Round Rock, TX: One of the longest players I’ve ever seen. Rail thin but all limbs, with the wingspan of a dude six inches taller. He’s quick and active around the hoop, meaning he does a whole lot of scoring from two feet and in. Very much playing to his strengths.

*John Jenkins, 6-3 senior G, Gallatin, TN: I don’t know much about this kid, but every time I looked up he seemed to be scoring. That can’t be a bad thing.

*Ezekial Marshall, 7-0 junior C, McKeesport, PA: A very raw big going who’s supposed to be coming to Akron. When he really learns to play, it should be fun.

*DeShaun Thomas, 6-7 junior F, Ft. Wayne, IN: This junior shows a lot of versatility: In one short stretch, I caught him scoring with a nice post move, then leading a fast break, then hitting a contested 18 footer. I’m reluctant to call his game complete, but it sort of looked that way.

*John Wall (PICTURED ON HOMEPAGE), 6-3 senior G, Raleigh, NC: Given the hype over how good he was as a junior and through the spring, I wasn’t totally blown away by Wall’s play here. Maybe expectations were too high, because he was really good, and showed flashes of his explosive lead-guard game. He’s got a shot at being No. 1 in the class, so trust we’ll be paying attention.

ALL PHOTOS BY KELLY KLINE/NIKE