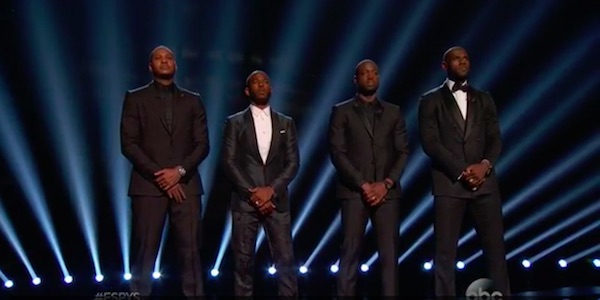 WATCH: "We all have to do better." – @KingJames #ESPYS https://t.co/PsqLjsutZg

After last week’s horrific events once again revealed many of America’s biggest problems, Carmelo Anthony called on his fellow athletes “to step up and take charge” and demand change. At the 2016 ESPYs, Melo took the call to action a step further when he, LeBron James, Dwyane Wade and Chris Paul stood on stage together to accept their roles as community unifiers.

WATCH: "The urgency to create change is at an all-time high." – @carmeloanthony https://t.co/V7KMxkibaV

WATCH: "Racial profiling has to stop… but also the retaliation has to stop. Enough is enough." –@DwyaneWade #ESPYS https://t.co/p7twmTjimT

Citing athletes who stood for civil rights like Jesse Owens, Muhammad Ali, Kareem Abdul-Jabbar, Jim Brown, and Arthur Ashe, the superstars said they would follow in their predecessor’s footsteps and be this era’s face of change. Sending a message to all the other athletes in the crowd and watching at home, the foursome challenged them to get involved in the communities that raised them and be a catalyst for change.