LeBron, Grant Hill and the Second-Greatest Video Ever 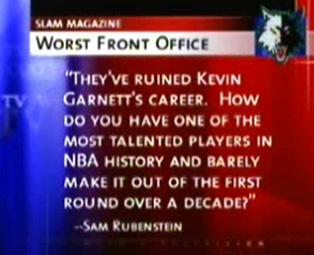 The internet is a strange place. On Monday, Sam wrote a post about the 10 Worst Front Offices in the NBA, ranking the T-Wolves at number one.

Then today we find this, the second-greatest internet video clip of all time.

At least they called SLAM a “well-respected and opinionated basketball magazine.” Probably won’t be respecting those comp issues in the Wolves front office anymore. Aren’t there more important things to report on the evening news in Minnesota?

Let’s get to The Links…

• Look who’s back: Grant Hill. As I wrote in the forthcoming SLAM NBA Preview, the NBA is a better place with Grant Hill in it.

• LeBron James has spent his summer building with captains of industry, taping a Letterman appearance to air tomorrow night and having lunch with Warren Buffett, the billionaire dude behind Berkshire Hathaway. Buffett apparently wore a LeBron jersey to the lunch.

• The Bonzi Bonanza continues, as the Heat now appear to be involved.

• The Mavs are looking to re-up with Josh Howard before the season gets cracking.

• The Oregonian’s story about the Zach Randolph situation, including a bit at the end about the Blazers PR staff sending their mascot and dozens of donuts to the police station. Meanwhile, Canzano talks to the accuser and spills even more details. Great story by Canzano.

• The Boston Herald still hasn’t fixed their picture of the guy who isn’t Sebastian Telfair. And Wally Szczerbiak says he’s all about L.I.

• Good news from Pittsburgh, where Sam Ashaolu is on the mend.

• At the behest of Ben Osborne, here’s a link about the latest class being inducted into the New York basketball hall of fame, including the one and only Mark Jackson.