Evolution of a Legend

A closer look at the evolution of LeBron James through the legends about him. 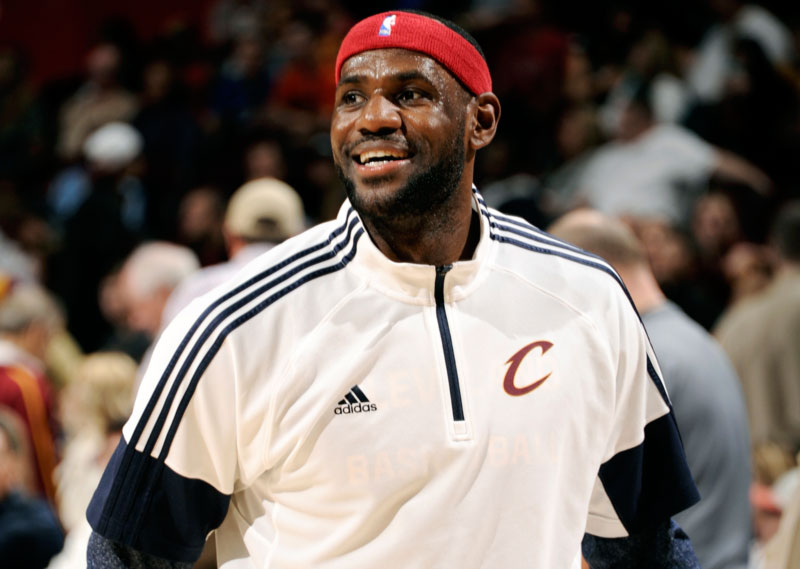 Like Dr. J, Bird, Magic and Jordan before him, there is a timeless quality to LeBron James’ game. Future stars will be bigger, stronger and quicker, but we won’t again see his specific combo of skills, flow and panache.

There is also a timelessness in his life story, a tale of hardship, perseverance and camaraderie which seems to stay fresh no matter how many times it’s retold. With every twist of his career, each rendition gains an extra layer of meaning. The latest example, a 30-minute TV show, premiered Sunday night on Disney XD. It highlights the joyous reception James received from his hometown community of Akron, OH, as he enters a Savior 2.0 Era leading the nearby Cavaliers from conference bottom dwellers into a season where they are now favorites to win the title.

The show, the first in a series named Becoming about the lives of popular athletes, spotlights the neighborhoods in which LeBron grew up and his alma mater of St. Vincent-St. Mary High School. Much of the material will be familiar to LeBron fans—the hard-knock beginnings in a single-parent home, early dominance on the AAU circuit and finding lifelong friends there who would form the nucleus of one of the greatest prep basketball dynasties ever.

While the themes are familiar, it appears this is the first time some of the footage shown from James’ elementary and middle school days has been made public. It helps the video was co-produced by ESPN Films and James’ own Springhill Production Company, which has an office in his hometown of Akron, OH. Becoming is meant to appeal to younger viewers, but this show’s sharp production quality and rare footage make it worth any NBA fans’ while.

While this episode—which premieres on ESPN on November 7—is the latest LeBron bio, there have been a handful of accounts which involved direct access to James and his inner circle. Each one offers something new—fragments of anecdotal gold not found in the others that are worth recalling as James and the Cavaliers start the 2014-15 season as the feel-good story of the year. Here are some of the most interesting: 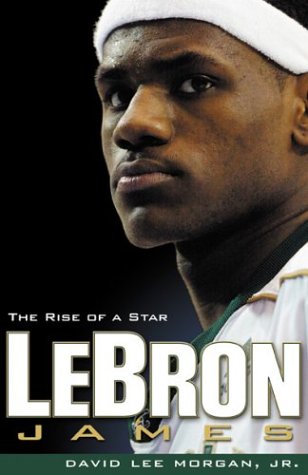 Book: The Rise of a Star: LeBron James

One reason James became so good, so fast, was that a former Division I head coach pushed him early on. Keith Dambrot, former coach at Central Michigan, was James’ high school head coach during his freshman and sophomore years.

Less known is that a woman coached James during his freshman season. Amy Sherry, a two-time MAC Player of the Year from Kent State, was one of two paid assistant coaches on Dambrot’s staff. It has taken 15 years, but the NBA is now following suit. In August, the San Antonio Spurs hired Becky Hammon as the league’s first full-time female assistant coach.

It seemed everyone wanted a piece of LeBron his senior year. He got calls seeking his presence from the likes of The Late Show with David Letterman, The Tonight Show, Good Morning America and Live with Regis & Kelly. A packed schedule meant LeBron often had to say “no.”

Comedian Martin Lawrence sought more than just a guest spot, according to Morgan Jr, then an Akron Beacon Journal reporter. Lawrence’s production company called about a movie Universal Studios would finance. Although LeBron hadn’t yet announced he was skipping college, Lawrence’s movie would star him as a baller going directly into the NBA from high school. “Even LeBron laughed about this one.”

Pre-NBA LeBron was a beast of historic proportions in both high school and the summer circuits. Among his most impressive feats came after his sophomore season, when he dominated two age groups at Pittsburgh’s prestigious Five-Star Camp. He excelled in his own age group and the one for rising seniors, playing in both leagues’ All-Star games. “No one has ever played in both before LeBron, no one has done it since, and I doubt if anyone will ever do it again,” said Howard Garfinkel, the camp’s longtime director.

Until that point, Garfinkel had seen about 125 players from his league eventually make the NBA. James was in the mix for best prep player he’d ever seen, but another No. 23 edged him out. “I’m not going to say he’s the best, because I saw Calvin Murphy score 34 points in an All-Star game one night, then have to travel to Allentown, where he scored 62 points in 29 minutes the next night in a major All-Star game. On the next level, you have Wilt Chamberlain and Connie Hawkins.”

Murphy, a 5-9 dynamo who would go on to star for the Houston Rockets in the 1970s, became the first Hall of Famer to wear No. 23 throughout his career. 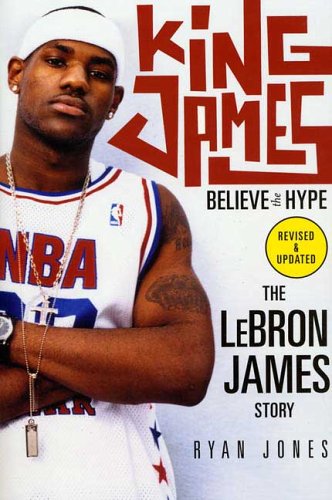 The summer after James’ sophomore season, SLAM became the first national magazine to publish a feature on him. SLAM’s Ryan Jones visited St. Vincent-St. Mary to report on a prodigious 16-year-old still a half year away from the famous Sports Illustrated “The Chosen One” cover story.

In the school’s gym, during the off season, Jones saw James settle “for long jumpers on offense or gave lackluster effort on D, and anyone seeing him for the first time that day would likely have come away unimpressed.”

Jones adds James looked like “he’d rather be home with a PlayStation controller in his hands, or at the mall with his boys, anywhere but another afternoon in the gym.” In short, he was not giving 100 percent. Which is something 99.9 percent of teenagers do a lot of, except maybe a certain iconic juggernaut to whom James has always and will always be compared.

“Stories of Jordan lolling through even the most casual of runs simply didn’t exist, and indeed, tales of his relentless tears through off-season games were legendary…In such a setting, there was nothing more at stake than pride and his own bitter hatred of losing; what made him truly great was the realization that those things motivated more than any ring or trophy ever could.”

If this lackadaisical approach had been an rare off-season scrimmage thing, nobody should care. But “coupled with whispers that even during the high school season, he was known to take plays off and cherry-pick on defense, [it] might be proof of a deficiency.”

Fast forward 13 years and occasional criticism is still lobbed LeBron’s way for not getting his Great White Shark on, all the time, anywhere, as MJ did. “But there are different ways to hunt,” James told ESPN’s Chris Broussard last year when asked about this perceived weakness. “Lions do it strategically—two females will lead, and then everybody else will come in. Hyenas will just go for it. There are different ways to kill, and I don’t think people understand that. Everybody wants everybody to kill the same way. Everybody wants everybody to kill like MJ or kill like Kobe. Magic didn’t kill the way they killed. Does that mean he didn’t have a killer instinct?” 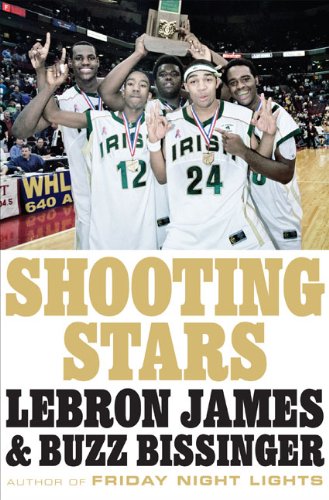 James was the most intensely covered high school athlete of our generation. Before he made tens of millions of dollars for himself as a professional, his talent and celebrity made tens of millions for others. Ohio’s high school athletics association suspended him during his senior season for accepting jerseys for free at a sporting goods store, arguing he was no longer an amateur for capitalizing on his athletic fame.

If all that coverage went to his head in high school, why wouldn’t it still affect him today? Whether his ego was/is huge or not, history has shown one thing is clear: James’ teams win the most when he is surrounded by similarly aged teammates/friends who keep him grounded. In high school, that included classmates Sian Cotton, Dru Joyce III and Willie McGee. In Miami, that was Chris Bosh and Dwyane Wade, who like him are married with young children. How James now meshes with younger, more single stars like Kevin Love and Kyrie Irving off the court will determine much of Cleveland’s success. 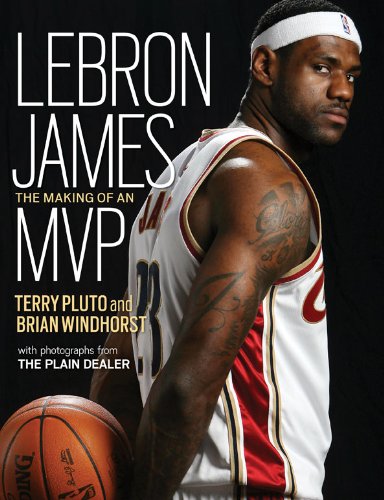 In an alternative universe, this year’s Cleveland Cavaliers could have the first NBA frontcourt to boast two NFL quarterbacks. Let’s start 6-10 Kevin Love who, of course, would have to get used to throwing downward, but if his deep outlet passing is any indication, he could train to be one of the game’s most accurate passers. Rick Carlisle certainly thinks so.

With his athleticism, LeBron would even be more hypothetically devastating. He was all-state wide receiver in high school as well as a superb scout-team quarterback. Jay Brophy, who coached at SVSM after playing four years in the NFL, told Pluto and Windhorst he’s convinced LeBron could have been a Division I college quarterback. “I saw him throw it 70 yards,” added Mark Murphy, a 12-year NFL pro who became another SVSM football coach. “He was quick, had a really strong arm and he was tall enough to see over the linemen.”

James, for one, believes he could have played at the highest level. “I would have been pretty good if I had decided to go for it,” he told NFL.com. “I can see and read plays. I study a lot, so I know defenses and things of that nature.”