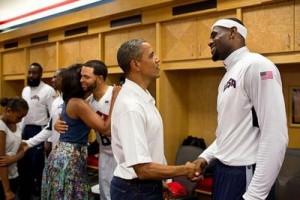 Michael Jordan remained largely apolitical throughout his NBA career, as he felt this was the best way to protect his business interests off the court. Jordan became infamous when he uttered the line, “Republicans buy shoes, too.”

Unlike MJ, LeBron James has no issue with making his political stance widely known — LBJ has once again put his support behind President Barack Obama, and says that he faced some pushback for being so open about who he voted for.

The Miami Heat star makes many millions off his endorsement deals, including one with Nike. But there’s one other particular endorsement he isn’t shy about making news with, regardless of its negative impact on those deals — he’s once again voting for Barack Obama for President. “I’ve been second guessed,” James said. “They’re saying it’s bad for the brand. If I feel like I want to support someone, then go for it.”

James said he carefully researched Obama before he voted for the Democrat in 2008. He’s done that again this time. “No,” James said about not being afraid as an athlete to take a stand. “I just think it’s about knowledge if you know what’s going on. I’ve always said I feel like it’s important for me to do it because that’s just who I am. I got out there and I learned a lot about it in ’08 and I learned a lot about it now.”

Many other NBA players clearly feel the same way that LeBron does, and they haven’t shied away from chiming in (and supporting candidates) during this election year, especially in the digital realm.

LeBron James and his counterparts have a large platform from which to speak, and they’ve elected to make their voices heard. One gets the sense that this is a step in the right direction.