LeBron James on Kevin Durant Feeling Pressure to Win Title: ‘When I Retire’ 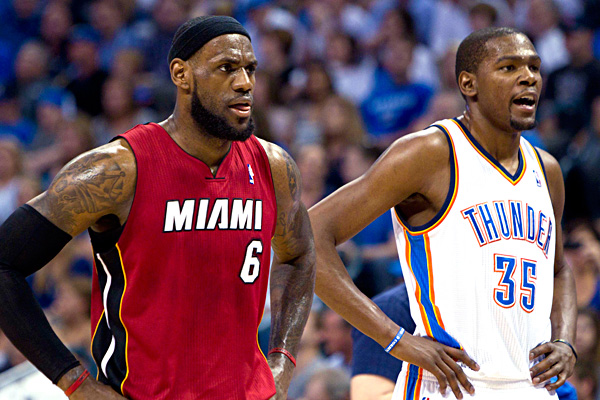 Kevin Durant has done everything to deflect the pressure every transcendent NBA player feels to win a championship. According to his buddy LeBron James, KD won’t truly feel it until James is out of the League.

LeBron shouldered the expectations and unrelenting scrutiny from fans and media for nearly a decade before winning his first title, and thinks it’s unfair to judge a player’s greatness solely by looking at his trophy case.

“When I retire,” James said. “When I retire. They’re still talking about, am I going to win a third? You know…”

“But I think, for him, obviously he’s an unbelievable player,” James said. “And I’m one of the guys that just don’t, I don’t believe that winning a championship defines your career, you know. There’s so many greats that never won, and it’s unfortunate that they didn’t.”

“But I don’t know when he’s gonna start hearing it,” James said of his friend. “I hope he doesn’t. I don’t think he should have to go through that. What he’s been able to do for that city of Oklahoma City, what he’s been able to do for his teammates is amazing. And we’ll just see what happens with it. He’s going to be in contention every year because of the player that he is, and they’ve got a great team. And we’ll see what happens.”

Kevin Durant pays attention to the debate, but he’s not interested in engaging:

Durant asked about ‘back-and-forth’ between heim/LeBron this yr. KD: “There’s no back-and-forth. I haven’t said anything. Just him talking.”

Durant is now in his seventh year, and with each passing season, the pressure to win it all will only increase (yes, even with LeBron still playing.)

It may not necessarily be fair, but it’s the way things are.