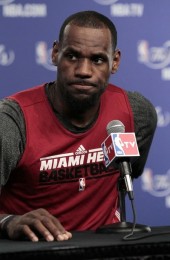 LeBron James is a man at peace with his life and basketball career. So much so, that he’s willing to admit to the world that he played poorly in last year’s NBA Finals, and that he didn’t come through for his teammates against the Dallas Mavericks.

Given another shot at the championship and ultimate redemption, LeBron is determined not to allow what took place last year to happen again.

From the Sun-Sentinel and Miami Heat:

“I didn’t play well,” James said. “I think I said that 100 times this year. I didn’t play well. I didn’t make enough game-changing plays that I know I’m capable of making, and I felt like I let my teammates down. I don’t know. I don’t know if that’s something I haven’t said before. Just didn’t make enough plays … I’m happy and I’m humbled that I can actually be back in this position less than 12 months later, to do a better job of making more plays, more game-changing plays out on the floor on a bigger stage.”

Chris Bosh was asked after James scored a game-high 31 points to eliminate the Celtics on Saturday what he thought was accounting for James’ gargantuan postseason. “You have to credit all the times that he just thinks about what happened last year,” said Bosh. “When that moment [to get back to the Finals] comes again he had to seize it. And now we’re in that moment.”

LeBron James is on a mission this postseason, and he will likely be dominant against the OKC Thunder. But will that be enough to win it all?

If anything, it’s LeBron who will need his teammates not to let him down this time around.