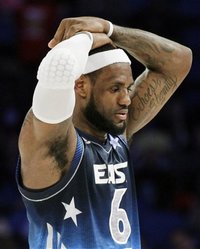 Widely considered as the best player in the game, but having never won a championship, even an otherwise meaningless contest such as the NBA All-Star Game serves as some kind of referendum on your legacy.

James coughed up the rock in the dying moments last night, his turnover ensuring a last-second victory for the East All-Stars, and everyone – fans, media, and even rivals on the court – wondered why LeBron didn’t hoist up a three-point attempt to tie the game.

According to LBJ, he screwed up the game’s final possession.

LeBron on final seconds of All-Star game: “(Kobe) was telling me to shoot it. I seen my teammate open for a split second. I seen him open the first time and I didn’t release the ball.”

“When I tried to throw it late, that’s what usually happens and it results in a turnover. Definitely wish I could have that one back.”

Truth be told, LeBron James wasn’t the only one who made errors late in the All-Star Game. Kobe Bryant missed a critical free throw that gave the East a chance to tie things up, James’ own teammate Dwyane Wade also had a costly fourth quarter turnover. But, all anyone will remember is what seemed like an unwillingness on LeBron’s part to play the role of closer (hero, alpha male, whatever …) that drives people who care about the NBA batty.

And, unfortunately, universal perceptions won’t change until LeBron James wins a title, while taking and making big-time shots along the way. It’s not fair, but hey, that’s life.