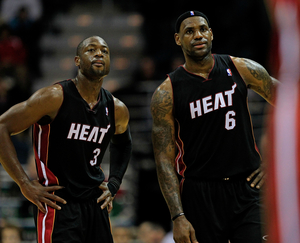 The Miami Heat have some difficult decisions to make in the coming months.

With Dwyane Wade having the option to become a free agent next summer, there’s no telling what kind of money (or how many years) both sides will agree to.

According to LeBron James, Wade should get a contract similar to what Kobe Bryant got from the Los Angeles Lakers ($48.5 million over two seasons).

“D-Wade is getting that Kobe deal,” James said from the next locker. Wade, knowing the gravity of this issue, smiled and shook his head. Then he gave a more diplomatic answer. “When I get into that position, it’s something I’ll think about,’ Wade said. ‘You have to sit down at the time and see what is best for you and for your team.”

Here is the situation. Next summer Wade has an opt out in his contract. He is owed $20 million next year and $21 million in 2015-16. It is reasonable to think that Wade, who turns 32 in January, will not opt out and just collect that money. But Wade could also re-do his contract and, if the Heat agreed, get a four-year deal worth up to nearly $100 million. Or the sides could do a deal for anything in between. Basically, the Heat could ask Wade to take a pay cut and make it up to him by adding years to his deal. That is what Wade and the Heat will likely have serious discussions about at some point before he has to make a decision on June 30. What Wade decides could have a significant impact on how the Heat proceed into next season. And Bryant’s new deal sets an interesting precedent. Bryant is taking a pay cut next season from his $30 million salary but he will still be the league’s highest-paid player through 2016. The contract was somewhat controversial because it restricted the Lakers’ cap flexibility even as they plan to rebuild through free agency. […] “As a player, I loved it. Everyone who gets what they get deserves it, great,” Wade said of Bryant’s new deal. “There’s a reason the Lakers felt that Kobe should get that money. There’s no right or wrong.”

Interesting times ahead for the defending NBA champs and their long-time superstar.