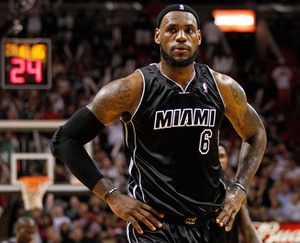 LeBron James has a well-documented obsession with Michael Jordan — he wore MJ’s iconic #23 when he entered the League, and continues to watch old Jordan games in his spare time.

LeBron, however, doesn’t approach the game the same way Michael did — or how Kobe Bryant does, for that matter — and James explains that his method works just fine.

The whole interview is pretty great, and offers rare insight into LeBron’s mind: he says that Allen Iverson was his second favorite player growing up, admits that his biggest obstacle is an enormous fear of failure, and reveals plans to become an even more punishing post presence.

Michael Jordan’s legacy is obviously secure, and his army of supporters may never agree to place anyone alongside their hero. LeBron James is making his own case, and has proven that he doesn’t need to be like Mike in order to be considered among the greatest NBA players ever.