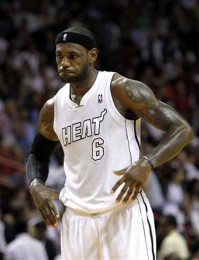 Taking a page out of Kobe Bryant’s book after a tough loss, LeBron James went back out for a tough postgame workout.

He was that angry following the New York Knicks’ convincing win over the Miami Heat last night. James was especially upset by the fact that New York has had its way with the defending champs in their first two meetings this season.

LeBron says the Heat need to improve, and that it starts with himself (this, despite posting 31 points, 10 rebounds and 9 assists.)

After Tuesday’s loss to Washington — Washington! — Heat players didn’t exactly project an aura of concern. In fact, what got them most irritated was when reporters followed up on Erik Spoelstra’s press conference by asking if the loss qualified as a lesson. Thursday’s locker room was quite a bit different. For the fourth time this season, and the second against the Knicks, the Heat was routed.

Or, as LeBron James put it after putting himself through a postgame workout — as if he, with 31 points, 10 rebounds and nine assists was the problem — “They kicked our ass. They have pretty much dominated us in two games.” That’s the reality, and Thursday the Knicks did so without Carmelo Anthony, hitting 18-of-44 shots from behind the arc. “We’ve got work to do,” James said. “We can’t act like, OK, let’s just sweep this under the rug. We’ve got a lot of work to do. New York is a real team, they’ve got some real good players, and we understand that.” Why did James work up a postgame sweat in the weight room? “I’ve got to be better,” James said. “I’ve got to be better. It’s that simple. I’m here, and I’m the last one to leave.”

Dwyane Wade and Chris Bosh’s struggles aside — LeBron’s two sidekicks only connected on 6 of 25 shot attempts — the Miami Heat’s problems were mostly defensive: they gave up 112 points to the short-handed New York Knicks, and watched them rain in 18 threes.

LeBron James is trying to set a different, more aggressive tone for the complacent Heat. They have plenty of time to get their act together, but these types of lackluster performances are no longer easily brushed aside.