The Land prepares for LeBron's return to the postseason in a Cavs uniform. 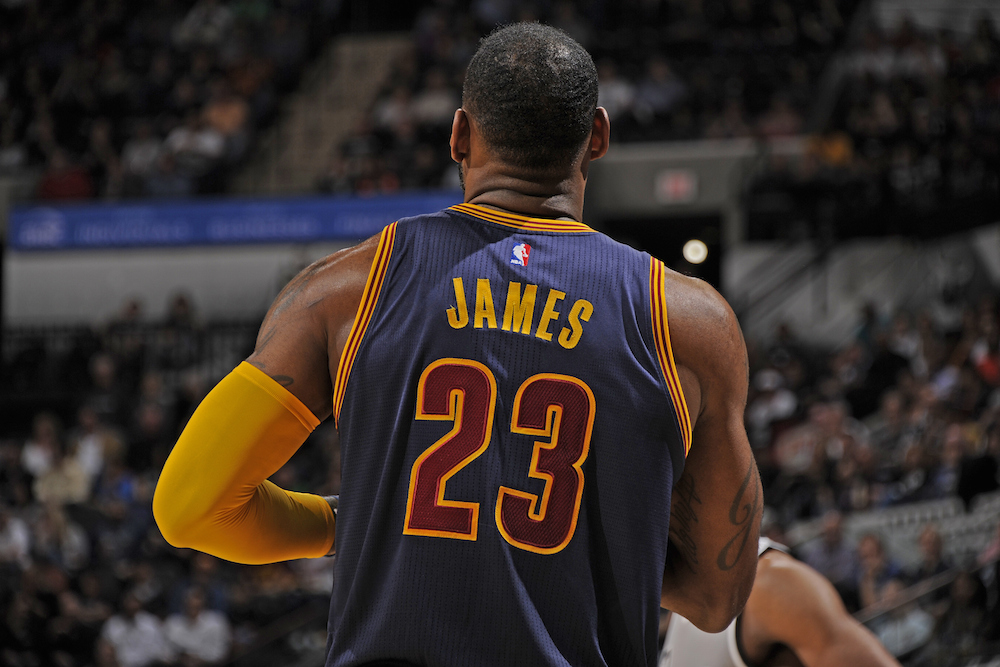 The Cleveland Cavaliers had stumbled to a record of 19-19 by January 12. The following night, despite 33 points, seven rebounds and five assists from LeBron James—who was playing in his first game back after missing the previous eight due to injury—the Cavs lost again. Markieff Morris hung 35 points on Cleveland, and the Cavaliers lost this time to the Phoenix Suns, dipping below .500 at 19-20.

Coach David Blatt’s NBA resume was all of a sudden being questioned, and well-founded speculation about his job security was beginning to hum. Two days later though, the Cavaliers returned mercifully to five hundred with a 109-102 win in LA, despite 19 points and 17 assists from Kobe Bryant. Blatt’s revamped and healthy roster would continue to win into February, collecting 12 straight wins before rounding out at 43-25 with recent wins over Dallas, San Antonio and Orlando on the road.

James, Kyrie Irving, Kevin Love and the Cavaliers will return home after a matchup in Miami tonight for a date with the Nets, and the energy and enthusiasm throughout “The Land” is beginning to rise. Cleveland has not hosted a playoff basketball game since 2010, and a deep run in the Eastern Conference is appearing more likely by the game. The result has been a home-court advantage that 15-year pro and NBA champion Shawn Marion knows will be critical come playoff time.

“The energy has been electric at the Q,” Marion recently told SLAM. “The way the fans give back and support the team, it creates a momentum all around that we have right now. It’s great. We just gotta keep it up. Keep it moving, keep helping each other and keep getting better.”

The Cavs have compiled a 24-9 record at home this season, balancing out an average road mark of 19-16. But with the No. 2 seed within reach, and the top-seeded Atlanta Hawks appearing to pose the only real threat to Cleveland in the East, excitement is mounting in Northeast Ohio.

“The energy inside the building really has been incredible,” DJ Steph Floss, the Cavaliers’ in-arena DJ, agreed. “It really is getting louder and louder, which is crazy when you think about how hype it’s been this season ever since opening night.”

Steph Floss has made a point of sprinkling in music from local products like Machine Gun Kelly and Stalley during the recent stretch of Cavaliers victories. Just as Marion has helped keep the reserve unit engaged during a 12-game stretch sidelined with a hip injury, Floss has been doing the same with the fans.

“I think Steph Floss has been doing good job of keeping everybody into it,” Marion added. “He asks the guys what they want to hear. He plays the new current stuff, throws back with some old stuff. He plays a variety and it’s cool.”

The other half of Floss’ DJ team “It’s The Good Guys” is friend and fellow longtime Cleveland sports fan DJ Jameel, aka Meel, who said winning has helped everybody feel a little bit better about things in their hometown lately.

“It’s good to always have some winning going on,” Meel noted. “When you win, everyone in the city is just generally happier. Whether it’s the Browns, Indians or Cavs, it’s just better when our teams are winning because we are so sports-driven in Cleveland. We’re hard-workers. Those are like our high school teams. We feel like we know our franchises like the back of our hand. So for the Cavs to be winning, with a player like LeBron, it’s just very important. He’s one of the biggest athletes ever, and he’s from our community.”

In particular, MGK’s smash hit “Till I Die,” which pays homage to the legendary Bone Thugs N Harmony while also shouting out multiple neighborhoods and streets around Cleveland, always gives the home town crowd a boost.

“That song, if you’re from Cleveland it gives you something to be proud of,” Meel added. “Especially if you see the video on MTV or hear it being played at somewhere like the Q. It gives you goosebumps. It’s just all a good look for the city of Cleveland right now.”

On the court, meanwhile, LeBron has turned things up since returning from back injury. He’s scored 30 or more points 11 times and currently ranks third in the league overall behind Russell Westbrook and James Harden at 26.1 per night. He also ranks seventh in assists (7.3) and is collecting 5.8 rebounds per game.

Coach Blatt’s squad, after getting a healthy James back and adding JR Smith, Iman Shumpert and Timofey Mozgov now ranks third in offensive efficiency (108.2) and fourth in true shooting percentage (55.7 percent). The one area the Cavaliers will need to tighten up collectively before planning the ultimate celebration, though, is on defense. The Cavaliers rank in the bottom third in defensive efficiency and will need to clean that up considerably during the next few weeks.