LeBron James: The One 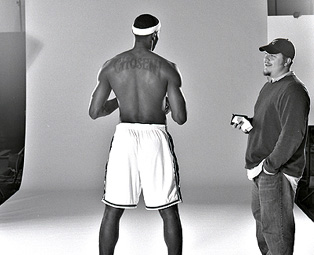 The truth is, when I went to Cleveland a few weeks ago to talk to LeBron James for the cover story in SLAM 106, I didn’t have much of an idea regarding what I should talk to him about. The thing with LeBron is that nearly everything has been written, at least as far as his past goes. ESPN the Magazine pretty much publicly admitted they had no idea what to with LeBron when they did their cover with him before the season started. The big cover line read: “Is LeBron Mean Enough?” The cover image was LeBron in front of a plain background with a smile on his face, a word bubble coming from his mouth with the words: “I like to share the comedy.”

What does that even mean? Is LeBron mean enough to do what? Win championships? Because that Magic Johnson guy wasn’t exactly known for being mean and he did OK for himself.

Anyway, all that to say I didn’t have much of an angle for the story going in. I did know that I wanted it to be more about LeBron right-now-in-this-moment than most of our past stories have been, and a little heavier on the basketball stuff than we’ve previously been.

From the time I knew I was writing the LeBron story to the time I went out to Cleveland to talk to him, I DVR’d and then watched a ton of Cavs games with a notebook at my side. And the one thing I kept noticing over and over was how big a part LeBron’s patience plays in everything the Cavs do offensively. At the time, the Cavs were really struggling offensively. So that became a big part of the story, as well as a lot about how the Cavs use LeBron. Mike Brown told me he’s calling about 30 percent fewer plays for Bron than they used to call, which seems impossible because he still gets touches nearly every time down.

The other thing that jumped out at me was how the team didn’t seem to be putting much stock into the regular season games. You’d read in the papers about the players joking around after losses, and Mike Brown would get wildly fired up after random games, which seemed like a way to try to keep the team focused. After spending some time in the Cleveland locker room on the road, it became obvious to me that they’re coasting a little bit right now, waiting for the postseason to try and turn it up a notch. And LeBron didn’t exactly discount that theory. (Although Mike Brown nearly had a heart attack when I asked him about it.) That’s all in the story as well.

There was a constant stream of stories at the time I was working on this insisting that LeBron was tired. His numbers were down, sure, but to me that seemed more like a function of the team using Bron differently.

So one night after a Cavs win I asked LeBron if he was tired.

Another thing LeBron talked about that I found intriguing was when he said never really felt the Cavs were his team until the Playoffs last year. And when did the Cavs turn things up and surprise most of the NBA? Some timing there, huh? More on that in the story, too.

We had a cover concept for Bron: Recreating the NBA logo, or at least something similar to

it. This is LeBron’s team, and going forward it’s going to be his League. Also, it just seemed like a cool idea for a cover, and one that we’d never done before. We actually went to the NBA to make sure they wouldn’t sue us for doing it, then ran with it. The story goes into a lot more detail about the actual shoot, but it’s safe to say LeBron turned out to be much better at art-directing the shoot than we suspected he’d be.

One thing that always plays a part in anything we do is access — specifically, how much we get (or don’t get) with a particular player. I’ve had five minute with Rasheed for a cover story, I’ve had full days with Steve Nash in Canada. It depends on the player, it depends on his schedule, it depends on how he’s getting along with us at the moment. LeBron’s always been great to us, in large part because we did that feature on him at the beginning of his junior year in high school, when he was still largely unknown. But getting guys to sit down in the middle of the regular season is always tough, and the day LeBron wanted us to come out for the shoot was no different, because it was in the middle of a bunch of Cavs games, the day after a road game, and the Cavs had practice that morning and then LeBron had to do a photo shoot “as a favor to Nike” before coming to see us.

We set up all our photo gear on their practice court (where the Cavs don’t practice, for some reason) and waited for Bron. From where we were I could see the Cavs practicing on the main court there at the Q, and then could see LeBron rushing through the other shoot, and I could see a pack of reporters nipping at his heels as he walked quickly off the floor to put on his game uniform for our shoot.

When he showed up for us, we did the shoot and I talked to him throughout the shoot, then talked to him for a while after the shoot. A few nights later the Cavs played in New Jersey, so I went to that game and after he talked to the general media he allowed me into his little private area to lob questions at him for ten minutes while he got dressed. One week later, I went to a Cavs/Hawks game and Bron gave me another chunk of his time postgame. All told, over three cities I probably got about an hour of interview time with him. Considering one of the bigger magazines once did a cover story with Bron off a 15-minute interview, it was a relative gold mine of time.

While we were doing the photo shoot, word came down that Carmelo was being given a 15-game suspension. This became the off-the-record topic of the afternoon between me, Bron and his LRMR crew. That will all go down in the “Things I Can Never Write About” notebook, on the page right after the night I spent gambling in Vegas with the Olympic Team.

One last thing: LeBron is really frigging good. We’ve all watched him play for a while now, but I’d never really immersed myself in all things Bron. And when I’m working on a story on a guy, that’s what I try to do. So I spent one entire Saturday watching tape, from morning to night. And I kept finding myself going “Oh!” or “Ah!” out loud. (I’m pretty sure my wife thought I was watching a different kind of tape.)

My outbursts weren’t from dunks or wildly physical plays (though there were plenty of those) so much as the little things. More than once I saw LeBron, in the middle of running a wing on a break, shift himself over left or right by a couple of inches. It was a miniscule amount of moment, but once he got to the basket he was zipping in at the perfect angle. He’d noticed this 40 feet earlier and made the adjustment.

I could go on all day, but that wouldn’t be fun for you guys or for me. Just go out and cop the issue. Officially the issue drops Feb. 6, but you’ll be seeing it everywhere soon, maybe even this week. Oh, and this is the SLAM remix issue. After 105 issues, we finally shook things up between the covers. Things look pretty different, sections have changed.

You can even read an entire article written by Sam Dalembert extolling the virtues of virtual servers and CCNA certification. No lie.

And if that’s not what’s up, I don’t know what is.