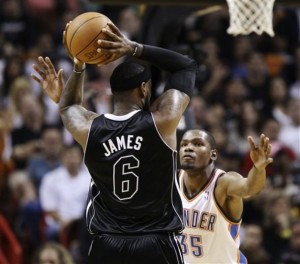 The two best players in the League are going to duel it out for the ultimate prize, starting tomorrow night in OKC. Kevin Durant and the Thunder are awaiting LeBron James’ Miami Heat, on the sport’s biggest stage.

And both superstars – who famously worked out together in the offseason, on and off the basketball court – say they’re ready to fully embrace the challenge.

James played at a rarely seen level in the Eastern Conference finals against the Boston Celtics. James is the first player since Shaquille O’Neal in the 2000 finals to have six 30-point games in a playoff series. In the one contest where James didn’t score 30, he finished with 29 in Game 4, fouling out in overtime. “He was absolutely brilliant this series, and we all know it,” Heat coach Erik Spoelstra said. Criticized last season for deferring too often in crucial situations, James went into the offseason driven by the pain of failing in the NBA finals. In the [workout[ sessions with Durant, they pushed each other to the limit. ‘Me and KD, man, just tryin’ to get better,’ James said … ‘I envisioned it every day we worked out,’ James said. ‘I understood what his passion was. I understood what his drive was.’

“It’s going to be a battle,” Durant said. The Heat and Thunder split two games during the regular season, both winning at home. Durant scored the most points in the NBA this season at 1,850, James was second with 1,683. James won the MVP award, Durant finished second.

The winner of this NBA Finals won’t be determined by who wins the matchup between LBJ and KD – those two are more than likely to cancel each other out – but by who else steps up on either side.

However, let’s not kid ourselves. In terms of storylines, this all about Kevin Durant and LeBron James, arguably the most riveting superstar showdown for the championship since Michael Jordan and Magic Johnson in 1991.

Not too bad a finish to a season that was nearly wiped out by the NBA Lockout.