Meet the Star of the ‘LeBron Jaaaames’ Vine 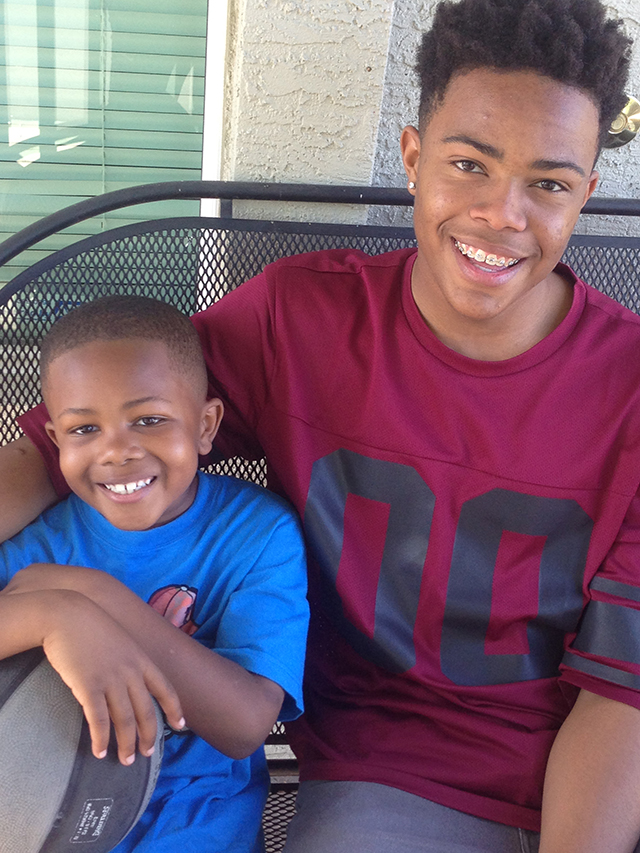 Terrance Jackson wants to clear something up.

“He’s such a liar!” Terrance Jackson says. “Ben McLemore is my second-favorite.”

I ask Terrance who his first-favorite is.

Terrance Jackson is 7 now, meaning he was 6 last summer when his endearing, sing-songy, ever-so-slightly peculiar pronunciation of a certain NBA superstar’s name caught his big brother’s attention. “He says a bunch of things in goofy ways,” Darius Jackson says. “Nobody in my family talks like that. He just does that out of nowhere.”

As Darius, now 17, remembers it, his little brother heard LeBron’s name uttered on TV at some point last June, and, as 6 year olds will do, he started randomly parroting what he’d heard. Not long after, the boys were in the family car on their way to their grandmother’s house, and as Darius remembers, “he just kept saying it over and over again.”

The boys’ mother, Valerie Byrd, remembers it well. “He just kept saying it and saying it, and we were like, ‘Terrance, why are you saying it like that?'” Valerie says. “He said, ‘I don’t know, Mom.’ Well, Darius, he’s always picking on him, so he just decided to record him. Darius is a jokester. If he’s sitting around not doing anything, he’s recording his little brother.”

(Darius is pretty active on Vine; at the time, Valerie admits, “I didn’t even know what a Vine was.”)

Once they got to Grandma’s house, Darius gave Terrance some direction. “I thought it would be funny doing it like that, saying it over and over, having him in different positions,” Darius says. “I filmed it all at one go.”

What he filmed was nothing more complicated than his 6-year-old little brother, standing on a sidewalk in front of his grandmother’s house, saying “LeBron James” five times. The first shot shows off Terrance’s bright blue Nike basketball-with-headphones t-shirt; the second is a slightly closer take; the third, a tight shot of his face. In the fourth shot, Terrance is sitting down.

The fifth shot, the last one, well, that’s the one that makes it.

There’s Terrance, his face in shadow, head titled onto his shoulder, leaning hard on the side of a pick-up truck. This time, his sing-song delivery has changed. It’s the last note of a chorus, and it’s lower and deeper; suddenly, Terrance is a young Barry White.

It’s unexpected and hilarious, and the timing—the way “James” cuts off right as the end of one loop bleeds into another—makes it that rare, magical Vine that begs infinite viewings. Somehow, it is always, always funny.

“The way he says it the last time, he was tired of doing it, so he just did it like that,” Darius says. “And it all came together perfect.”

The world was slow to appreciate these six seconds of genius. Darius says he had about 200 followers at the time, “mostly just friends and family, people I know.” One of those, a friend he’d gone to school with, kept tagging it because “he said it should be famous.”

It took a few months before it finally started to blow; as Darius remembers, one of those countless World Star knock-off accounts tweeted the Vine with a caption—”something like, ‘When I put on SportsCenter, all I hear is…'” Darius says. “I saw it when I came home from school. One of my friends messaged me and said, ‘You made it.'”

Soon enough, it was everywhere, with all the attendant signs of world domination. It inspired parodies. It became a meme.

“I’ve seen so many of those,” Darius says. “They just find the goofiest people to say ‘LeBron James.’ But I like the edits and stuff, when people make songs out of it. And the pranks they do on teachers, the one where all the kids play it in the classroom? That’s one of the best ones I’ve seen.”

For the most part, the parodies and memes only reinforced the accidental genius of the original, and further contributed to Terrance’s fame. His classmates recognized him, and then other kids at his school did, too. Perhaps the highlight for Terrance was the opportunity to hang out with the sixth graders at recess; try to remember how it felt being a second grader, and how cool it would feel to get an invite from the kids four grades above you to chill on the playground. “All the sixth graders know me now,” Terrance says with justifiable pride.

It’s not just at school. People recognize him at the barber shop. Friends and family from all over—her girlfriend across town, her nephew in Atlanta—tell Valerie stories about how they’re all cracking up watching Terrance. One of them was Terrance’s youth basketball coach, who was too busy laughing to realize he knew the kid in the Vine.

There have been some drawbacks; Darius has learned not to pay attention to the comments (at last count, the Vine had about 44,000 comments, along with 683,000 likes, 485,000 revines, and nearly 36 million loops). “People hate on him because his lips are dry, or because of the gap between his teeth,” Darius says. “I mean, he’s a 7-year-old kid! But it doesn’t really bother him.”

If anything, the worst part is the pressure on Darius. He’s up around 22,000 followers now. “I used to Vine all the time, just little silly things,” he says. “Now that it’s such a big audience, I don’t really know what to post. But I do know, whenever I post a Vine of Terrance, it does a lot better.”

Darius is smart enough to realize that trying to catch Vine lightning in a bottle a second time is destined to fail. “People always say, ‘Have him say other basketball players’ names,’ but I know it wouldn’t be as good. It wouldn’t be the same.” He did create a ringtone, available on iTunes, but otherwise, he’s living his life, not minding the steady reminders of his Vine directorial fame.

As for Terrance? “He’s just a little character,” Valerie says. “He’s 7 years old, he enjoys the attention. Just yesterday, he had everyone busting up at the dinner table with something he said.”

As we wrap up his first-ever interview, I ask Terrance what he’d say to his favorite player—again, no disrespect, Ben McLemore—if he ever had the chance to meet him.

“I’d tell him I was the kid who did the LeBron James thing.”

And what do you think LeBron James would say to that?

“I have nooooo idea,” Terrance says.

It’s not hard to imagine LeBron responding the way most people do when they meet Terrance. “They ask me to say it. Some of them take pictures with me,” Terrance says. “Or they say, ‘Um, you’re that LeBron James kid?’ And when I say yes, they get happy.”