LeBron: Nothing to Worry About, Yet 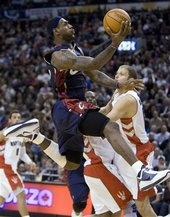 The Cleveland Cavaliers are off to an unsightly 0-2 to start the young season. For a team with such wildly high expectations, this is understandably a cause for concern. Some are even ready to push the panic button.

According to the team’s leader, though, there’s no need for worry this early on. Yes, the Cavs are struggling, but LeBron James — who recorded his first triple double of the year in the loss to the Raptors last night — isn’t worried.

The Toronto Sun has the quotes:

“Patience is what it’s all about,” James said. “Early in my career I would get very upset if we lost two or three games in a row. You feel like you can’t turn it around, but I’m at a point in my career where I know that you can lose but at the same time you don’t look too far into it.

“You learn from your mistakes and get better. You can’t keep making the same mistakes, that’s when I get a little frustrated, but I don’t think we have done that. We just have to get better. It’s an adjustment period for all of us. I’m still positive,”‘ James said.

James is right, of course. The Cavs have plenty of time to work through the challenges they’re facing, challenges that aren’t insignificant — from Delonte West’s personal issues, Mike Brown is still the coach, to the incorporation of Shaquille O’Neal into their offensive and defensive schemes.

Of course, if the team doesn’t figure things out soon, LeBron might begin to adopt a different tone. That’s when the time for worrying will come.