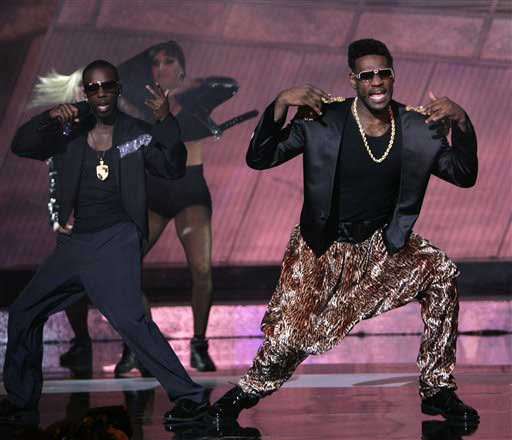 -I’m sure Lang will have plenty to say about these ridiculous photos of The King. (Full fashion roundup here.)

In the mean time, feel free to beat him to the punch in the comments.

(You know what this means, right? We’ll all have to tune in to the ESPYs on Sunday night to witness the LeBron madness. Ugh.)

-The Mikki Moore situation in Jersey is a bit tricky. Pay the man!

-The latest on Lonny Baxter.

Lonny Baxter, a former University of Maryland basketball star who last year was sentenced to two months in jail for firing a weapon near the White House, was charged yesterday with another firearms offense.

Baxter, 28, of Rockville, used FedEx to illegally mail three pistols and a Bushmaster rifle last July, according to a criminal information document filed in U.S. District Court in Greenbelt.

(Stay away from the guns, Lonny.)

-Wizards second round pick Dominic McGuire has what the Warriors’ Aaron Miles calls “that gangsta game”. I have no idea what that means, but I’m intrigued.

Karl is perfect for the triangle offense. He can pass and make open shots, and he knows how to space the floor. He did all three things in a 98-95 overtime loss to Philadelphia as he finished with 23 points on 8-for-13 shooting.

(Coby is also a cancer survivor.)