Legend of the Ball 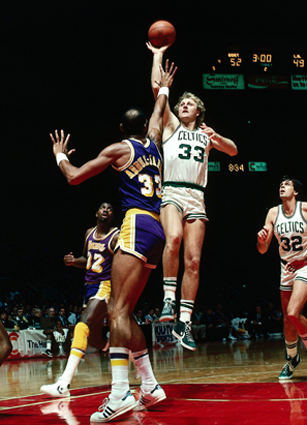 The Legend of Larry Bird is so great that it’s easy to lose sight of the basketball player who helped revitalize the NBA while starring for the Celtics from 1979 to ’92. The NBA was at a low point, a distinctly minor major sport, when Bird and his doppelganger Magic Johnson came to the League after squaring off for the NCAA title in a hugely hyped and widely watched game. Bird and Magic immediately brightened the fortunes of professional hoops, revitalizing two of the NBA’s most storied franchises. In the years to come, Bird’s Celtics won three titles (’81, ’84, ’86) while Magic’s Lakers won five, in a gripping decade-long rivalry that captivated millions of old and new fans.

As a white man playing in the whitest of major American cities and starring in a game increasingly dominated by black men, Bird became a great white hope. Some thought he could do no wrong; others were sure that he could do no right. Many saw a symbol instead of a man and they viewed him on the court through this prism. And that is a shame, because it obscures the cold, hard facts of how great Bird was and how much fun it was to watch him play.

The remarkable numbers begin to tell the story: three consecutive MVPs, two-time Finals MVP, nine straight All-NBA first teams, career averages of 24.3 ppg, 10 rpg and 6.3 apg. But they are just the outline. Bird played with supreme confidence and his own kind of definitive, endless grace. He could control a game in every possible way—scoring, passing, rebounding or defending. Bird could score inside or out, break your will with a rebound in traffic, a thread-the-needle pass or an eyes-closed three pointer. And he played with a manic intensity and endless hustle. You couldn’t take your eyes off him.

Teamed in Boston with Kevin McHale and Robert Parish, Bird helped form one of the best frontlines ever. They peaked in ’85-86, going 67-15, including a 40-1 home record. They rampaged through the Playoffs that spring, going 15-3. Bird bagged a triple-double (29 points, 11 rebounds, 12 assists) in the Game 6 clincher against the Houston Rockets to win his third NBA Championship.

Bird was just 30 but he had a lot of mileage. He never won a fourth ring, but he was far from done. He averaged a career-high 29.9 points in ’87-88, and became the first Celtic to record a 40-20 game, with a 42-point, 20-rebound performance. The next year he had surgery to remove bone spurs in both heels and only played six games. He returned for 1989-90, averaging 24.3 ppg, but then his back began giving him problems. He played just 60 games in ’90-91 and 40 the following season after an operation failed to stop the pain from a swollen disc.

As co-captain of the original Dream Team in ’92, Bird helped the US win gold in Barcelona. A few weeks later, he retired. Having coached the Indiana Pacers to the NBA Finals in 2000, the 51-year-old Bird is now the team president. But when we got him on the phone, the convo stuck to the glory days.

SLAM: When did it first strike you that you had an opportunity to be really good at basketball?

BIRD: Not until I got to the pros.

BIRD: I really didn’t. I have always been confident in my skills and once the game got going I knew I was probably the best player on the floor most of the time whether it was junior high, high school or college. I knew I had control of the game. But I still didn’t know what it meant because I went to such a small high school and college.

SLAM: You started school at Indiana under Bob Knight and left in less than a month. Did you have a problem adjusting socially, academically or basketball-wise?

BIRD: It was all money. My parents couldn’t afford it. I had a free ride scholarship but I had no money for anything else, nothing to live on. My folks couldn’t give me any money at all, so I left after three or four weeks. It was tough. I went back to French Lick. I worked at a company that built motor homes and worked at a boys club and then for the town. I did that for a year and then went to Indiana State.

SLAM:  You won three rings in the NBA—was any one of them more memorable than the others?

BIRD: They all were memorable. Our ’86 team was probably the best and we knew it could be that from training camp on. But I don’t really remember the wins. I remember the losses. That’s what I carry with me. I always expected to win. I can remember ’87, when we lost to the Lakers in six after McHale got hurt. If he stayed healthy, maybe we win. We got beat in ’85 by them when we lost a home game we should have won. Them games stick out more than any of the wins. They stick in the gut.

SLAM: You once called the late Dennis Johnson your greatest teammate. Why did you like playing with him so much?

BIRD: I called him one of my greatest teammates, and it was because DJ was just special, a two guard who could get the ball up the court, hit a shot or find an open man and defend anyone. But what really elevated him was the fact that in big games, he was always the guy who had the ball in his hand while also guarding their best player. During the regular season he always did well but in the Playoffs he stepped it up and the bigger the game, the more ready he was to go. I really respected that. Me and DJ had a bond. I sort of knew what he was thinking and I just loved playing with him from the moment he arrived in Boston [in ’83].

SLAM: One of the great examples of your chemistry was when you broke the hearts of every Pistons fan and Celtics hater in the world, stealing the ball from Isiah Thomas and passing to DJ for the winning layup in Game 5 of the ’87 Eastern Finals, just when you seemed about to pass the torch to Detroit.

BIRD: [Laughs] It was just a reaction play. Them things happen so fast that you don’t have time to think it out. I was getting ready to go foul Laimbeer because they had the ball and were up by one with five seconds left. When I took off over there, I was heading for Laimbeer and the ball was floating in the air and I just went for it and I knew DJ would be coming for it. I didn’t even look for him. I was always a reaction player. When I made passes to get out of the double team, it was gone before I thought about it. Tip passes off of rebounds, hitting the lane for a steal—things like that just happen. You don’t see it and think, “I need to do this.”

SLAM: You had tremendous rivalries with the Sixers, Lakers and Pistons, and each team had continuity from year to year, with the same core players. Do you gain a lot by keeping a core together for a long time?

BIRD: There’s no question about it. You build a commitment to each other and an understanding and new guys coming in to fill roles pick up on it and find their places more easily. Also, the more you win, the better you’re gonna get. It grows on itself. We played together really well and had great ball movement and that’s the kind of stuff that gets easier and easier with familiarity. I played with McHale and Parish for 11-12 years, DJ for 6-7. Our core group was very stable for a long time. We were pretty close in the sense of really knowing each other on the court and having close basketball relationships.

SLAM: Did that transfer off the court?

BIRD: As far as being professional, yeah, but going out to eat all the time, no. It wasn’t like that and it doesn’t have to be for a team to be close. That’s a misunderstanding. I remember one time Robert saying, “When my career’s over, I don’t want to see any of you guys ever again.” We spent a full nine months together pretty intensely every year.