Let’s all welcome Boston’s newest No. 5… 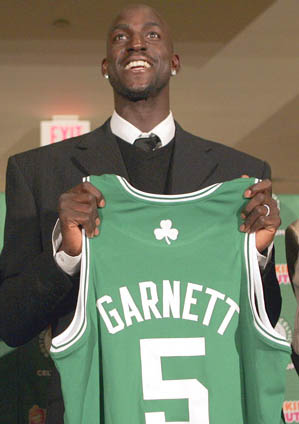 So Kevin Garnett has chosen his new number to wear on his new team, and apparently it’s No. 5. Courtesy of NBA.com Stats Central, here is a list (in historical order, even) of every player who’s worn No. 5 for the Boston Celtics. (It’s worth noting, perhaps, that ESPN.com’s Marc Stein called this number choice, based on KG being picked 5th overall in the ’95 Draft. I’d link to it, but I think it’s one of those Insider thingies. Oh yeah, I thought KG would pick No. 12. Oh well.) Anyway, here’s the all-time Celtic No. 5s:

Looking at that altogether undistinguished list (apologies to Bill Walton—and maybe Ron Mercer because I’m scared of him at the moment), it seems apparent that—without playing a game or even practicing with the team—KG is already the best No. 5 in the history of the Boston Celtics. They may as well retire the number for him now (along with Pierce’s No. 34 and maybe even Ainge’s 44 if this whole thing works out). I have high hopes that, within my lifetime, the Celtics will run out of single- and double-digit numbers, and will be forced to start wearing numbers with decimal points, triple digits and possibly even negative numbers. In fact, I’d love to see Big Baby kick things off by going straight for triple digits (wear your weight!).

I was going to look stuff up on some of the other 5s, but I looked up Skip Whittaker and found this, and all of a sudden I’m not all that interested in pursuing those guys anymore. (Although shockingly there’s someone out there who still cares about Jerome Moiso.)