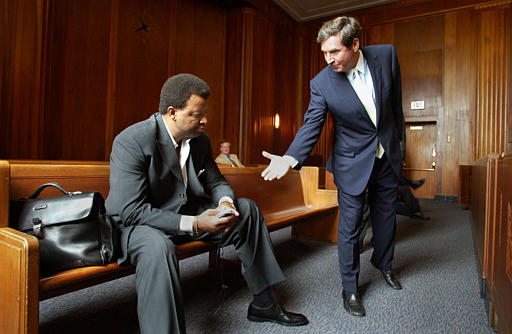 QUOTES OF THE DAY
“Every day if I told you to do something different at the newspaper or TV station, how would it work out for you? He made the decisions he made. Our record showed. This year we’ll have more consistency.” — Channing Frye, on Larry Brown.

THE LINKS…
• During the NBA Finals, I found myself talking to a few of the Miami Heat’s younger guys, who were talking about what it was like playing for Pat Riley. One player told me that Riley always told them that the way to earn playing time was to defend hard in practice. So, one day in practice, this player was shutting down his man, really working hard on the defensive end. And Riles stopped practice to tell the player that he was defending too hard and messing up whatever they were working on on offense.

I thought of that story today while reading this story about the Knicks and their discomfort with Larry Brown. Hey, the young guys didn’t understand him. So what? The problem is that nobody understood him.

And if I’m a Knicks fan, this quote from Nate Robinson scares me a little bit: “At first he (Brown) was trying to take my joy [away] — don’t do this, don’t do that. At the same time I had people in my corner saying, ‘Don’t ever change who you are. You got here by being who you are. By being Nate Robinson.'” As Jerry Seinfeld would say, “Who are…these people?”

• Steve Belkin, the man who wants to own the Hawks and Thrashers so badly that he’s willing to alienate all the fans and hurt the team’s chances of being succesful, has filed another lawsuit today. Belkin, everyone in Atlanta and Hawks fans everywhere feels the same way about you that Billy Knight does…

• For all my talk about Phoenix not being able to sign anyone, there is this Stoudemire guy they’re hoping to get big things from. And did anyone know Amare was switching to number 1 for this season? Also, Amare bought a condo from Na’il Diggs.

• About halfway down in this story, Tyson Chandler says, “I’m never a person who will take shots at anybody unwarranted. I want to make it clear that in no way, shape or form am I pointing my finger at Scott for the way I played.” So what’s the headline of the story? “Chandler Takes a Parting Shot at Bulls’ Skiles.” Um, no he didn’t.

• Still nothing from LeBron. More on this later.

• If you saw a guy who looked like this on the street, you’d probably give him some loose change…not a four-year contract.

• I already like Grizzlies rookie Alexander Johnson, because here he’s wearing Air Alpha Force IIs, like Chris Mullin back in the day.

• Marco Killingsworth has signed with the Magic.

• Finally, the headline here is unintentionally awesome. Hey, I’d be standing there, too.