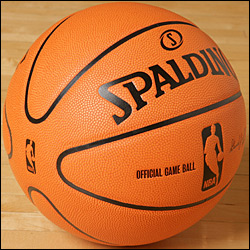 First of all, don’t try to watch summer league games on the Orlando Magic website if you have Firefox on a Mac, because it will crash your computer and lose whatever you’re working on. Aaahh! But they do allegedly have live summer league action on their site. Allegedly.

Anyway, I did want to say I’m glad that so many people are already getting all interactive and reading the site and posting their thoughts. Summer is usually the slowest time around here, so it’s great to see things this busy right now, while nothing much is happening in the NBA.

For those of you who mentioned being upset that the days of the old, one-long-column-a-day links are gone…well, they are. After writing that long column five days a week (well, most of the time) for the last five years, it’s time for things to change. If you don’t like it, sorry. I’m still going to try and write a big chunk of Links every day around 3:30 p.m., but I’ll augment it with more stuff throughout the day (and overnight, thanks to my insomnia).

QUOTES OF THE DAY
“Teams already have their scorers. They have their steak. They just need the mashed potatoes, the beans or asparagus to complement the meal. That’s what I am — the side dish — something to make the steak taste better.” — Darvin Ham.

“Just because you’re having fun and you’re enjoying what you’re doing does not mean you’re out of control. Hell, if I was 5-(7) and I could bounce it on the floor and dunk it, I’d try it, too. I’m glad he did it, and I hope he gets the opportunity to do it again.” — Isiah Thomas, on Nate Robinson. It’s more fun if you imagine him saying that last sentence like Samuel Jackson in A Time To Kill.

“When I first came in NBA, I got nothing. I was just a Korean high school player. Blazers gave me a chance, so I’m in the NBA right now. So think about it.” — Ha Seung Jin, on his NBA future with Portland.
“Soccer got a new ball, so it’s time we got a new ball.” — David Harrison, on the new NBA game balls by Spalding.

THE LINKS…
• Still no official word on Mike James picking a new team.
• He was never popular in Boston (understandably), but now Magic Johnson is back in Beantown to build urban housing.

• Could Al Harrington end up with Golden State? if the Hawks work a sign-and-trade for him, what do you want to bet Billy Knight doesn’t ask for rebounding machine and three-point shooter Troy Murphy and instead wants someone like Adonal Foyle?
• Alonzo Mourning says he hasn’t made up his mind about what he’s going to do next season. Whatever he decides to do, I’m pretty sure he’ll be salty about it.

• SUMMER LEAGUE WATCH: Andrea Bargnani celebrates the Azzuri winning the World Cup by picking up 10 fouls in his last summer league game. Would be cool if Colangelo signed Gattuso ….. Amare also picked up a ten spot ….. Dallas has a player named Bingo Merriex, who may or may not be an elaborate hologram created by Mark Cuban ….. Gerald Green needs to learn to score within the offense. And looking at the picture of his hand with the missing finger in the article, I think it’s pretty amazing he can palm the ball at all ….. The lone veteran on the Orlando Magic summer league roster? Darvin Ham, who rates his own mini-feature because of it …..

• A huge box of the new NBA game balls from Spalding showed up here yesterday, and we put them through their paces in the office. While they look radically different, they feel about the same — maybe the grip is a little better. The Pacers players also found the new balls rather uneventful.

• Chauncey Billups described Ben Wallace as “his hog,” then went off to play golf.

• Now that Larry Brown is gone, the Knicks beat writers can pretend they like Nate Robinson‘s showmanship. This story celebrates his appearance on the West 4th St. courts during the season last year, even saying the fans were climbing the fences to watch him play. Only problem is that’s not what it was like.

• John Canzano answers an interesting question: Has any athlete ever punched you out?

• Fun article on Ha Seung Jin, who describes everyone as his “man.”

• If Bryan Edwards makes the NBA, we might have a new official player of The Links.