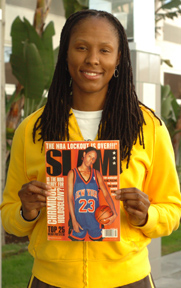 QUOTES OF THE DAY
“I never set out to be the guy on the billboards or the guy in the commercials. Through circumstances it came to be that way. I was proud to don a Memphis jersey and be that guy people could look to for a pulse of the Griz.” — Shane Battier, who has apparently been elected into the Hall of Fame or something.

“Josh, his greatest strength is he knows what he can and cannot do, and he stays within his realm. He runs the floor well, he goes to the boards, he catches the ball, he finishes fairly well. He gets who he is.” — Lawrence Frank, with a ringing psychological endorsement of Josh Boone.

• The WNBA All-Star Game is tonight. This is either a league on the cusp of expansive growth or a league on the way out. You make the call. I’ll have exhaustive coverage of this game tomorrow. No, really. (Also, catching up with Lynette Woodard.)

• SUMMER LEAGUE NOTES: Someone needs to find this on YouTube. I already took a look but found nothing ….. David Lee continues to impress, hoping this season increased production doesn’t lead to increased bench time ….. continues to Nate Robinson broke his nose and got into it with Daniel Gibson ….. The Nets rookies are dominating in summer league “against guys who will play in Iceland” ….. I like the note at the end here about Argentinian forward Walter Herrman who played one game with the BETcats then went on his honeymoon ….. The Jazz sent James Lang home from training camp due to “elevated blood pressure” …..

• The Nuggets have been trying to find a three-point shooter for years, and now they lose Greg Buckner.• Kwame is in the klear, and he comes out swinging. Does anyone really think Kwame has ever used the word “despicable” in conversation?

• The Sixers are looking to move John Salmons. If he was involved in a drug scandal, would the headline read “SMOKED SALMONS”?

• JJ Redick drops off the Olympic team and on the same day, Kirk Hinrich is added? Hmm…

• In other Duke news, Shane Battier cried while talking about being traded from Memphis.

• Good stuff on Mouhamed Saer Sene in Seattle, who was in school to become an auto mechanic before this whole NBA thing happened. One downer here: A vote of confidence from Bob Hill. That’s never a good thing.

• The more things change the more they stay the same: The Blazers are shopping Darius Miles.