Lighting It Up On Every Level 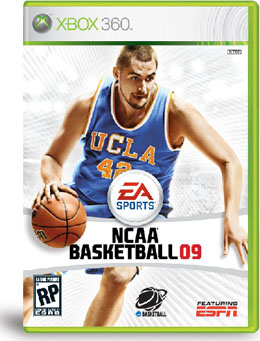 Kevin Love is a lightning rod in the basketball world. Everyone has an opinion on the 6-9 270-pound forward out of UCLA who was the fifth pick of this past spring’s draft. As part of a draft-day deal that sent him from Memphis to Minnesota, Love is an individual who really has little to prove and a discussion about him being the best college player in the nation last year is surely not out of the question.

Year, all the while being named to the First-Team All-American squad.

This past Thursday, Love was given another honor, when it was announced that his likeness would grace the cover of EA’s newly named, EA College Basketball ’09. Much has changed as this new edition of the game looks to add more “coach-like” features. Just after being a part of the announcement festivities, the 20-year-old took a few minutes to sit down with Cub Scouts to reflect on his dominate year in the college ranks.

SLAM: A trip to the Final Four in your first season. Was the excitement and energy everything you imagined March Madness would be?

Kevin Love: It was actually there (in San Antonio) that I learned what March Madness was all about. I had never even been to a game in the tournament growing up, so just being there. I felt like it was March Madness and anything could happen: the Texas A&M game, so that was a shock to me. It was probably one of the best games of the season for myself and also for our team, coming back with five, six minutes left, coming back from an eight to ten point deficit and winning the game. That was my fondest dream.

SLAM: PAC-10 Freshman of the Year and Player of the Year, First-team All-American, that’s a nice set of accomplishments. What was your proudest moment from last year?

KL: My proudest moment was what we did as a team. We sat there at our first team meeting, and Coach Howland said that we wanted to win the Pac-10 Tournament, we want to win the league outright, which, we both did. And we want to make it to the Final Four. So we reached all of our goals, the only thing we didn’t do was win the national championship. So I feel really good about our team and our goals and that’s what I take away from the season.

SLAM: Regardless of the legend you may ultimately leave in the NBA, I know it will be cool to always have this video game cover to commemorate your year in Westwood.

KL: Oh yeah. There’s really nothing better than to be on the cover of a video game, EA Sports College Basketball ’09. That’s really the icing on the cake from my whole year here at UCLA. When I look back, I can say ‘I did this, I did that.’ But individually as an accolade, being on the cover of a video game what I did in March Madness and where I have gone this far in my career, is just really special.

SLAM: As you now embark on making the ultimate jump from college to the pros, what was biggest difference between playing prep ball and your life last year in the Pac-10?

KL: Every night I was going against someone in the PAC-10 that was either 7-foot tall, 6-11 or 6-10. In high school, I faced some guys that were my height, but most of the guys were 6-5 or 6-6, nobody was up to my size, so I always felt like the big man out there. I had to learn different moves to incorporate more into my game that made me ready for the PAC-10. And now I am doing the same thing as far as the NBA game goes. It was definitely a big adjustment for me. Playing against players like the Lopez twins (fellow first-rounder picks, Brooke and Robin from Stanford) really made me adjust a little part of my game.

SLAM: With that in mind, who were some of the guys that you really looked forward to playing against?

KL: Definitely, the Lopez twins, because Stanford was our big rival, other than USC. I always looked forward to playing against the twins, Jon Brockman (Washington) Marty Luenen (Oregon), Baynes out of Washington State, Ryan Anderson and Devon Hardin from Cal. Of course, everyone from USC, because they were our main rival and then (David) Pendergraft and Jordan Hill out of Arizona State and Arizona.

SLAM: Can you describe that feeling when you ran out onto the Pauley Pavilion floor for the first time?

KL: I was nervous as hell. Running out there, I didn’t know what to expect. I knew I was going to have the pregame jitters, I just didn’t know it was going to be that bad. So we’ll have to see how it goes this upcoming year playing at the Target Center in Minnesota. But at the end of the first game, I ended up having what, like 22 and 13? So I had a pretty good first game, shot a couple air-balls that game just because of the jitters (Love’s only misses on a 6-8 night) but after that it was pretty much smooth sailing. I never really felt like I hit that “freshmen year wall,” either.

SLAM: That was where I was going next, as I roll down your box scores or recollect on the 15 or so games I saw you play last year, there was never any one game that made me say “wow,” it was just every night you were there, putting up 20 and 10. I do remember a big game in a win at Arizona and another one in the tourney against I think Western Kentucky, but what was your greatest game last year?

KL: I think my greatest game was…There were probably two games, one in the regular season was against Oregon, at Oregon. There was so much controversy with the fans, with everything they were saying, and being in a hostile environment (MacArthur Court is probably the toughest place to play in the nation, especially when everyone there is spitting hatred-filled venom directly at you and your family) and then having to come back from I think a seven-point deficit with four minutes left. After we got that one out of the way, we executed down the stretch and “took it to the house” for Coach Howland and we celebrated in the locker room, because that was a big win for us. Plus, we were missing Lorenzo Mata and Luc Mbah a Moute.

In the tournament, the biggest game for me was Texas A&M, another game where we had to come back and I think I ended up with like 21 and…no…I don’t know what it was. All I know was that it was a double-double plus seven blocks. I felt like I took over that game and it was a big game for me and for our team.

SLAM: As you get ready to change your life completely becoming a pro player, what do you think you will miss most about the college game?

KL: Miss most? Everything. Everything in college was good. It was by far the best year of my life and I got to meet so many great people here. But the one thing I will miss most is just traveling with my team. I’ll be missing the coaching staff and Coach Howland. But also, the teammates and the chemistry that we had on the floor. To get to play with Russell Westbrook, who was my roommate on every trip, Darren Collison, Luc, and I also made great friends with the guy who was the same position as me; there was never any bad blood there with Lorenzo Mata. All the guys down the line, they were all good guys. Nobody had any hidden agendas or big heads on their shoulders.