Links: About That Joe Johnson Contract… 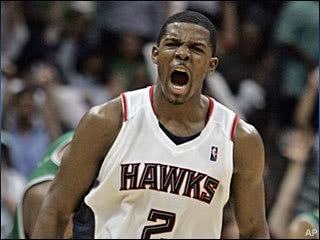 In some ways, the Joe Johnson free agency was a lose-lose situation for the Atlanta Hawks. If the Hawks bid somewhere lower than the max and lost Joe, the chorus of “The Hawks are afraid to spend money” would have rang out. And if the Hawks *had* bid lower than the max, they probably would not have re-signed Joe. As it turned out, the Hawks decided not to be cheap, and when free agency began they aggressively offered the most money possible to Joe, who happily agreed to take that money.

1) Spend whatever it takes to keep Joe Johnson

In the NBA, there’s no such thing as wrong or right. Instead there are levels of correctness, shades of gray. And what the Joe Johnson max contract comes down to is this: The Atlanta Hawks overpaid for Joe Johnson. Probably. Maybe. Or maybe not. Hey, it’s easy to look at $120 million being wired into the account of a guy who got knocked out in the second round of the Playoffs and say he’s not worthy. But Wade, Bosh, LeBron…none of them went any further than Joe in the Playoffs this season, did they?

A lot of people are predicting Joe to have a precipitous decline before this contract is over, and maybe he will fall apart. He is already 29 years old after all — six months older than Dwyane Wade, BTW. Then again, maybe Joe won’t break down. Talk about it all you want, but we just don’t know. Still, there’s a chorus of fans protesting not only the finances of Joe’s contract but also the length, because they’re afraid of where this could leave the Hawks somewhere down the road, in maybe 2014 or 2015. If Joe’s skills fall off a cliff or he suffers a debilitating injury, will the Hawks be stuck with a terrible contract that leaves them unable to move Joe and trapped behind a boulder of luxury tax space that makes them incapable of rebuilding?

I’ve often said there’s no such thing as a bad contract in the NBA. Guys with huge or “untradeable” contracts get traded all the time. Like Shaq or Vince Carter or Jason Richardson or Antawn Jamison. They’ve all been traded despite having contracts that got their teams pilloried at the time. Hell, Shaq and his massive deal got traded twice. It’s all about finding a fit and meeting a need and pulling the trigger at the right time. That time will eventually come for Joe Johnson, and it will be up to the Hawks not to miss it.

If the Hawks had lost Joe, they probably would have had to shift Jamal Crawford into the starting line-up. I know he had a great season last year as a sixth man, but considering Jamal Crawford had never posted a Playoff appearance in his previous nine NBA seasons, he clearly seems better positioned as a sixth man. Maybe they could have signed someone else to take Joe’s place, but they’d have been limited by about half under the luxury tax on money they could spend from what they lavished on Joe. And there was no guarantee they’d even get anyone nearly as capable as Joe to fill that spot. Kevin Pelton wrote that there were 16 free agents likely to be more productive than Joe over the next three seasons. As it turned out, Ronnie Brewer was the only one in Atlanta’s price range available in free agency, and as much as I like Brewer, he is no Joe Johnson. (The oft-mentioned replacement possibility John Salmons, who is two years older than Joe, ended up getting about $8 million a year.)

If we’re searching for certainty, I know this much is true, and I think this is the key to making sense of Joe’s contract: If Mike Woodson was still the coach of the Atlanta Hawks, then the Hawks definitely overpaid for Joe Johnson. Despite winning 53 games this season, we saw how inflexible Woody’s offense was, and how Joe Johnson in particular seemed to repeatedly be a fly in the ointment. Time and again the ball would swing around to JJ and time would freeze, as Joe would patiently dribble in place, his teammates all watching Joe watch the shot clock dwindle, and usually the Hawks’ scoring percentages ticking down along with it. I still have a hard time blaming Joe for this, as Mike Woodson seemed to endorse and enable this plan. Joe was a willing participant in it, of course, and he was actually pretty good at going one-on-one against above-average defenders. It worked, for a few years, to a degree. And then it didn’t.

Enter Larry Drew, who told me a few weeks ago, “Offensively, a lot of people are seeing the same thing. When you have five guys out there playing together, five guys out there moving the basketball, and five guys out there who are a threat, you become a much more potent team, and that’s something that I’m definitely planning on implementing, so we can have all guys out on the floor being a threat.”

So Larry Drew, a much-coveted assistant coach who Hawks players have told me they respect and who is currently the lowest-paid coach in the NBA, says the Hawks are not going to play Iso-Joe any longer. Maybe Joe will embrace the new offense, save himself some wear and tear and be able to score more efficiently for the next four-five years.

The Miami Heat are spending about $40 million next season on two players who they feel will significantly alter the way their team plays.

Maybe the Hawks paid Joe Johnson too much money. But in overpaying for Joe Johnson and underpaying for Larry Drew, the Hawks seem to be betting that they can achieve results that are just as profound at nearly half the price.

Now we sit back and see what happens.