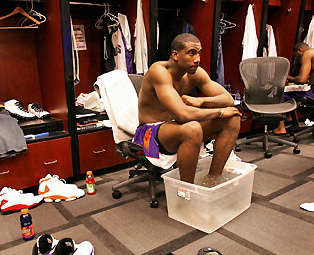 We’re in the midst of a heckuva week around here. We just finished SLAM 111, there’s all kinds of Draft festivities going down in and around NYC all week, and then there’s this Draft thing tomorrow night. And man are the rumors flying about that. Lots to get to today…

• About this KG trade stuff…

I’m not sure what the true story is here. Someone in the know just emailed me that the Minnesota/Phoenix talks are “total bullsh*t,” though I’ve also heard that there is substance there. I also just spoke to someone who told me it’s close to happening but that Minnesota will probably “get cold feet.”

Good grief I hope not.

Why would the Suns move Amare? I spoke with someone connected in Phoenix yesterday and they explained it this way: Phoenix looks at their window to win a title as the length of Steve Nash’s career. So they want to win it all in the next three or four seasons. When Nash goes, they’re going to have to rebuild anyway, so keeping Amare long-term isn’t all that important to them.

Now, why would you rather have KG than Amare? I was told that Amare isn’t always plugged in on the floor — he might miss a pick here or a roll there. KG would not miss those things. So it’s a matter of becoming a more technically sound team.

Would Amare’s inconsistency matter in Atlanta? Not a bit. Stick him on the Hawks, find a healthy point guard somewhere and you’re looking at an Eastern Conference contender.

Of course, I’m terrified that it’s not going to happen. Please happen. Come on, McHale, you can do it!

• At the behest of our managing editor Susan Price, I want to urge everyone to hurry up and fill out the Kicks Reader Poll so we can get your data in there. We’re starting to work on our special Kicks issue right now, so get on board.

Also, don’t forget about the charity in New Orleans we’re working with. Give until it hurts, people.

• Sam covered it here, but last night we went to the sneak preview of NBA Live 08. Gilbert Arenas and Kevin Durant were in the house. It’s about 200 degrees here in NYC this week, and that restaurant we were in must have been about 85 degrees, but Gil was wearing a sweater and jeans and he never broke a sweat. Really impressive performance from Gil. I got a chance to catch up with Kevin, who I hadn’t seen since the SLAM cover shoot and interview, and he looked happy to speak to me and to not have to be doing an interview for five minutes.

• It was cool to finally meet Dan Steinberg from the DC Sports Bog, though I had trouble recognizing him without his Drudge-esque fedora. I probably should have recognized Dan from his appearances on TV’s “The Blog Show,” but as I explained to Dan, I don’t watch or support “The Blog Show” because they never mention SLAMonline or The Links.

Dan said that I don’t write a blog.

I argued that The Links is a blog. I mean, it’s basically a web log of my activity, I update it irregularly, I use WordPress software to write it…doesn’t that qualify it as a blog? What is a blog? When I started writing The Links back in 2001, I wrote a daily column about sports with links to various news stories and my take on those stories. A few years later, someone invented the word “blog.”

Not sure why, but people don’t seem to think of me (or Sam, for that matter) as a “blogger.” It might be because I get paid to write, it might be because I also write a bunch of stuff for the magazine and SI.com. But whenever you see lists of the best NBA sites or blogs or whatever, people don’t seem to know what to make of us over here at little ol’ SLAMonline. Which is fine. We just keep cranking out the content. I know there are other sites that post hundreds of things every day, but I prefer quality over quantity. Which I think we have plenty of.

I consider “The Links” my blog. I wrote a lot of content from San Antonio and Cleveland. I posted at irregular times. I did reporting. And I was friggin’ irreverent! Was I blogging? Was I writing? Not sure. Although when Steinberg asked what software we use and I said WordPress, he seemed really impressed. So maybe I’m considered a blogger now. I don’t know.

• Anyway…been crazy busy today, doing radio and TV shows and calling around to see what’s the deal with this Amare stuff. If I hear anything later on I’ll update later, maybe even after midnight, so stay tuned…