Links: And They Say The NBA Has Problems? 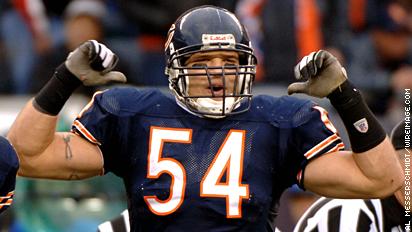 Lots to get at today. I’m out tomorrow and Friday, back on Monday. So be nice to Marcel as he keeps the news and rumors flowing.

• Bears linebacker Brian Urlacher allegedly sent the following text messages to his ex-girlfriend. If he actually sent these messages, his texting ability — just his pure talent at pushing a lot of buttons with what are surely big, football player fingers — is to be commented. His tact, not so much. His lawyer says it’s all crap. Either way, it’s entertaining.

• Back to the NBA, where there are strange things happening in Atlanta. According to Sekou Smith, the Hawks allowed two of their assistant coaches to interview for new jobs elsewhere, then, after the assistants were actually offered jobs by different NBA teams, the Hawks refused to allow them out of their contracts. One of the coaches involved is Larry Drew, who was Byron Scott’s highly regarded lead assistant in Jersey a few years ago and was being recruited by Reggie Theus to be his lead assistant in Sacto. Also, Drew’s son, Larry Drew Jr., is a senior in high school in Cali and a top-ranked point guard. This would’ve allowed Drew the chance to be closer to his family, in time for his son’s senior year.

But no. As Hawks GM Billy Knight said…

We should note that “normal practice” around the NBA also involves teams having point guards and centers, but that hasn’t stopped Billy yet.

There’s something going on here that’s not being fully explained. I’ve heard speculation that the Hawks, with their hands essentially tied with the pending ownership court case, wouldn’t be allowed to hire new coaches if these guys left. I’ve also heard the Hawks were afraid they wouldn’t be able to replace these coaches because other assistants wouldn’t want to work in Atlanta. (That one is bunk, because what assistant coach wouldn’t want to come be a top assistant under a head coach that’s likely to be fired?)

I understand that these coaches are under contract and should be expected to work under the terms they agreed to and signed their names to, but there should be logic involved. And it doesn’t seem like Billy Knight is using any logic. If this is because of the court stuff, let us know, BK.

• Lots of summer league coverage around the internets right now. I understand the interest, because there’s not much else happening in the NBA world this month. But please keep in mind, this is the kind of action that doesn’t really count.

When Greg Oden struggled early, everyone brought up the story of how Tim Duncan also struggled during his first summer league appearance. I actually asked Duncan about that last summer, and he said…

ME: I heard before your rookie season you played summer league and Ostertag killed you in a game. They were talking about how some guys come out of college and it takes them time to adjust.

TIM: He threw my sh*t into the first and second row a couple of times. Jermaine (O’Neal) destroyed me. He was with Portland, was real young…

ME: But he’d already been in the League for a while?

TIM: Yeah, he destroyed me, and Tag threw my stuff into the first couple of rows a few times.

ME: It takes you time to adjust to the speed, or what?

• I hope someone at GQ or Esquire is already working on a Dmitri Young feature. Also, Tony LaRussa should be sued by the fans of all the National League clubs for ruining any NL team’s chance at home field advantage in the World Series.

• One think about the whole Utah/Derek Fisher situation: I heard a lot of people talking about how nice it was that the Jazz just allowed Derek Fisher out of his contract so he could sign with a different team and move elsewhere to better take care of his daughter’s illness. And it was nice of the Jazz to just let him walk. But don’t forget, the Jazz owed Fisher a lot of money over the next few years thanks to that huge contract the Warriors and Chris Mullin originally inked with Fisher, plus the Jazz needed to upgrade at the two guard spot. This move suddenly gives them a lot of flexibility.

• Was walking to work this morning and I passed a guy wearing one of those fake throwback jerseys. This one was a Celtics jersey, number 44. Took me about three seconds to remember who it was…Fingers Ainge!

• I love the Trailblazers. For all the talk about their renaissance, about the way they’re rebuilding, they still do a lot of not-so-smart things. Recently they traded Zach Randolph for pretty much nothing in return, which was a horrible move considering a lot of teams would’ve given you more than just Channing Frye for a 20-10 guy.

Today’s report is that they’re buying out Steve Francis. That is actually a wise thing. What I don’t get is that Francis was owed $33.6 million, and the Blazers are supposedly going to buy him out by paying him “more than $30 million.”

That’s not buying him out, that’s just paying his contract. If I’m Portland, I go to his agent and say, “Look, we’ll pay you half of the contract and you get him out of here and let him play somewhere. Otherwise, we’ll keep him under contract for three seasons. Make him practice every day and sit on the bench every game, and we’re never going to play him. Ever. And when his contract is about to run out we’ll tell every team in the League that he can’t play. But we’ll expect him to completely honor the terms of his deal. It’s your choice.” (That’s probably not allowable under the Collective Bargaining Agreement, but who says it has to be an on the record conversation?)
Don’t you think Francis would have to accept that? Basketball players hate nothing more than having to sit on the bench night after night after night. And with Francis’ window closing, I’m pretty sure he wouldn’t want to spend his next three years in Portland on the bench.