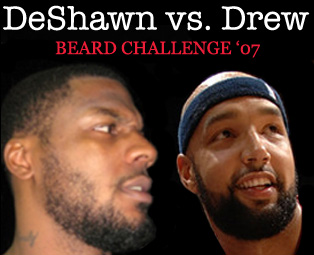 So I got an email tonight from Dan Steinberg, one of my main men over at the Washington Post. Dan sent along a link to

this post over at his DC Sports Bog, detailing the latest trick up Drew Gooden’s sleeve: A Beard-Growing Championship.

After prattling on about Gilbert being injured or scoring or being wacky or something, blah blah blah, DeShawn Stevenson was asked about his unusually full beard. Reports the Sports Bog…

Yes, that’s right, our very own DeShawn has made what we’re calling an “undisclosed wager” with the formerly ducktailed Cavs forward Gooden, who began growing his own beard over the summer. Both guys live in Orlando, and they saw each other socially. Gooden had a beard, Stevenson made a comment, and so Gooden challenged him to grow facial hair of his own.

“So I said all right,” Stevenson said. “He said ‘who cuts it first,’ I said let’s do it,” and the rest was history.

Two months later, all is going according to plan. DeShawn says the beard doesn’t itch, and he’s allowed to edge it up to keep from looking “all nasty,” as Wiz beat writer Ivan Carter put it. There was some concern in the locker room that the beard might be a bad-luck charm, what with that 0-5 start and all; Gilbert Arenas kept asking Stevenson to shave it off. But I’d disagree; I’d argue that a long and stringy beard will bring power, and accuracy too; Tolstoy was killer from three-point range. I asked DeShawn what he thought he’d look like in March.

“Probably look like Teen Wolf,” he said one time. “Probably Moses,” he said another time. “Moses with an even cut.”

Also in his post, Dan references my Knicks game notes from the other night, when I wrote…

• Just got an email from Drew Gooden. I’d emailed him the other night at Russ’s behest to tell Drew that with his luxurious neck beard he looks like Abraham Lincoln. Drew’s response…
“LOL! U know I always got something up my sleeve!”
Also on your neck, Drew.

In his email alerting me to this bubbling rivalry, Dan urged me to “get some comments from your boy.”

Well, I’ve got your comment. When asked who he believed will win Beard Challenge ’07, Gooden showed no hesitation…

“Hopefully me! Its a pretty large wager and I don’t want to lose. I already lost to him in a High School State Championship, but beat him in last year’s Playoffs. This one would put me ahead 2-1 when I win!”
D Good 90

I like Drew’s optimism and his commitment. Drew has previously proven that he possesses a staggering ability to flout societal norms in the pursuit of avant-gard hair stylings. Beard Challenge ’07 is no different than the legendary ducktail, except it’s on Drew’s face and stuff. He can do this in his sleep.

So, I’m riding with Gooden here, Dan. And Dan, I know you’re supposed to be all “impartial” or whatever, but it’s only natural for you to feel a draw toward DeShawn, who you already call “our very own.” Drew’s not a local guy for The Links, but he is our guy. Does this mean The Bog against The Links? Can we tie the future of our respective content to the facial hair flowing from the faces of these men? It’s like West Side Story, except with beards!

I’m going to keep checking in with Drew about this until we have a clear winner, and hopefully Agent Steinz can keep an eye on DeShawn’s peach fuzz.

(I’m also looking for beard-growing tips, so send those in and I’ll forward the best on to Drew. Also, if any of you bump into DeShawn Stevenson in the street, tell him his beard looks really bad and he should shave it.)