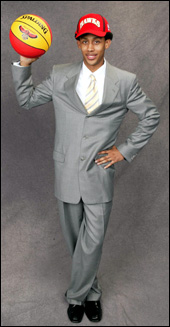 Breaking news from The A: Josh Childress is officially heading to Greece. I’ll have more later today…

11:02 a.m.: Have been trading emails with Josh this morning.

There will be a conference call later today, but for now Josh writes, “I’m excited about playing for Olympiacos this upcoming season. They are a great organization and Athens is a great city. It will be an adjustment, but I’m thrilled about this opportunity.”

According to reports, he’s going to make almost $7 million a season, tax-free. I spoke to a Hawks source this morning who pointed out that for Josh to net the same amount of money in the NBA, he’s have to get a (pre-tax) contract worth over $10 million a season. And there’s no way the Hawks (or any other team, except for maybe the Knicks) can pay their 6th man that much scratch. $10 mil a season is starter money. Josh just had to go to Greece to be a starter. It sucks for the Hawks, but I don’t blame them at all. Josh is a great player, but at some point the Hawks have to be responsible financially.