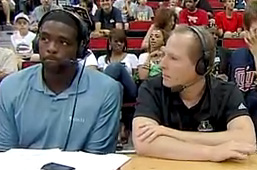 Last summer on the day after the NBA Draft, I spent a couple of minutes IMing with a writer friend about the Draft. I’d seen an interview with the new L-Wolves GM David Kahn during the Draft, and I just got a weird vibe from him. The person I was IMing with had known Kahn for a while, and this person spent was telling me that Kahn was not only the perfect person to be the GM of the L-Wolves, but also that he’d done a great job in the Draft, picking Rubio and Flynn back-to-back. Even though I didn’t understand those picks, I reserved the right to pass judgment because it would obviously take some time to figure out how to turn that franchise around.

I’d love to be able to upgrade them from L-Wolves to W-Wolves, but one year later, and the Wolves still deserve the L. It gives me no real pleasure to see them make so many strange moves and flounder about. It’s more fun to see franchises improve and become contenders, and maybe the Wolves will get there eventually, but for now the Wolves keep making weird draft picks, overpaying for guys and pulling off terrible trades.

Which brings us to last night. With the L-Wolves playing in the Vegas Summer League, Kahn sat in with Matt Winer and Chris Webber for a few minutes to talk about the future of the franchise and…well…the video is embedded here:

I was going to break this thing down but Kelly Dwyer beat me to it and killed it here. This interview is probably the highlight of Summer League thus far.

A few bits I particularly enjoyed were when they talked about Darko Milicic:

And then there’s this…

WEBBER: One thing that every guy who’s played this game knows is that it only takes one guy to believe in you and put you in a position for success, so… I’ll definitely be looking forward to watching his growth with you guys this year.
KAHN: Well, and I think your career is somewhat indicative. What year was it that you really felt like…kind of, felt like you were in your own. In the League.
WEBBER: Yeah. I’m…you know…I’m not really sure. But…(laughing) we’re not talking about me and Darko at the same time.

For what it’s worth, I’d assume Webber felt pretty confident in the League by the first game of his rookie season, when he started and went for 15 and 7, with 3 steals and 3 assists and 2 blocks.

• Unrelated to basketball but also worth checking is this story about an epic prank that was pulled on a writer over at the New York Post.

• This is also worth your while:

(Background on how it happened is here.)

• And don’t miss this great story by Marc Spears on Chris Washburn.

• Last Thursday night was one of the stranger nights of my basketball life. Of course there was “The Decision,” that odd, awkward hour of programming. If anything, I’m guessing whoever produced that show for ESPN has a lot more respect now for the people who produce finale shows for “Survivor” and “The Bachelor” and whatnot. It’s tough to make anything feel interesting for an hour on TV, much less a show based around one person making one announcement which takes all of three seconds.

And did you notice what Davis Stern said about the show earlier this week? “I think that the advice that he received on this was poor,” said Stern. “His performance was fine.  His honesty and his integrity shine through. But this decision was ill-conceived, badly produced and poorly executed.”

But how did you really feel, Mr. Stern?

I liveblogged the show for SLAMonline, and as soon as it ended I went on a couple of radio shows to talk about it. Mostly, I was just surprised that he was leaving. I thought he would stay, because I thought it would be impossible for him to leave his home behind. But sometimes you have to leave home to find yourself or find happiness. I get that. I was 25 years old when I left Atlanta, the city where I’d lived my entire life. It’s his life, his choice. I feel bad for Cavs fans, losing the best player their franchise has ever had, but I’m excited to see how all this is going to play out in Miami.

Anyway, by 11:00 PM last Thursday night I was ready to shut it down for the night, but I checked Twitter one last time and found out about Dan Gilbert’s letter, which really was just about the perfect bizarre ending to a bizarre evening. I still smile when I think about that letter being written in Comic Sans. And I definitely know who the fake Twitter account in the next SLAM will be.

Speaking of the next SLAM and what’s coming down the pipe, I should probably mention that earlier this week I turned in a massive round of edits on my book, which means it’s about 90-percent finished. I’m still not sure of the release date because the Braves won’t eliminate themselves from contention this season. So there’s a chance it’ll be out this fall, or next spring at the latest. And today we’re finishing up a special issue of SLAM that will be out in about a month, and then next week we get rolling on our annual KICKS issue. After that we crank out another SLAM.

Before we get to all that, though, I’m taking next week off and taking my talents somewhere with no internet access, no cell phone signal, no Twitter, no email, nothing. I’m unplugging so I can return charged up for the next few months.

And so I don’t leave you completely empty-handed…I got an email the other day from my man Sekou Smith, who allowed me to sit in with him and Micah Hart this week on the NBA.com Hangtime Podcast to talk about what we agreed was one of the strangest weeks in the history of the NBA. So here’s an hour of NBA talk, from the whole Bron/Cleveland situation, to what to expect from the Heat, to summer league action and the moves Phoenix has made, plus Derek Fisher re-signing with the Lake Show. (Also, I give my prediction for next year’s champs.)

It’s on itunes here, or NBA.com here, or here’s a direct link to the audio so you can download it or listen over your computer.

Catch you guys next week…