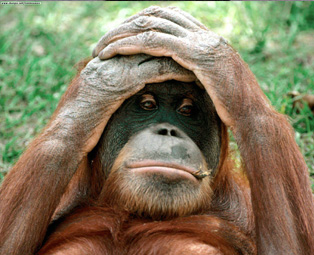 Someone asked me recently about The Links archive, particularly all the material from the old SLAMonline. It didn’t all exactly go away, but there’s no way for you guys to easily access it. So, I figured from time to time it might be fun to go back and re-run stuff that ran there over the last six years.

Today, my review of the Fox TV special “Man vs. Beast.” This post originally ran on Thursday, January 16, 2003.

Last night around 8:55 p.m., as I was getting my pen and pad ready for the greatest television broadcast of the night, if not the year, Wifey decided she couldn’t take it any more. I’ve been ranting and raving about this exciting “Man vs. Beast” television show for days, without really thinking about how she was into animal rights and that kind of stuff. And suddenly, she lost it.

I tried to write it all down, but I only got a few assorted phrases, including but not limited to “God’s creatures,” “treat with reverence and respect,” “common denominator ratings.” It ended with “I don’t care.” Unfortunately, she noticed me writing this stuff down, and she came over, took the pen from my hand, crossed out the paragraph, handed the pen back and went upstairs to watch her shows, that morbid stuff on A&E and Discovery that tend to be about death and murders and FBI profiling and stuff like that. I was going to point out the inherent irony, but thought it better to just let her go, what with “Man vs. Beast” starting and all.

The program finally began, with Michael Buffer bringing us the much-ballyhooed matchup between a Kodiak Bear and Kobayashi, the professional eating machine. Yesterday in The Links, reader Watson and I argued our various points about this potential match-up, and then Watson followed it up with a late-afternoon email to me, saying:
Lang,
I hate to beat a dead horse (that will be on Man vs. Beast 2) but I still have to go with the guy over the bear. He is a professional hot dog eater. He is trained and focused on eating hot dogs. Even though the bear can swallow them whole it is going to be hard to grab those slick little buggers with those big bear claws. I still bet on the guy, unless they starve the bear.
I wrote him back, pledging my support to the bear.

Just to make sure that we aren’t totally exploiting these animals, Fox begins teaching us about the beasts. Kodiak bears, for instance, are omnivorous, meaning they can eat anything. Perhaps that’s why they separate Kobayashi and the bear with electrical wire and two game wardens with stun rifles. We also are told that Kobayashi considers himself a “food fighter” and that he is the world’s “greatest professional eater,” raking in $400,000 in the last two years. I can’t get over how skinny the dude is. He must be world’s greatest professional vomiter, too. Meanwhile, the bear is 8-foot-1 and weighs 1,089 pounds. No way the bear loses this.

As the combatants settle into place, co-host Michael Buffer runs down the rules, pointing out that the bear and Kobayashi will be racing to see who can eat 50 “specially grilled” hot dogs the fastest. Specially grilled? Have I been cooking hot dogs wrong all these years?

It begins when the bears starts, using his paws to kind of swipe the dogs into his mouth. “No hands for the bear,” Buffer says, adding, “Unbelievable!” Kobayashi’s running a double team, pushing ’em in two at a time but not really going all that fast, mainly because he actually has to chew.

Two and a half minutes into it, it’s over. The bear finishes all 50 in 2:36, while the world’s greatest professional eater finishes just 31. Kobayashi says afterwards that he’s going to train so he can beat the bear. The tension is palpable in here.

We’re back to the show. Challenge number two is an orangutan in a tug of war against a sumo wrestler. We quickly discover that the orangutan has twelve times the strength of a human. They then tell us that the sumo wrestler weighs 360 pounds, which I think is kind of undersized for a sumo wrestler. Also, he speaks English fluently, like he’s from L.A. or something, which doesn’t help his cred in my book.

After tying the man and beast to their ropes, it begins slowly. Both contestants are lying down on their platforms, trying to avoid being pulled off the platform and into a muddy pool. While the wrestler is pulling and sweating and straining, the orangutan appears to be chilling, as SLAM associate editor Khalid Salaam had predicted earlier. Finally the sumo wrestler stands, and the orangutan immediately pulls him off and into a suspiciously perfect belly flop in the mud. Upon viewing the instant replay, I notice there’s a bunch of slack in the wrestler’s rope when he goes over the edge. Hmm…

Which brings me to a suggestion for “Man vs. Beast 2”: Next time, get celebs involved, or at least someone we’ve heard of before, so they’ll at least have a modicum of crediblity. Sure, maybe it’s just entertainment to you, but I’m really interested in this stuff. How about Refrigerator Perry against the orangutan?

Commercial. How can you not like “American Idol?” On the promo for “American Idol 2,” they show a young girl trying out for the judges, closing her eyes and singing her heart out, her voice shaking, obviously nervous. The camera cuts to judge Simon Cowell, who tells her, in his withering British accent, “I’m absolutely serious, you may be the worst singer in the world.”

We now go to an unidentified racetrack, where Carl Lewis joins us to announce two speed races. To begin with, we have a twelve-foot-tall giraffe against sprinter Shawn Crawford. Following this, Crawford will race a zebra. As Carl says, “Both animals bring something different to the table.” Like a steak and a filet?

I didn’t know that giraffes are especially fast or anything, but Carl tells us giraffes can top out around 35 miles an hour. As the giraffe loads into the starting gate, an official Olympic starter comes out with a pistol to start the race. I’m just waiting for him shoot the gun off and for the giraffe to immediately stomp on Crawford. I think that would count double for the beasts.

The race starts and Crawford jumps out to an early lead. The giraffe doesn’t appear to really care, sort of jogging down the track. I’ll be the first to admit that I don’t know a lot about giraffe racing, but at one point I think the giraffe is kicking it into high gear, before he immediately goes back into his easy gallop. Crawford cruises to the win.

Crawford catches his breath as his next opponent, a zebra, comes out. Since the zebra is closely related to the horse, I’m thinking the zebra will whip Crawford. Before they get going, a graphic comes on the screen with Carl’s “Keys to Victory.” For the zebra, it says, “Must realize it’s a race.” Wouldn’t that be great if before an NBA game on ESPN they show Bill Walton’s keys to victory, which say something like “Dallas must realize they’re supposed to try and win.”

The gate opens and the zebra shoots ahead, tearing up the track and winning pretty easily. Hold everything! Crawford immediately complains, saying the zebra jumped the start and demanding a rematch. Carl goes to the replay, and the zebra did indeed jump the gun. Lot of good the Olympic starter did.

They run it again, and this time the zebra’s trainer holds the beast back until Crawford is well out of the gate, and the zebra still easily overtakes Crawford, even throwing in a little celebratory leg kick as he crosses the finish line. We get a shot of an exhausted Crawford looking disgustedly at the zebra. I don’t know where Crawford is from, but I bet his friends back home are dying laughing right now.

More monkeys! This time it’s a nude chimpanzee, doing an obstacle course against 36-year-old Navy Seal Scott Helverton. The special analyst on this match is former Sergeant Major Dave Francisco, who actually has a pronounced lisp. That must have been hilarious when he was in the military, yelling at the troops: “You guysth are the sthorriest sthouldiers I’ve ever stheen!” Helverton talks some good trash, calling the chimp a “wannabe human.”

Throughout the build-up, I’m thinking the chimp must have this wrapped up. The race has monkey bars, for goodness sakes. That’s like having a crazy contest and inviting Ron Artest to participate.

As the shows goes to commercial, my dog, Starbury, runs up to me and decides she wants to play. I can’t do it right now, though, with a good ten minutes still left in the show. She playfully scratches and takes little bites at me, and I play back until the show comes back on. It’s Man vs. Beast, the home game.

We go into the final segment of the night with Man having a chance at tying this thing up. To close it out, we get 44 little people pulling a 230,000 pound airplane in a race against an African elephant. To reinforce that there’s no exploitation happening here, supposed animal expert Jules Sylvester shows something like an elephant highlight reel, explaining that elephants have been used to move heavy logs or boulders for centuries and adding that they are “nature’s bulldozer.” He didn’t say anything about them being used to pull 230,000 pound airplanes, though I guess that’s implied.

As the little people come sprinting excitedly onto the tarmac, I notice that there seem to be a lot of little women and old little people. When they assemble in their pulling formation, I notice that half of them are wearing blue jeans, which doesn’t seem to be the most effective thing to wear during a test of strength. I also think I saw one of the little people in the back row smoking a cigarette. Oh, and I think I saw Jeff Van Gundy two rows from the back.

The race begins, and it’s quickly evident that while all of the humans may be little people, they are not all motivated little people. Though some of them have looks of determination on their little faces, a good third of them appear to be walking normally. The elephant just plows straight ahead throughout, taking the race over down the stretch.

And what did we learn from this program?

When man goes up against beast, you get a baseball score.