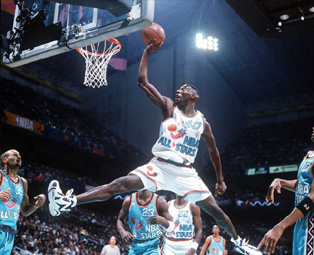 1989 — The number. Another summer. The Seattle Supersonics use the seventeenth pick in the first round of the NBA Draft to select a gangly 6’10” nineteen-year-old from Elkhart, Indiana, named Shawn Kemp.

Kemp, who had been dominant at Concord High School, became the first player in decades to go straight from high school to the pros.

SLAM: Would you still go pro so early, knowing what you know now?

KEMP: I think so. I knew what I was doing back then. I was in a situation where I had to consider the NBA. I could have gone to UNLV instead of going pro, and that was the year that LJ and Stacy Augmon and them won the championship. So, I had opportunities, but I elected to go ahead and challenge myself.

1992 — After just three years, Kemp has established himself as perhaps the league’s most exciting young player, known for vicious, high-flying dunks over anyone stupid enough to get in the way. He’s gone from being the Sonics’ twelfth man to starting power forward, averaging 15.5 points per game and 10.4 boards. He carries the Sonics into the second round of the playoffs, where they lose to the Utah Jazz in five games, after whipping Golden State (and Alton Lister) in four.

SLAM: Do you think the best dunk you ever did was the one you did in the Garden against the Knicks? That double-pump, sideways reverse? That was ill.

KEMP: Ahhh…(smiling brightly)…nope! Naw, man. The best one was probably…no doubt, man, it was on Alton Lister in the playoffs. I call it the Lister Blister.

SLAM: (laughing) You dunked him right out of the league.

KEMP: (laughs) I think that’s the best one.

1996 — After four straight All-Star appearances, Shawn Kemp and the Sonics are rolling. With Kemp dropping 19.6 and Gary Payton dishing out 7 dimes a game, the Sonics make the NBA Finals for the first time in 16 years, only to lose to the Bulls in six games.

Following the season, the Sonics go out and spend $35 million on center Jim McIlvaine, who had averaged 2.3 points and 2.9 rebounds per game the previous year.

KEMP: McIlvaine, that’s unfortunate. It’s unfortunate that some of these organizations don’t put enough research into seeing if a guy can really play ball or not. I have nothing against him. Once he came out there, we became pretty good friends. It’s just amazing that he was a guy that had already played in the NBA and didn’t get much time, and they gave him that much money.

SLAM: But it was still disrespecting you, right, since you were only making $2 milion a year and were the team leader?

KEMP: My deal was this: I was already under contract. I can actually understand why maybe a team that went to the championship would come back and say to me, ‘We don’t want to give you this money. We want to do something else to make us even better.’ I can understand that.

April, 1997 — Kemp and the Sonics are struggling, and it’s killing Kemp. Frustrated by financial issues, Kemp misses two practices and a team flight.

To make matters worse, NBC’s Peter Vescey reports during a national telecast that Kemp stood before his Seattle teammates in a closed team meeting and announced that he was “struggling with alcohol.” Though Kemp denies the report his teammates unanimously support him, the damage is done.

When asked to comment on the situation, Sonics president and general manager Wally Walker says he doesn’t “know enough to comment” on Vecsey’s report, and that he doesn’t “comment on personal issues” regarding his players.

SLAM: Toward the end of the ’96-’97 season, you were getting killed by the media.

KEMP: Oh, no doubt. A lot of it comes down to the organization. If they know they have to pay you a bunch of money, sometimes they won’t stick up as fast for you, especially if they know you’re going to hurt yourself in the long run, as far as your name or your game.

SLAM: And that’s what happened to you in Seattle?

KEMP: Yeah. And I was never mad at the media; I was mad at the organization for not sticking up for me. They’d known me since I was nineteen, and they knew I didn’t have a problem drinking. But they thought that maybe I was unhappy and wanted to leave, so they didn’t say anything when the reports came out.

SLAM: Did you ever admit to your teammates that you were struggling with alcohol?

KEMP: No. That’s ludicrous. I’ve never been in any situation like that. It was tough because if someone says something like that about you, it goes all over. Here I am, I’m turning on the TV, and there was Dr. J commenting about me, saying ‘I hope he’s all right.’ I was like, ‘Oh my God…’ But that’s part of the game, too. One thing I’ve been able to realize throughout my career is that sometimes you’ve got to take that smack on the chin, and keep going. It’s tough, but nobody ever told me it was going to be easy.

September 25, 1997 — After warring with Sonics’ management for a year, Shawn Kemp is traded to the Cleveland Cavaliers.

SLAM: Was there anything you didn’t accomplish, personally, in Seattle?

KEMP: I worked my butt off, and that’s all you can say in this world. You can’t go into your boss and say that you earned this amount, and that’s why I elected not to raise hell and go in and say I wanted a certain amount; I thought it was best for me and for them that I go. I didn’t even want to talk about the money, because if a team doesn’t come to you to talk about a certain amount of money, in all likelihood, that means they’re not going to give it to you anyways. I just wanted the team to come to me and say, ‘Hey, here’s what we want to do for you.’

May, 1998 — Kemp’s first season as a Cav goes smoothly, as the young team makes the playoffs with a 47-35 record. Kemp makes his sixth straight All-Star game, and finishes the season averaging 18 points and nine boards a night.

The Cavs take on the Pacers in the playoffs, and Kemp averages 27 points through the first three games. With the Pacers leading the series 2-1, Sports Illustrated releases a cover story about athletes having children out of wedlock, naming Kemp as a frequent father.

SLAM: When that article came out, you never really responded to it.

KEMP: No, I didn’t, because most of the stuff in the article wasn’t true. And it’s not fair to the kids I do have to hear me out there saying ‘This isn’t true.’ So I just let them take their shots at me, and I was still going to be responsible for my actions. I haven’t run from anything — never have, never will.

If you do some bad things, you have to pay the price. You can’t be mad or sad about it, that’s what you did. It’s not always easy, but sometimes you just have to be a man about it, because obviously you got yourself into that situation, and you just have to handle it.

SLAM: But you don’t have to handle it if you don’t get in the situation to begin with.

KEMP: Of course. There’s no doubt that I should have done some things differently, but at the same time, since that article came out, I’ve learned to see things very differently. When it first came out, I was upset. But, one week later, I was thanking God that the article came out, because I knew that I would never have another problem in my life. Nothing could ever bother me.

SLAM: You’d already been through hell.

1999 — Shawn Kemp returns from the NBA lock-down about 25 pounds heavier than he’d ever been. He eventually gets his weight down to 280, but the Cleveland media harps on his weight all season long, even though he finishes the season averaging a career-high 20.5 points.

Going into the current season, with new Cavs coach Randy Wittman going to a more up-tempo system, the Cleveland media stops talking about Kemp’s weight and instead focuses on his conditioning, saying he’s out of shape.

SLAM: How much DO you weigh? Sitting here looking at you, you don’t look overweight at all.

KEMP: (laughs) The only thing is I’m not dunking the ball the way that I used to. It’s not that I can’t dunk, but the NBA started giving out technicals, started suspending guys, and every time I’d go up to dunk I’d get a tech. And I just thought, man, do I care? The media was killing me, saying ‘All he can do is dunk. He doesn’t have a well-balanced game.’ Now I show that I have a well-balanced game, and they say ‘He can’t jump anymore. He must be overweight’

SLAM: Do you feel that you’re overweight or out of shape?

KEMP: Man, last year I had the best year I’d ever had. And this year I haven’t missed a game yet. I’ve played every pre-season game, and every game this season. If you’re out of shape, there’s no way you can play 82 games in the NBA and be out of shape.

But after this season, I may decide I want to drop ten pounds, twelve pounds, fifteen pounds, and go back and start handling the ball a little bit more. That would be my ideal plan. But I’ve got to wait and see what my big fella’s gonna do. I mean, after Zydrunas Ilgauskus, my next best big man is Mark Bryant, who has started more games this year than he has since he came into the league, and he’s been playing longer than I’ve been playing.

April 2, Y2K — Shawn Kemp is sitting next to me in the Gund Arena player’s lounge, painstakingly going over his career. The Cavs have been riddled by injuries, and will miss the playoffs for the second consecutive year.

As we talk, Kemp shows himself to be an honest, upfront guy, not afraid to talk about anything. And though I, too, had thought Kemp was played out, I realize that I was the one being played. Kemp is still putting up the numbers this season — averaging about 18 and 9 — and still taking the hits.

About an hour into our conversation, Kemp tells me about his plans for the future.

SLAM: (laughs) You’ll have played fifteen years in the NBA, and you’ll be…

SLAM: Man. You’ll have your whole life ahead of you.

KEMP: Exactly. That’s part of it. But also, you go play your butt off, then get out of the business when you can still walk, then you have fun and enjoy life. And it’s a challenge for me to get out of basketball and do something else eventually. But right now, the Reignman’s got to get back to work and change some things around, because I’ve taken too many lumps from the media. And the best way to fight back is on the court, and I know how to do that.

SLAM: OK, I’m going to ask you straight out: Yes or no, are you an alcoholic?

SLAM: Are you some kind of baby-making machine?

SLAM: Are you out of shape?

SLAM: What are you?