Links Classics: The Lord Of The Rings 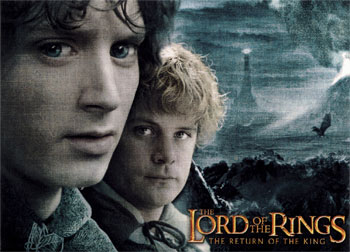 Someone asked me recently about The Links archive, particularly all the material from the old SLAMonline. It didn’t all exactly go away, but there’s no way for you guys to easily access it. So, I figured from time to time it might be fun to go back and re-run stuff that ran there over the last six years. Today, my review of the third Lord Of The Rings movie from a special preview screening Russ and I attended. This originally ran on Friday, December 12, 2003.

I missed most of the games tonight because I got an invite from our friends at EA Sports to go to a special advance screening of The Lord of the Rings: The Return of the King. Admittedly, I was probably a dubious choice to invite to this screening, seeing as how I never saw the second movie and only saw the first hour of the first movie. (Actually, I saw the first hour of the first movie twice, once on HBO and once when Wifey and I rented it; both times I fell asleep at the same point, when all the little guys were running around in the meadows and the fireworks were going off.) I rarely fall asleep during movies, only when I’m really not feeling it. And that movie, I just couldn’t get into.

My grandmother gave me a set of The Lord of the Rings books for Christmas one year when I was a kid. I liked to read back then just as much as I enjoy reading now. After we opened all the presents and ate the big meal, I settled down by the fireplace and cracked opened the box set. I got about forty pages in and couldn’t get involved. Over the next few years I tried it again and again and never could get very far — hobbits, elves, Middle Earth…I don’t know. I was more interested in the Atlanta Hawks.

When this movie series came out two years ago, I had no pressing need to run and see it, despite the rave reviews and the Garnett-like numbers it was putting up at the box office. I usually try and watch or listen to stuff that’s popular even though I may not be interested in it, just because I know that many of you guys are probably watching and I want to know what’s big out there. The Lord of The Rings, I missed.

Russ Bengtson, SLAM editor-in-chief, had seen the first two movies and liked them (though we both agreed that the Harry Potter books and movies were better). And so Russ and I went to this advance screening last night. We got to the theater about an hour early and found a line snaking around the corner, which moved along quickly and we got inside. The theater was maybe sixty percent full, so we were able to spread out and even leave an empty seat between us so that everyone else there would know we were straight.

You know how they have those pre-recorded music tracks/fake radio shows they play while you’re waiting for the movie to start? We had to sit through about thirty minutes of two horrible bands we’d never heard of, both of which made us laugh when we heard their names: “El Niño” and “Spineshank.” Luckily I’d brought along the new issue of 442 (the soccer magazine my man Nick Hornby once called “aspirationally glossy”), which I read in the half-light until the movie started. Predictably, just as OutKast’s “Hey Ya!” started playing — the first good song we’d heard since we’d been there — the music cut off and the movie started.

(WARNING: I may give away some secrets of the franchise here, though I’ll try my best not to, and I won’t tell you how it ends. Not exactly, anyway. But if you’re a fan you’ve probably read the book and you know what’s going to happen anyway, right? Also, I don’t know the terminology of the various people in the movie but I’ll try to get it right.)

The movie starts with a flashback from the first movie, where two dudes are fishing and one falls in the water and stumbles across a gold ring with some sort of writing around the outside. Presumably, all hell broke loose after that happened. From there we zip forward to this movie and we find a few hobbits smoking pipes and eating smoked bacon, sitting on a smoked out battlefield (I guess left over from the second movie?). One of them, named Pippen (I think it’s actually Pippin, but I’ll use the Scottie spelling), finds a giant enchanted bowling ball, which he promptly hands over to a huge albino wizard who resembles Professor Dumbledore from the Harry Potter franchise. Later on Pippen ends up holding the thing and has a vision that includes a tree. The other hobbits and some of the other guys run in there and knock it out of his hands, but not until after he’s had the vision. For reasons never made clear, this vision means Pippen and Dumbledore have to leave immediately. They hop on an albino horse and ride off, heading somewhere with a weird name that takes three days to get to.

They get there and we find out that it’s actually Vatican City they were heading for; at least, that’s what it looks like. Once inside the gates, they go see the head dude, who’s all angry about something or other. Dumbledore and Pippen talk to the head dude and want him to declare something similar to war, but he won’t. They end up going over his head and doing it on their own, and they don’t get in any trouble for it.

While all of this is going on, the precocious Elijah Wood and his buddy, Sam (a.k.a. Rudy, from the eponymous movie) are traveling over a mountainous range with Dobby the house elf. Elijah and Rudy are hobbits, which means they are short and have big, hairy feet. They also have whiskers on their face but never have to shave, and their whiskers never grow. Because they’re hobbits! Elijah has a ring on a chain around his neck, and this is apparently the source of much trouble. We know we’re supposed to be concerned about the ring because they show about eight million close-ups of it. And every time, it’s still just a ring.

All the guys in this ring group get paranoid and start thinking that everyone else wants the ring, and many dirty looks are shared. They end up outside the gates of what looks like the Emerald City from The Wizard of Oz, and a bunch of soldiers come marching out, exactly like in Oz — all that’s missing is the “Oh-wee-oh, OHHHH-ohh.” And the flying monkeys. Instead of monkeys, they have Pete’s Dragon zipping around overhead.

Oh, there’s also this part where the lead singer from Aerosmith’s daughter goes and visits Agent Smith from The Matrix, a masterstroke of cross-promotion.

All of this culminates in a huge rumble on a field outside Vatican City. Right before the fight, Pippen sings a song in a high voice. No, really. While everyone else is fighting, Elijah wood and Rudy are trying to climb a hill so they can throw the ring away, much like in The Gods Must Be Crazy.

There’s also a rip-off of Pirates of the Caribbean, with a horde of fighting ghosts. That’s all I’ll say about that.

The movie ends with yet another Wizard of Oz scene, with one of the hobbits in a bed and each of the characters triumphantly coming in one at a time, like the final scene in Oz.

Now, some more general observations. I’m not sure, but I think the hobbits may be metrosexuals. They all have long shaggy hair and seem to enjoy hugging and touching each other. Not that there’s anything wrong with that. In an effort to avoid this characterization, Rudy goes so far as to pick up a female bartender. (As Russ noted: “Hey, free drinks for life.”)

I was rather disappointed by the costuming. All the bad guys look like members of that band GWAR, or maybe Rob Zombie. It’s so 1995. They all bleed black, too, just so we’re sure they’re really bad. The good guys all wear white or some other light color, so we know they’re good. This is what we call obvious symbolism.

The war and fighting scenes are massive, with what appears to be hundreds of thousands of people going at it. But since they’re all fighting with swords — except for the guy from Pirates of the Caribbean, who uses a bow-and-arrow, like Bo Jackson — it’s hard to get a grasp on what exactly is going on; it just looks like a bunch of guys slam-dancing. There’s very little blood or gore.

It’s tough to single out any performance as better than another. If I had to pick, I’d say Rudy was the best, even though his British accent comes and goes. Elijah Wood has never met a scene he couldn’t overact in. He gets the worst scene award, for a part near the end where it’s a tight shot of his face and he’s supposedly appearing free of all burdens, though it just looks like him staring into the camera and making a goofy open-mouthed expression, a smile crossed with a frown. I can’t imagine what the script read for that one:

All of this probably sounds like I didn’t like the movie, but that’s not true. I did like it. I didn’t love it, but I liked it. Visually it’s often stunning, especially the landscapes and the wide shots with the soldiers preparing to get it on, though I suspect that’s mostly computerized stuff. Even though the thing lasted three and a half hours, for the most part it moves along at a brisk pace, although I could have done without some of the scenes where the hobbits are staring longingly at each other.

Still, you should probably go see this in the theater. You need the booming sounds system and the feeling of being in there with a crowd that cheers and laughs, because sitting at home on the couch it’s too easy to slip out of the film’s feeling. For what it’s worth, when the movie ended there were dozens of people in tears in the theater. These are probably the people that have read the books and have been waiting for these characters to be brought to life on the big screen. After 210 minutes, though, Russ and I mostly just needed to get to a bathroom.

There’s all sorts of themes which are alluded to throughout: man vs. machine; nature vs. technology; class-system warfare. But the director, Peter Jackson, mostly skips over these ideas and instead just keeps hitting you over the head with the overarching theme: Good fights bad.

Who do you think wins? Yep.

And you kind of have that feeling from the start.