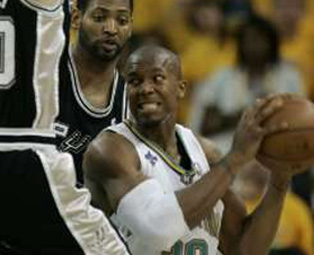 OK, I’m back. Thanks to everyone who wished me well. I’ve been back in New York in body for a few days, but I only started to return in spirit tonight.

Really quickly, the Pistons moved on, without their point guard and without any real sense of urgency. Their win makes me 9-0 thus far in my Playoff predictions. I think I’m still ahead of ESPN’s assembled stat nerds. If I’m the meathead dude who can’t do math, I’m glad I’m restoring the natural order of things. And in New Orleans, the Hornets rolled again behind David West’s 38 points and 14 boards. I’ve been saying for two months that the Hornets are working on doing something special, and they haven’t let me down yet.

I meant to keep this short, but thought I’d give you a little something special before dropping a handful of links on you tomorrow.

So let’s talk about David West. Besides turning into a dominant ground-bound forward, in his spare time he’s been dabbling with music, turning out tracks. What follows is (I think) the world premiere of David West as a producer. The song is called “I Really Mean It.” I can’t tell you where I got this, and I don’t know who’s rapping over the track (Byron Scott?), but I can promise you that David West created and produced the entire thing. Enjoy…