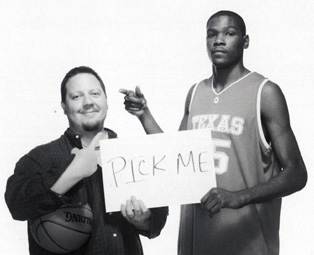 I’ll be completely honest: I’m pumped about the Draft tonight. I was laying in bed last night at 3:00 a.m., wide awake, just wondering what’s going to happen. Will my team, the Hawks, screw things up tonight? I hear the Horford pick is still on, but the Ridnour trade is off. I hear different things every thirty minutes, all from people I trust. So I don’t know what’s going on.

Still, this is fun, right? Rumors, crazy talk, outright lies…and my Hawks are right in the center of everything. I’m getting quoted in stories, I wrote a thing today for the Atlanta Journal-Constitution and I’ve been doing radio and TV every day. Am I a Hawks Draft insider? No, but I do know which stories are true (talk of a Ridnour or Monta Ellis trade) and which ones are totally false (that Belkin vetoed the Amare deal).

After the Finals we just witnessed, the NBA needed a good kick in the pants, an injection of excitement. And I think it’s getting one right now.

New York has been a fun place to be this week, because there’s been a lot going on. I went out yesterday afternoon to the Draft Media Day, which is always just a big clusterf…well, it’s a mess. There’s tons of local reporters around each guy fro their area, all asking the guy if they’re excited. Um, duh. Which is why I spent the hour out in a hallway chatting up various writers and reporters, trying to figure out who was going where. At one point I was talking to an agent-type when came walking by. The agent-type was holding a basketball at the time and Oden motioned for a pass, so he zipped the ball over to him, hitting Oden in the hands about waist high.

And Oden dropped it.

Oden immediately started dribbling it, saving the possession as it were, and Greg ran up to us saying, “See how I went right into my dribble, though? Did you see that?”

Oden also performed a dance routine wearing his dress shoes on the slippery carpet that he claimed was some sort of imitation of Gene Simmons. Very odd but very funny.

(By the way, I’d still take Durant first tonight if I was Portland. Oden will be awesome, but Durant will be better. And if you look at the picture to the left, Durant suggests that I should be the first pick.)

Last night after work I rolled out of the SLAM Dome and met up with a couple of buddies from adidas, Travis and Young B, to hit a few parties. First we went by a bash thrown for (and by) Greg Oden. There were a ton of people in this luxe penthouse apartment way downtown, and everyone was sweating bullets because it was about 98 degrees (with no Nick Lachey). Bumped into Sonny and Pam Vaccaro there and caught up with them (Ryan, Sonny says what up) and spoke to a few other folks.

(By the way, the breaking new that Oden was going to be drafted by the Blazers? I walked into that party last night and immediately saw about 5 people who work for or are associated with the Blazers. So I figured something was up.)

We rolled out of there around 9:00 and went by the No Mas party, which we told you about a week ago. And it was just as great as Ben predicted it would be. We hung there with Elena and C-Palm from ESPN the Mag while we watched people freak out over the various photos. All I know is if JR Rider’s picture didn’t go top ten, the people there weren’t real NBA fans. Inexcusable.

From there we rolled out and got a late dinner, and I found myself ’round midnight trying to catch a cab in the rain. I got soaked, but I didn’t care. Less than 24 hours until the Draft. Let’s do this.

By the way, I’m going to do a first tonight and attempt to live blog from the Draft. Cross your fingers that the NBA’s notoriously fickle internet access at their events is working. And come back to the homepage of SLAMonline around 6:45 so we can roll through the first round together.