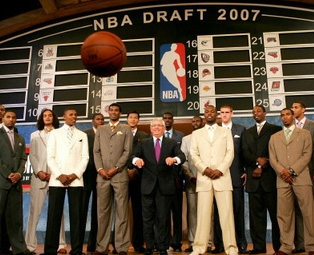 And then they rested. It’s been a marathon month, between the Conference Finals, the NBA Finals, a lot of posts on SLAMonline (I’ve done 34 posts on The Links since May 29, and that includes the voluminous NBA Finals Diary) and then Draft week and the Draft. Oh, and we produced an entire issue of SLAM somewhere in there, too. And I’m done. Tired. Wrung out. So after this post I’m out until after the Fourth of July. Heck, you guys probably need a break from me, too.

But before I close my laptop and glue it shut for a week, we’ve got a lot of business to cover.

• The Hat Winner
A couple of weeks ago I announced your chance to win every NBA team’s Draft hat, courtesy of our friends at adidas. I just closed the commenting on that thread with 329 entries, which is pretty damn impressive. A bunch of people correctly guessed the answer to the question: Name the player who will be the 30th pick in the first round.

The answer is Petteri Koponen, who was playing in Finland for a team called the Honka Playboys. (I know.) I randomly selected a winner from the names of everyone who correctly guessed the answer was…(drumroll)…reader D. Which is fitting because he was also the first person to post a comment. D, shoot me an email with your address and we’ll get your hats out to you. Hope you like hats. You’re about to be inundated.

On to the actual Draft…

• I want to begin by giving ourselves some props. ESPN had over a dozen reporters last night all assigned to figure out what was going on behind the scenes at the Draft, and there were plenty of other outlets there last night with multiple employees trying to report whatever secrets were there. And SLAMonline beat all of them on that Knicks/Blazers trade. Point being, if you were following along on our liveblog, you knew the truth way before the worldwide leader. And that’s always fun.

Anyway…let’s break the Draft down. Which teams did well? Which teams did poorly? I’m going to go through a few teams here and make comments. No grades, just observations…

• PORTLAND TRAILBLAZERS — So the Blazers went out and picked up about ten players last night. From Greg Oden to Rudy Fernandez to James Jones to Petteri Koponen to Channing Frye to Steve Francis, the Blazers made a lot of moves last night. They jettisoned Zach Randolph, and I’d guess Steve Francis never plays a game in Portland. I like their aggressiveness, although with such a young team I wonder if they weren’t a little too aggressive there.

• BOSTON CELTICS — Some people will surely find a positive spin to the Celts getting Ray Allen, and I sort of get it. They gave up a lot — Jeff Green, Delonte West, Wally Sexyback — but they get back Ray Allen, who demanded he be traded to a city with another WNBA franchise. Ray is a great player and he’ll fit in perfectly in Boston, but is this a team that can win a title? No. So is it worth trading three young guys for a 32-year-old with bad ankles who is good but not good enough to put you over the top? Probably not.

• ATLANTA HAWKS — I’m pretty disappointed by the way the Hawks ended up handling this Draft. First of all, it became obvious that there is a divide between the remaining owners and the front office. The owners wanted to take a chance and draft Yi Jianlian, while Billy Knight wanted to play it safe and take Al Horford, who plays power forward just like Josh Smith and the guy BK drafted in the first round last season, Shelden Williams. And then with the 11 pick he took Acie Law, which is a solid pick as well. So why am I upset? I just wanted them to be willing to take a chance. Making two safe picks is great if you’re a good team, but this is the slowest rebuilding project I’ve ever seen. And my patience is running thin.

One thing I do like about Law is that he had “LAW IV” on his jersey at Texas A&M. I don’t think they let you put numbers in your name in the NBA, and Law’s jersey number at Texas A&M, 1, is already taken by Josh Childress. So I think Law should get number 4.

• SEATTLE SONICS — Love what they did. They moved their All-Star two guard, but they picked up the best scorer in the Draft (Durant), a great small forward (Green; I was told Durant might play at the two!), two young vets (Mr. West and Wally Sexyback). I’d guess they’ll re-sign Rashard Lewis and come into the season young and ready to run. Now the fans in Seattle need to get crazy about this team and make it impossible for them to move.

• NEW YORK KNICKS — Zach Randolph might be crazy, but he also can put up 20/10 every night. Isiah continues his string of adding guys who are skilled but not necessarily complementary pieces. And he didn’t give up much of anything, considering Channing Frye was having trouble getting playing time last season. If money isn’t an issue, which it isn’t for the Knicks, this is a great trade.

• PHILADELPHIA 76ERS — Actually, I’ll pass on this and let Khalid answer it in the comments.

• CHARLOTTE BETCATS — I like the big move they made, trading Brandan Wright for Jason Richardson. Air Jordan realized any player who is good in the West becomes great in the East. And now the BETcats have a veteran explosive 2 guard to go with their myriad young post players. I think they just leap-frogged the Atlanta Hawks.

• GOLDEN STATE WARRIORS — Not such a big fan of what they did. BWright will need a little time to develop, and moving JRich to clear room for Monta Ellis makes sense down the road, but it reeks of a decision driven by finances. And that’s never good.

• DETROIT PISTONS — Maybe I shouldn’t read anything into this, but did anyone else notice the Pistons drafted three guards (Stuckey, Afflalo, Mejia)? They wouldn’t be preparing for Chauncey to walk, would they?

• MILWAUKEE BUCKS — Why would you ever go and get a player who does not want to be on your team or in your city? This is like Orlando demanding Billy Donovan stay and coach. I hope Milwaukee can either trade him or convince him to stay, because Yi was looking like Eli Manning up there on the stage.

How did your team do? Holler back below. And I’ll catch you guys next week…