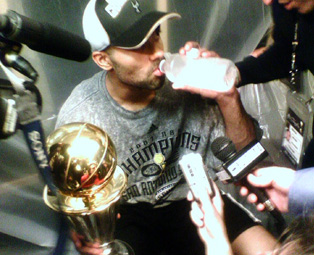 CLEVELAND — It’s 3:42 a.m. as I sit down to write this. Next to me on my desk here at the hotel is a cork. The NBA has pretty strict rules about locker room behavior. We writers aren’t allowed to ask for autographs, aren’t allowed to pick up any memorabilia, etcetera. But this cork, it was one I just had to have.

This cork came from Robert Horry. He popped a bottle of champagne to celebrate after the game, after winning the seventh championship of his career. The cork fell to the ground, and I figured nobody would mind if I kept this one little memento from the 2007 NBA Finals. So I kicked it over near me, bent over and stuffed into my pocket. David Stern might be angry with me, but I don’t really care. And I don’t think he’ll care much either.

Last year in the Miami locker room after Game Six, things got out of hand, fast. I squeezed my way into that locker room about fifteen minutes after the Finals ended, and it was like walking into a Girls Gone Wild video, except there were no girls. Jason Williams doused me with Bud Light, Shaq was dancing, dudes were screaming. I think Antoine Walker stabbed someone with a trident.

But the Spurs locker room tonight was, to be generous, subdued. It was almost as if they had another series left to play. Tony Parker sat in his locker sipping a bottle of water, clutching his Finals MVP trophy like it was a Desperate Housewife. Matt Bonner was eating an apple, because, as he said, it was unlikely that anyone had ever eaten an apple to celebrate a championship, so he wanted to be the first.

And in the middle of the room, Robert Horry stood there giving interviews. I asked him if it was the calmest championship locker room he’d ever seen, and he said yes, it was. For these Spurs, winning titles has become business as usual — they’ve won 4 since 1999 and 3 in the last 5 years. Like it or not, they are a dynasty. Not a very dynamic dynasty, but a dynasty for sure.

As Horry headed off to the interview room, I asked him if he’d decided what his future held. He’s alternately declared he’d be retiring after this season and that he was going to play a few more seasons.

“One more year and then I’m retiring,” Horry said. For real? “For real.”

The Spurs may not be built to thrill, but they are built to win. Next year they’ll return this entire team, and they immediately become the favorite to repeat. If you want to against them, they’ll out-run you. If you want to get them in the halfcourt offense, they’ll out-execute you. No matter what you throw at them, they’ll catch it, throw it back at you and mortally wound you. Winning games it what they do. None of the Finals games were particularly memorable or thrilling, but the Spurs just did what they do. Sure, they might have played a depleted Suns roster and been the beneficiaries of Baron Davis’s first round heroics, but they had to win a lot of games to win the title. And they did.

Earlier yesterday I was on a local TV network (Sports Time Ohio) to talk about the Finals, and the host mostly wanted to talk about the Cavs. That was understandable, since we were on a Cleveland station. So I spoke in generalities — the Cavs could win tonight, the Spurs might not come to play. And at the end of the interview the host asked me for a straight-up prediction for Game Four. Who was going to win? Well, the Spurs, I said. The Cavs never had a chance. LeBron got LeBroomed.

As the Spurs were being presented with their trophies out on the floor, I found myself standing along the baseline of the court. Behind me, I heard someone warning people to please stop bumping into her. Then she started calling my name. I turned around and found Gloria James, LeBron’s mom, polishing off her dinner. I sat down with Glo, and she talked about how proud she was of LeBron. Nobody predicted they’d be challenging for a title this early, but there they were in the NBA Finals. They’re such a young team and they’ll continue to improve, and I have a feeling we’ll be seeing a lot more of LeBron deep in the postseason for years to come.

These Finals might go down in history as boring or just plain bad, but I’ll always remember them for being a series in which the Spurs cemented their place among the elite teams in NBA history. (Also, I will never forget the blistering rant man ESPN Insider Chris Sheridan unleashed on some poor manager at the media hotel tonight when dude came over to tell us they were shutting down the hospitality suite. None of us at the table saw it coming, but it was an epic diatribe. I can’t go into too much detail as this is a family website, but it really was a thing of beauty. Someone said those of us who saw it go

down need to get WITNESS SHERIDAN t-shirts printed up. That’s how classic it was. I’ll take a XXL, please.)

In a few hours I’ll board a plane and head back home to NYC. I’ve been on the road for 9 days now, and strangely, I’m going to miss these NBA Finals. I’d never spent much time in San Antonio or Cleveland, but both cities were great places to hang out and see one of the basketball team of the modern era ply their trade. It’s been fun to write these updates for SLAMonline, too. Hopefully you guys enjoyed our coverage as much as we enjoyed writing it.

Next week I’ll be back in the SLAMdome, working on the next issue of SLAM. I’ll get caught up in deadlines and editing stuff, and everyone’s attention will soon turn to the Draft.

Somewhere, Robert Horry will be placing his order for his seventh ring, the most ever by a player not on the Celtics. He’ll return next season and hobble around, probably knocking down at least one clutch shot somewhere along the way toward his shot at an eighth ring. We’ll stop thinking about Robert, stop thinking about Tim Duncan. But the Spurs will stay sharp.

And If I ever forget just how good this years Spurs team was, I’ll always have that cork to remind me.