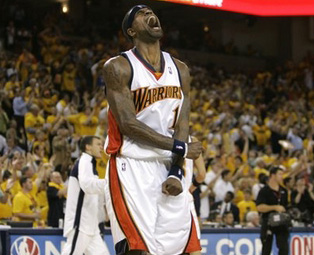 Well, I stayed up late last night to catch the NBA action and post post-game notes. Then, as soon as the game ended, I opened up my laptop to post these notes and…the internet went out. Just flickered back on, so I’m gonna post this as fast as I can and let you guys talk it out in the comments section.
I watched all of the Miami/Chicago game and the Dallas Golden State game.

Didn’t see any of the Nets/Raptors game, and I feel bad about that. I couldn’t even get out to lovely East Rutherford to catch the game in person because we had too much stuff going on at the SLAM Dome today. (And let’s be honest here: As good as the Nets and the Raptors are, the two big games tonight were the other two games.)

From the highlights I saw it looked like the Nets came to play tonight. This doesn’t happen often anymore, as the Nets are aging before our eyes. And by “the Nets,” I mean Jason Kidd. Talk all you want about Vince scoring and the Nets needing Richard Jefferson healthy, but without Kidd out there going full speed all the time, the Nets don’t have a chance from game to game. That’s a lot of pressure for one person, but Kidd is rock solid, even with all the divorce silliness swirling around him.

The Raptors are a good team that are going to become a great team in a year or two as they jell and add a player or two. But I can’t shake the feeling that the Nets are going to win this series. Kidd’s going to make sure of that.

I thought the most interesting thing about the Miami/Chicago game was when the fourth quarter came around and suddenly everyone in the arena affiliated with the Heat, both fans and players, seemed completely devoid of energy. It was almost as if kryptonite had been blasted through the air ducts, and the only protection was to wear a Bulls jersey.

The Bulls opened hot, but the Heat came roaring back in the second quarter as the Bulls couldn’t stop turning the ball over. The announcers kept praising Miami’s defense, though to me it seemed like the Bulls were just playing poorly, passing the ball directly to Miami players. The Heat, to their credit, took advantage of the turnovers and built a lead. Wade and Shaq in particular looked good. The Heat held the lead in the third, but the fourth happened and everything seemed to fall apart.

The Heat also were totally reliant on Dwyane Wade. Shaq had his moments, but down the stretch the Heat just kept running those isolations for Wade, over and over, and eventually seemed to just give up.

The Bulls generally play much better when they can get out and run. Miami kept them from running most of the night, and the Bulls couldn’t make a run to get the lead back. Then, in the fourth quarter, suddenly things started clicking for the Bulls in their halfcourt sets. It helped that the Heat seemed to be playing with their legs tied together. But could we have witnessed the maturation of a really good team into a great team tonight?

You couldn’t have picked a better contrast to the low-energy Miami fans than the raucous Golden State fans, all wearing their gold “WE BELIEVE” t-shirts. (Not sure I like the “WE BELIEVE” theme, because it’s almost like they’re admitting that the Warriors aren’t very good. “We believe in this streaking Warriors team, even though there’s no frigging way we can be seeing this!”)

The thing is, even when Dallas was down 20 with 16 minutes to go, I wasn’t totally convinced the Warriors were going to win. The Warriors played an incredible game last night, with almost every guy playing perfectly. How many times have you seen a team shoot something like 60 percent in the first half and then turn ice cold in the second?

Avery Johnson used a lot of his big men again last night, but it didn’t matter. The Warriors controlled the game all night. Dallas was whiny, looking for calls, and Golden State grabbed the game by the throat and wouldn’t relent. (Probably a bad analogy to use with Golden State involved. Sorry.) Golden State’s confidence was off the charts all night. As long as the Warriors don’t stop believing, they’ll stay hot. I’m very curious to see how far they can go.

Dirk was particularly terrible. Sure, he finished with 20 and 12, but when his team was down and looking for someone to take over, he didn’t have it in him to carry the Mavs. Then the Mavs totally unraveled, picking up Ts and losing their cool.

The TV highlight of the night was Jim Gray stumping David Stern. He got The Sternbot to stammer when he asked him about the Sonics moving to Vegas, and before Gray could put Stern on the spot again he did his old trick of talking about the broadcasters and joking around to change the subject. He looked to be about 5 seconds from strangling Jim Gray on live TV.

I also enjoyed watching Avery Johnson in HD. I don’t know what kind of gum he was chewing, but his tongue was the color of a Smurf.

Finally, I got a text message tonight from SLAM senior writer Bonsu Thompson that read, “Imagine both 06 finalists getting bumped first round.”

We may not have to imagine it for long.