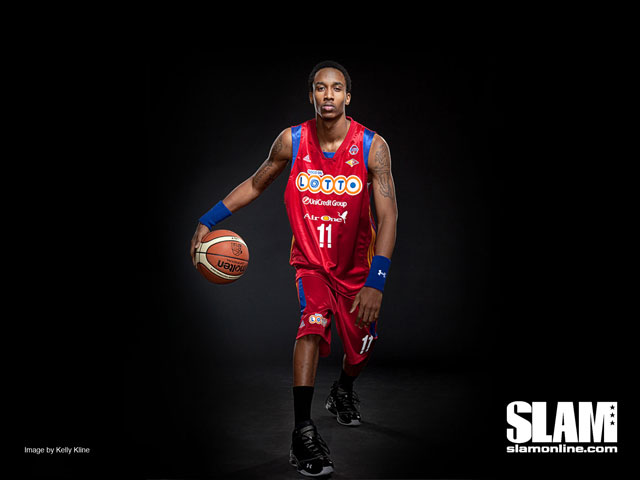 So…long time, no talk. I hope you don’t take it personally. We’re still friends, right? Still cool? Good. Because you understand, don’t you? You, you SLAM readers and fans, you guys know we are grinding over here at the SLAM Dome, working hard to put out the very best magazine we possibly can, month after month after month. You may have just received or finished reading SLAM 133, the tenth anniversary issue, but here in the Dome, we just yesterday got SLAM 134 out the door and to the printer. It is another dope issue, this time a theme issue, one I’ve been hoping we could pull off for a while. It wasn’t easy but we pulled it off. You’ll see it here on SLAMonline soon enough.

In the midst of all that, I also had to work on the season premiere of  “The Beat” on NBA TV, the show I’ll be appearing on every week for the remainder of the season. I’ve done more radio show appearances than I can even begin to tabulate, and I’ve discovered the secret is to be able to talk in coherent sound bites for 20-30 seconds at a time. The host asks you a question, and then your job, as an “expert” guest, is to carry the show for a few seconds. You need to say something interesting and insightful that people haven’t heard elsewhere, and you can’t stammer and stutter. And then, if you can manage to be funny on top of that, you’re good.

(Speaking of radio, the L.A. Times’ Lakers bloggers Andy and Brian Kamenetzky had me on their  Lakers podcast yesterday   for ESPN 710. Fun stuff.)

(And while I’m immersed in schedule notes and shout-outs, when the Hawks battle the Knicks here in NYC on Wednesday night, Nov. 11, I’ll be sitting in with Steve Holman, the Voice of the Hawks, doing color commentary on the Hawks radio broadcast of the game. I’ll post a link where you can listen online as the date approaches. Might need help getting someone to record it again, too.)

I’ve done a fair amount of TV, but usually either as a guest being interviewed, or on taped stuff, where you can screw up and it doesn’t really matter. On “The Beat,” I’m responsible for an entire segment about the internet and blogs, where I’m gabbing and moving things along and introducing new subjects. That’s something I’d never done before, so it was interesting to do it for the first time on live television. It didn’t help me look any smoother as I was on with three pros — Marc Fein, Shaun Powell and David Aldridge. But they carried me and the show was good. Here’s the final segment (I’m doing it via Skype live from my desk in the SLAM Dome)…

• It’s been interesting to watch the first week of the NBA season, if for no other reason than to see Brandon Jennings killing everyone he comes across. If you are a SLAM reader, it should not come as a total surprise.

Now, our good friend Chad Ford from ESPN.com wrote a story noting that he had Jennings in the top five of his mock draft for the last year, but then he runs down a list of reasons teams passed on Brandon.

I’m not sure how you take a kid without a real body of work that high. I know this is a weak draft, but are we really taking kids who have struggled to produce in college or Europe in the lottery? I’m all for upside, but it’s ridiculous. If Jennings can’t get on the floor in Italy, how does he help my team in the next couple of years?

Now, maybe you’re a GM and you saw him play and you decided for whatever reasons that he wasn’t a good fit for your team. Fine. But if you looked at his skill set and deduced that he wasn’t going to be an effective NBA player, you were wrong. Brandon can play, just like most reasonable people knew he’d be able to do. You can admit that you were wrong, that’s fine. Some teams didn’t need a point guard, and I can understand passing on Brandon because of that. Other teams say he didn’t test well or didn’t play well in their one-on-one workouts against other point guards. Hey GMs, if you’re looking for a great one-on-one player, I think The Professor is still available!

Brandon’s numbers in Europe weren’t eye-popping, but his ability was. I guess you had to see him play to understand that. And I guess a lot of GMs didn’t do their jobs.

By the way, my favorite part of this dunk over Paul Milsap was how Melo pounded his heart afterwards and yelled, “I’m back!” Now go back to this and look at the end of the post, and look at what Melo told me back in August.

• The CP3/Rondo cold war is amusing if only because I wonder if this could turn into something more long-term. Remember how Jordan supposedly kept Isiah from being on the Dream Team and winning a gold medal? Well, you know how CP3 is close with LeBron and all the guys currently involved in USA Basketball? Will CP3’s private recourse be keeping Rondo from ever getting a gold medal?

• How about the contract extension the Nuggets signed with Renaldo Balkman? It’s a three-year deal, and I’m assuming it’s for a reasonable amount of cash, but what’s really interesting to me is that they put in bonus money for minutes played and for the amount of wins the Nuggets have. Balkman can’t really control his own minutes, obviously, but according to Hollinger his money escalates at either 1100 minutes or 1250 minutes, as long as the team wins 42 games. If he averages about 14 and a half minutes per, like he did last season, he’ll total just over 1200 minutes this year. And if Balkman is logging more than 1200 minutes in a season, will the Nuggets be winning more games than they lose? Either way, fascinating contract.

• I like that Lou Williams was “stunned” to hear that Pearl Jam dedicated a song to him at a recent concert in Philly. He was probably mostly surprised that there was a band called Pearl Jam.

• Jerry Sloan is still gangsta, by the way.

After the Jazz got knocked off by the Rockets earlier this week, Ross Siler wrote in the Salt Lake Tribune that Sloan “called out his team in so many ways after the game, I couldn’t even get them all in my game story.”

“Well, we couldn’t keep them in front of us,” Sloan said. “I mean, what am I supposed to go guard them? Hell, no, I couldn’t guard them, and neither did we.

“When then drove by us, they’d find somebody open and they’d make a pass for an easy shot and that’s what we had. That’s basketball at its best, and they showed us what it’s like.”

More on the defensive shortcomings: “If you’re looking at a guy’s rear end all night, how can you say that’s good defense? And that’s what we looked at as the guys drove by us – – we got a good look at their rear ends and that doesn’t give you much of a chance to stop them.”

• Check out Rafer’s response at the end here when asked about nobody on the Nets retaliating after Chris-Douglas-Roberts took a hard foul. I love that he began his answer with, “Indeed.” Who is he, Sherlock Holmes?

• How about Rasheed Wallace picking up a technical foul after he felt he was fouled and the refs actually called a foul on the play! Guys normally get T’d up when they don’t get a call, not when they get the call. But not Sheed. Which is why we love him.

That’s that for this week. Have a great weekend and catch you all next week.