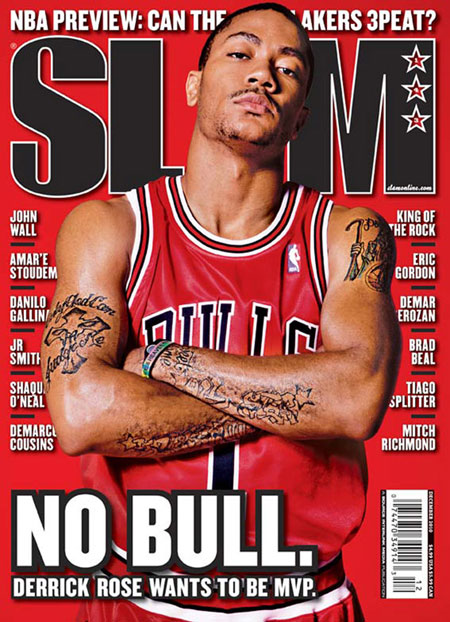 ATLANTA — What up, peoples? It’s Friday night and I’m sitting halfway up the lower bowl here in the Highlight Factory. I’m working on some stuff for the next issue of SLAM, and I figured this weekend was a great opportunity: I can be here specifically for Mother’s Day (as far as my Mom knows), and while I’m here also catch a couple of NBA Playoff Games, between the Bulls and Hawks.

It was interesting to arrive here today and hear so much Hawks talk on the radio. Usually, by the time May comes around, Atlanta talk radio is all about the Braves and spring football. But the Hawks are alive and relevant right now. Which doesn’t mean anyone has any idea what’s going to happen tonight. I taped a little piece for NBA Entertainment, and they asked me for a prediction, and my prediction was that the Hawks could either win by 10 or lose by 20. I really have no idea how this is going to shake out.

• Went into the Hawks locker room tonight for the first time in a while, and Zaza Pachulia claimed it was the first time he’d seen me at a game since 1998. I also had a long discussion with Al Horford about the singer Juanes.

• Was hoping to get Mutombo around Hawks VP Arthur Triche to re-enact a “You still work for Hawk” moment, but couldn’t make it happen.

• Tipoff is at 7:00, which sort of stinks because Atlantans are not only late -arrivers, but Friday afternoon traffic here is not a game. I took some surface streets to get here (shouts to JR Rider) and made it with time to spare.

• Bulls open with screen for Deng, who bangs in a jumper. Hawks run their customary game-opening pin-down for Joe, who holds the ball then misses a long jumper. Rose gets the rebound, zooms upcourt and gets a layup. His ankle looks fine. It’s 4-0 Bulls, 11:11 left in the first, and Larry Drew burns his first timeout of the game. I’m just guessing here, but that’s probably not how the Hawks wanted to open the game.

• Out of the timeout the Hawks work inside to Horford, who misses and Rose gets to the line on the other end. Hawks finally get a defensive three second call on the Bulls and Marvin Williams gets them on the board, 6-1.

• Well, there ain’t no party like a Jeff Teague party. Dude gets a running layup with an and-one, drives and gets another layup, bangs in a 19-footer, then scores another layup. Only problem is the Bulls are scoring, too. Bulls lead 15-12, when Jamal Crawford checks in for Marvin Williams.

• The Bulls are apparently using their “Let Jeff Teague dominate and stop everyone else” defense. Teague has 11, the Hawks have 16. The Bulls have 22, and are 9 out of 11 from the floor.

• Well, 4:15 into the first, and Boozer and Bogans each have two fouls. J-Smoove drew both of those fouls on Boozer.

• For all the good he’s doing on one end of the floor, Teague isn’t really doing much to slow Rose, who has 15 (shooting 6 of 6) of Chicago’s first 26 and is putting on an offensive clinic.

• Finally, a moment of unity between the Hawks and Bulls fans here when “Just a Friend” plays over the PA system, and everyone sings along. It’s still true, decades later: Nobody beats the Biz.

• Hawks start the second with Zaza, Al, Marvin, Teague and Crawford. Not sure if I expect these guys to really crank up the defense. Bulls give Rose a break.

• And then my night took a turn. I ran into someone I know, and stepped out into the hall to talk to him. Then I ran into someone else, and then someone else, and then someone else. So I missed most of the second quarter. I saw the Bulls crank up a big lead, and then the Hawks creep back and at the half, the Bulls were up 56-43. Rose only scored 4 in the second quarter, but Watson and Korver all turned in big performances. Bulls bench has 21 points at the half. Hawks bench has 6 (Crawford 5, Zaza 1). And then Jamal Crawford got a technical foul as the Hawks were walking off the floor, as sort of a rotten cherry on top.

• Rose hits the techincal free throw to start the half, and then a three, to put Chicago up 60-43. Marv gets 2, Bogans gets 3. The Bulls have just had more energy and effort tonight, the Hawks have seemed a step slow all night.

• A Horford bucket makes it 63-49. Boozer misses, Smoove rebounds and cautiously drives the length of the floor before sinking a runner, cutting the Chicago lead to 63-51. Tom Thibodeau calls a timeout.

• Bulls turn it over out of the timeout, and the Hawks end up with Josh Smith throwing an alley-oop to Marvin Williams on the break. I would’ve felt better if that was the other way around.

• Since that timeout, Bulls outscored the Hawks 6-0, until a Smoove running hook shot in the lane makes it 67-53.

• Boozer hammers a dunk on Josh Smith, but is called an offensive foul. I didn’t know Boozer had that in him.

• The amazing thing about watching Rose play, particularly in person, is when he gets out into the open floor with the ball and turns up the speed, and he just flies past everyone else. It reminds me of when I went to that race car driving school a few months ago, and we were on the track with Joey Logano, the NASCAR driver. Even though we were all in the same cars, he was somehow able to make his car go significantly faster than the rest of us. It looked like our cars were parked, as he weaved in and out of us and sped past everyone on the track.

• In between the third and forth quarters, I ran to the bathroom on the concourse, where a fan in a Mike Bibby jersey was lecturing everyone else in line about how the Hawks were still in this game. I came back out and the Hawks were down 15 with 10 minutes to go.

• As good as Chicago’s defense has been all season — and it’s been pretty good tonight, too — tonight their offense has been pretty great: With 9 minutes to go, they’re shooting 48 pct from the floor, 47 pct on threes, have 17 assists and 17 offensive rebounds. And it’s all coming from Rose. Bulls up 86-71.

• During a timeout with 8:57 to go, a bunch of t-shirts are parachuted down from the ceiling. Of course, one drops right to me. (I gave it away, I swear!)

• Hawks score, get a steal and score again, and suddenly it’s an 11 point game with 8:12 to go. Thibs calls a TO, and the Hawks fans start coming alive a bit. Al Horford and Larry Drew are applauding…and Philips Arena is back up in this.

• The teams exchange misses, and Rose hits a 3 with 6:51 to go. Bulls up 91-75. They exchange a few more misses, and Rose crosses over Jamal and hits another step-back three. 94-75, Bulls. MVP chants breaking out around the arena. Rose has a career-high 44 points by the way.

• Khalid texts me and says he can’t believe he can hear MVP chants for Rose here in Atlanta. I text him back and say the way he’s playing, I’m about to start chanting it, too.

• 4:21 to go, the Hawks yank Joe Johnson, Josh Smith, Horford and Crawford. Thibs takes out Joakim, but leaves in Rose. Couldn’t his ankle use the rest?

• Emanuel Lewis just walked by the press table. That was fun.

Basically, Rose went the heck off tonight. I’m not sure that NBA All-Star alumni team would have stood a chance.