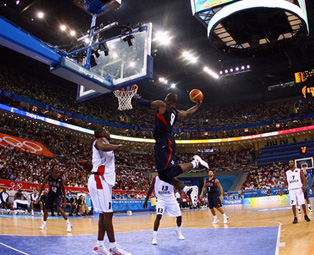 Here we go, Team USA vs. Angola. I think Team USA is a heavy favorite, considering I don’t know anything about Angola and I don’t think I could name a player on their basketball team. Team USA is going with their now-regular starters: Kidd, Kobe, Melo, Bron and Dwight. Should be interesting to see if Melo and Kobe can get on track.

• I think Doug Collins just said Dwyane Wade has led the USA in scoring in every game, from the exhibitions to the game against China. Breen says it will be a surprise if Angola is “even competitive.”

• Game begins with Kobe missing a three and Angola dunking. LeBron drives and scores to tie it up.

• Three from Angola! Contested, but still. Then Melo comes down and sinks a long two, and one. Game tied at 5.

• Angola’s best player is named Cipriano. I heard he throws a mean wedding reception, too.

• Sager reports that Angola had a team meeting and they decided that their goal as a team was to not lose by more than 40. Seriously.

• Dwight Howard gets one free throw and USA goes to a full court press. Angola immediately turns it over, then Kidd does, too. Look, I’ve been saying this for weeks now, but I don’t get why Kidd is out there so much.

• Angola to the line and they take a 7-6 lead, with 7:55 left in the first. After Kobe bricks a three, Dwight dunks the rebound to put USA ahead.

• For an alleged defensive stopper, Kobe sure gets beat a lot on the perimeter. I’m just saying…

• Collins points out that when the USA played Angola in 1992, the score was 7-7 early on, and then the USA went on a 46-1 run. I didn’t know George Karl was coaching Angola back then, but it sure sounds like it.

• Five minutes left in the first and USA leads 14-11. Bosh, Chris Paul and Wade check in.

• LeBron’s starting to get this international game. He drives in and tosses it back out to the three point line to Wade, who nails a three. 17-11.

• USA goes to a zone, and Angola promptly nails a three. Then Tayshaun wets a three, then gets a steal and dunks. Tayshaun looks great early on, which makes me wonder why Coach K hasn’t been playing him at all over the last week.

• USA holds for the final shot of the first and Bosh gets hacked hard underneath by Ambrosio. Guess that was the foul of the gods. Bosh makes both free throws and Team USA ends the first up 29-18. Team USA still finished just 2-6 on threes, almost all of them wide open. Kobe was 0-3 with a turnover.

• USA starts the second with Kidd and Williams in the backcourt, with Melo, Redd and Howard inside. Melo and an Angolan trade threes. 33-21.

• Angola goes zone and Dwight stands under the rim and spreads his arms, and in the process he whacks an Angolan through the lane. Two fouls on Dwight.

• Dwight dunks to make it 35-21. If you are wondering, all that’s happening is Angola is shooting threes every time down (and missing) and Team USA is getting either open jump shots or Dwight Howard is catching under the basket and dunking (he’s 5-for-5) or getting fouled.

• Kobe checks in and bricks a three. What’s cooler than cool? Kobe!

• Some dude named Morais on Angola nails a three.

• Ambrosius spins in the post and Bron comes over on help defense and spikes the ball off the floor and about ten feet into the air. Then Boozer gets beat off the dribble. A Boozer/Kidd double team must be like being guarded by nobody.

• Angola dumps it into the post and Kobe leaves his man to help. Angola tosses back out to Kobe’s man and Kobe hacks him as he misses a three. He nails all three free throws. Doug Collins points out Kobe didn’t need to help there, but then, it was Boozer defending.

• Wade makes a corner three. That makes him 10-for-10 from the floor for the tournament. Bron drives for an easy layup to make it 44-32.

• Chris Paul pokes a ball away and Bron saves it through his legs back in to CP. CP looks up and hits Kobe all alone under the rim. For some reason, Kobe waits for everyone to catch up to him and he passes it to a trailing (and guarded) LeBron for a tough and-one layup. Why didn’t Kobe shoot that ball? That was really strange. Does he think they’re playing the Suns again?

• Bron makes a behind-the-head pass to a wide open Bosh on the break for a dunk. Then CP hits Bron on a break for a lefty dunk in traffic.

• USA’s opened up a 55-34 lead. Then (Bob) Costa hits a three for Angola. So we go into the half with Team USA leading 55-37. USA’s really looked sloppy, but precision isn’t really necessary today.

• For Angola, Costa and Morais have combined for 23 points. You know what they always say: When you’re playing Angola, you mave to make someone other than Costa or Morais beat you. And that ain’t happening today.

• Second half, and Team USA goes with the same starting lineup they began with. By the way, Jason Kidd still hasn’t taken a shot yet for the entire Olympics. Dwight opens the third with an offensive foul.

• Dwight Howard and one of the Angolan big men start jawing, which is a bad idea. Meanwhile, Doug Collins is talking about the 1972 gold medal game.

• Kobe gets a dunk and lay-in, then gets a 360 on the break. Six quick ones for Kobe and Team USA leads 63-44. Then Kobe misses another three.

• And then Kobe misses another three. I guess the good news is that Team USA can’t make an outside shot to save their lives but they’re still up by 17. Maybe they’ll correct their averages with a red-hot game against Greece or Spain. They’re due, after all.

• Angola stays man-to-man, which I do not comprehend, and Wade goes baseline for a tomahawk dunk. Why wouldn’t you play zone end-to-end, especially considering Team USA is 4-for-16 on threes.

• Breen and Collins talk about my main man Ricky Rubio, who apparently had a key steal in Spain’s win over China.

• Deron Williams drains a three to go ahead by 24, 72-48. Chris Paul is kinda causing havoc on defense and doing a good job setting everyone else up.

• Bosh and Prince apparently visited the Great Wall yesterday. Sager quotes Prince as saying “It truly is one of the wonders of the world.” I’m glad we finally got some independent confirmation on that from a member of Team USA. I suspected The Great Wall of China was a wonder of the world, but hearing that from Tayshaun Prince actually confirms it!

• Instead Team USA comes out in a halfcourt zone trap. Run up the score, Coach K!

• OK, Doug Collins just claimed the Hawks didn’t draft Chris Paul or Deron Williams in 2005 because Joe Johnson was demanding that he be allowed to play point guard, but then JJ changed his mind after the first game of the season and the Hawks were stuck with Marvin Williams instead. Really, that was what Collins said, and he said it like this was common knowledge. Sorry Doug, but it sounds like you’ve been eating Billy Knight sandwiches again. The reason the Hawks didn’t draft those guys was because then-GM Billy Knight hates “little” guards and, don’t forget, most people had Marv ahead or even with Williams and Paul. JJ had to be pressured into playing PG.

• Eduardo Mingas begins the fourth with a turnaround jumper that gets stuck between the rim and the glass. That’s oddly evocative of Angola’s entire game tonight.

• Boozer checks in. Paul drives and hits a bank shot. Looks like CP is finally looking for his shots.

• Up 30 with 6 minutes left, and Coach K puts Melo back in the game. I guess he wants to get him going a little, because he’s been cold the entire tournament. I’d put Kobe back in too and see if he can get going. But I’m not a genius coach with a lot of endorsement deals.

• Sager interviews Candace Parker on the sideline. She said she spent the day relaxing and she “enjoyed being around the hotel.” Khalid is busy trying to figure out that room number.

• 3:13 left and it’s 93-67. Not much to say. Team USA was obviously way more talented, but they’ve looked very sloppy on offense. Defensively they’ve been fine, but they just can’t get going as a team from the perimeter, which is going to be crucial against Spain and Greece in the next two games.

Team USA may be 2-0, but they better meet with the shot doctor tomorrow. Greece awaits for Thursday.