Links in Vegas: Poker With LeBron 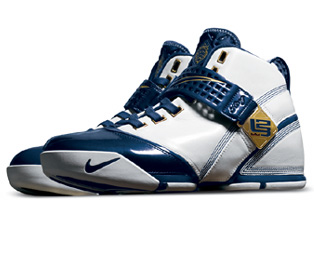 As I sit down to write this, it’s 4:49 a.m. back home in New York, which means I’ve been awake for nearly 24 hours now. Which means if I make a few typos here and there, bear with me.

As I wrote earlier today, Russ and I flew out to Vegas this morning with three goals in mind…

As I also noted earlier, the gambling didn’t start off so well. Disheartened, we headed back up to our rooms to grab a nap. I stopped to check my email and got a text about the Eddie Griffin tragedy. At that point it was still a rumor, not mentioned anywhere on the internet, so I started making some calls and trying to nail the story down. It took about an hour but I finally got it confirmed, so I wrote up that quick post and headed over to the Wynn Hotel.

I love the Wynn Hotel. The Wynn was where I had my first gambling experience one year ago, a momentous occasion that forever changed my life. So every time I walk into the Wynn, I get a little rush.

Some of our peoples from Nike met us at the door and escorted Russ and I back to a ballroom in the back. The interior of the room was draped in black and hung with dozens of black and white photos of LeBron in action — it looked like one of the interior hallways at Hogwarts. Moments later, Bron walked in with Nike designer Ken Link and the two sat at the front of the room and unveiled the LeBron V. Some random notes…

• The strap is removable.

• Every part of the shoe is inspired by part of LeBron’s life. Inside the tongue, for instance, is a map of the States with Akron prominently displayed, because LeBron “always wanted to put Akron on the map.”

• Each shoe has a different keyword on the side: vision, passion, family, winning, etc.

• The shoes are half a pound lighter per pair than the LeBron IVs were.

• The shoe has a “biposite bucket” that allows Bron to move while it provides support. The shoe also has full-length Zoom Air.

• A bunch of colorways are going to drop, including one that’s going to launch in China. “Which is very illegal,” LeBron joked.

• They noted that they take a new mold of LeBron’s foot every year. “I drink all water, too,” LeBron said. “I’m not doing anything illegal, that’s not why my body’s getting bigger. I drink a lot of water, a lot of Powerade.”

After about 20 minutes of Q&A, we were all escorted outside (by four showgirls, no less) to a huge terrace area overlooking the “European” pool. I thought this might mean that all the women there would have hair under their arms, but it didn’t — apparently that’s the area where women are allowed to sunbathe topless. (Unfortunately, nobody opted to do that while we were out there.) A huge V hung from the ceiling and waiters and waitresses walked around trying to pass off crab cakes and smoked salmon.

After everyone worked the open bar for a minute, we migrated over to a few poker tables that were set up. I’m not much of a poker player, but there was no buy-in at these tables, so I ended up sitting down with LeBron, a few Nike people, Bron’s partner Randy and some guy named Wes something-or-other. We all played a few hands together and I managed to get LeBron on the ropes once, although we were all going all-in pretty much every hand, since the chips weren’t worth anything.

LeBron didn’t hang around that long, maybe 10 minutes, and then he bounced to get some rest before tonight’s Team USA game. (I also ended up in a five-hand one-on-one match against that Wes guy. He won. Or maybe I let him win…)

We had some time to kill before dinner, so Russ and I rolled into the real casino with Ken Link and Nike’s Brian Facchini. I was still looking to redeem myself from earlier in the day, and sure enough, back at the Wynn, things reverted to be like they were a year ago. I went down initially, then fought my way back and surged ahead. And then it was time to eat, so we all went downstairs to the SW Steakhouse, where I had perhaps the greatest steak I’ve ever had: a 20 oz. bone-in ribeye that was unbelievably good. Russ had the steak as well (pictured at left) and neither of us could come close to finishing our steaks. I have a feeling that I’ll be paying for my steak for a few days to come.

Around 11 p.m. we headed back to our hotel to drop off a few things and ended up down at the casino at a $10 blackjack table. I fell behind then went ahead then fell behind again. After starting the session with $140, I was down to $60, so I bet $30 on a hand, doubled down and won both of those hands for a $120 payday (well, $90, I guess) just on that hand. By then it was about 1:30 a.m., and I as completely spent. So I cashed out and came back to my room to write this up.

And that’s that. Games start tomorrow. More tomorrow at some point. Later…