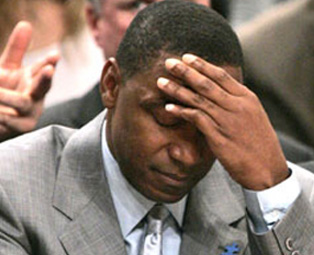 “He who vindicates me is near.
Who then will bring charges against me?
Let us face each other!
Who is my accuser?
Let him confront me!”
– Isaiah 50:8

Back in December of 2003, just three days before Christmas, Knicks owner James Dolan gave Knicks fans an early gift: He fired Scott Layden. At the time, this was considered just about the best thing Dolan could have done. Four years earlier, Layden had come to New York to build a winner. The Knicks had just been to the NBA Finals, and Layden set about insuring the team would remain a contender. He re-signed Latrell Sprewell, traded Patrick Ewing, gave Allan Houston $100 million, traded Marcus Camby and Nenê for Antonio McDyess, used a lottery selection on Michael Sweetney and gave Dikembe Mutombo a $9 million deal.

At Madison Square Garden, the chant of “Fire Layden” soon replaced “Let’s Go Knicks.” The Knicks payroll soared near $90 million. Everyone knew something had to happen.

Firing Layden? Not that big a surprise. But replacing Layden with Isiah Thomas? Nobody saw that coming.

In New York City, keeping a secret seems to be nearly impossible, but Dolan kept this under his hat so long that when word broke a few hours before the official announcement, everyone was shocked. And as weird as it was that Dolan would hire Isiah of all people, a person with no history or connection to New York or the Knicks, Knicks fans were mostly just excited that Layden was getting the boot. Anyone would be better than Layden.

On Dec. 22, 2003, as the announcement was being made, I wrote the following on SLAMonline.com:

Why Isiah Thomas? Well, he wasn’t terrible in Toronto. He did draft Marcus Camby, Damon Stoudamire and Tracy McGrady, after all. He screwed up because he wanted power, like he was staring at The Ring for too long. So he tried to put together a group to buy the Raptors and eventually got run out of town. Then he went to the CBA, where he was going to revitalize that league and make it an NBA farm system. Instead they went bankrupt. Soon after he wrote a book on how to succeed in business. And then he coached the Pacers, getting himself fired there because he wouldn’t establish a rotation and never seemed to really get a grip on things. Rick Carlisle replaced him and the Pacers are rolling now.

I think it’s safe to say that Isiah knows and can recognize talent. The big question will be how long he can stick around in New York without burning all his bridges, something he’s done everywhere else he’s been.

That wasn’t hyperbole at the end there: Every place Isiah has been, he’s left on bad terms. Detroit? No, we’ll take Joe Dumars, thanks. Toronto deported him, Larry Bird canned him in Indiana, the CBA imploded (after Isiah declined an offer from the NBA to buy the league) and all the owners hated him. He even opened a popcorn store in my neighborhood that recently closed down. For whatever reason, the post-NBA playing career Isiah truly seems to have had a knack for failure.

The important part of that previous sentence is “the post-NBA playing career Isiah,” because with so much bluster and noise surrounding him since he entered life as an executive that we tend to forget how transcendent he was as a basketball player. Just take a second and watch this.

Remember, Isiah was the MOP of the NCAA Tournament, one of the NBA’s 50 Greatest Players of All-Time, a 12-time All-Star, a two-time NBA champ, MVP of the NBA Finals, and in 2000 elected to the Basketball Hall of Fame. On the court, he could do anything he wanted to do.

Off the court, not so much.

As a jury of his peers reminded him today.

Just because Isiah has been found guilty of sexual harassment, it doesn’t mean he sexually harassed anyone. We all know our legal system has problems and it’s totally within the realm of possibility that Isiah is completely innocent. Just saying.

What we know for certain is that a lot of strange things were going on at Madison Square Garden. Different high-level executives hated each other, people were trying to get other to take sides, players were sleeping with interns…just a complete mess. In a way it’s not surprising in the least that the Knicks have been so bad the last few years. I know it’s a trite saying, but championship teams have championship front offices. Quality people create quality teams. The Knicks don’t have a quality team.

That said, Isiah Lord Thomas is guilty of sexually harassing Anucha Browne-Sanders. That’s in the books, people. The ruling could get overturned on appeal, but Isiah will always have been found guilty of sexual harassment.

What happens next is what I’m really curious to see. The Knicks will surely appeal the ruling. Which means they go into the season with a convicted sexual harasser as their head coach. I guess this is their right to do so. It’s totally strange and completely unsavory, but the Knicks can do whatever they choose to do. I’m guessing what they’ll choose to do is pay Browne-Sanders whatever they owe and move on as well as they can. They’ll act like this never happened.

But what about the Sternbot? No way David Stern lets the Knicks just keep on acting like nothing happened, right? They screwed with his League, he’s going to make them pay. I wouldn’t be surprised if Stern suspends Isiah, or makes the Knicks suspend Isiah. If Isiah returns to coaching without even a blip of a professional punishment, what kind of message does that send?

Whether or not there’s any immediate punishment awaiting Isiah, there is one result of this ruling that surely even Isiah has realized: Isiah Thomas will never get another job in the NBA. Before the ruling, even with his wild spending as Knicks GM on his resume, there was still a chance Isiah would be able to flash his Cheshire Cat smile at another owner and charm his way into another NBA job. If this whole Knicks thing didn’t work out, Isiah could grin and try again somewhere else.

But not now. No team could deal with the fallout from that hiring.

Working for the New York Knicks will be the last NBA job of Isiah Thomas’s career.

And don’t you bet he’s going to hang on to this job for everything he’s worth?

A couple of months ago, during the first round of the NBA Playoffs, I had to go up to the Knicks practice facility about half an hour north of Manhattan in Tarrytown. Nate Robinson was going to be on the cover of our annual Streetball special issue, and I was supposed to meet Nate in Tarrytown and then ride with him over to the court where we were shooting the cover in Brooklyn. I was supposed to be there around 9:00 a.m. I had a car service take me to the practice facility and we got there early, around 8:30 a.m. There was nobody around, the building was locked, there was nobody at the front desk, no cars except for a lone Range Rover parked out in front of the place.

I thought the Range Rover might be Nate’s, though I doubted he’d be around at 8:30 a.m. on a weekday morning. I sat in the back of the car service sedan and read the paper and drank my coffee, waiting for someone, anyone, to show up. I made small talk with the driver, who was from India, and I remember we talked briefly about cricket. He wasn’t a Knicks fan and had never heard of Nate Robinson, but he was excited to be driving around a Knicks player for the afternoon.

I was engrossed in Page Six when the driver snapped me from my trance. “There’s somebody,” he said.

I looked up and saw the front door of the practice facility opening. Out walked Isiah Thomas. He walked out to his car, opened the back door, leaned into the backseat and pulled out a few notebooks and clipboards and went on back inside. He never saw us and I never said anything to him. And a few minutes later, Nate showed up we headed for Red Hook.

To me, seeing Isiah like that was enlightening. Whenever I see NBA coaches, it’s either with the entire team at an 11:00 a.m. shootaround or before or after a game. You never see coaches at the office that early, returning emails, shuffling papers. The NBA Draft was a couple of weeks away, and I assumed Isiah was probably going through scouting reports, reading up on guys he might be selecting. I liked that sighting of Isiah, of a guy up earlier than everyone else, putting in the work so he could get a step ahead of the competition.

Of course, I guess he also could have been grabbing some court filings or depositions from his car.

That realization kind of ruins any image of Isiah the basketball coach, but that’s his reality now.

And that’s the world Isiah and Knicks fans are going to be living in for a long, long time.

“For what they were not told,
they will see,
and what they have not heard,
they will understand.”
—Isaiah 52:13-15
52
You Might Also Like