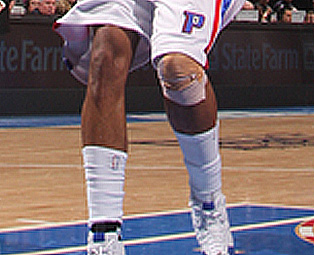 Gonna try something new here. Last night I watched the Hawks/Pistons game — yes, the entire game, even though the Hawks were down about 50 going into the fourth — while writing my column for Hawks.com (latest column is here), and as I usually do, I jotted down notes. Usually when I’m watching games, I don’t keep full-on game notes, but I do try to write down anything that could make for good Links material. Instead of most of this stuff never seeing the light of the internet, I figured I’ll try to flesh some of these notes out here today. Let’s see how this goes…

• If anyone out there works for Time Warner Cable in New York City, PLEASE holler at me. A few weeks ago I woke up one morning and my cable/internet was out. I have two TVs at home, and the cable signal comes into my apartment and then splits. One half of the signal goes upstairs to my bedroom to a smaller TV, and that cable was working fine. The other half goes around my living room to my flatscreen, where it splits again and powers my internet and my TV. That signal was dead, on both the internet and the cable. I unplugged everything and restarted it, and still, nothing. I then went over to where the cable splits and tried switching the wires from the splitter, thinking maybe the splitter was screwy, but had the same results. Then, all of a sudden, everything worked fine again.

That continued for a few days, and then, boom, I was running on half again. It came and went for a week, and then last weekend it went kaput for the entire weekend. I was going to call customer service then, but I knew they’d offer me a service appointment on like Tuesday or Wednesday, when there was no way I could be home waiting for the cable guy. I tried hooking it back up on Monday morning, to no avail.

I’m pretty sure I know what the problem is. Before the cable signal even gets to my apartment, it goes through my neighbor’s place and splits, so she and I basically share a line. By the time it comes into my place, it’s already weakened, so it goes through some kind of signal booster that Time Warner installed in my apartment. I think I’m getting just enough juice to power one of my TVs, but not both, and certainly not two TVs and the internet. A few years ago I asked the cable company what I had to do to get my own line run to my place, and they said the landlord had to take care of that. Whatever.

Anyway, when I got to work on Monday I called Time Warner Cable to get them to come do whatever they could do so I would have consistent cable service. You know, the service I PAY FOR EVERY MONTH. I explained what was going on to the customer service rep, and she asked me to walk over to my TV and reset the cable box. I told her I couldn’t do that because I wasn’t sitting around my house all day, I was at work. She told me to call back when I was at home. (Then she asked if I’d like to subscribe to their home phone service. I asked if my cable wasn’t working, would that mean I wouldn’t be able to call and ask for help. She said yes. I told her I would pass on their home phone service.)

Got home Monday night, ready to deal with the cable problem, and of course, everything was working fine. Great.

Things were perfect until this morning, when I woke up to find the signal dead again. I immediately picked up the phone and called the cable company, and after a few minutes of speaking my selections to their voice-activated menu, I got a customer service rep on the phone. I explained what was going on, and she said, “Sir, I’m sorry but our system is down right now. I’ll have to take your number and call you back when our system is back on line.” I sighed, and gave her my home phone number. Then I left for work.

What’s really strange is that technically I work for Time Warner, since I write stuff for SI.com. Isn’t there an employee hotline or something?

Anyway, I’m about ready to ditch cable and go to satellite TV or something like that. Whatever. Anything is better than what I’m dealing with right now.

• Sorry, had to get that off my chest.

• The first thing I noticed during last night’s Hawks/Pistons game was Rasheed Wallace’s knee brace. Instead of one of

those neoprene sleeves or one of those robo-braces, Sheed was staying true to the old school, rocking what looked like an Ace bandage wrapped around his knee. He only played 18 minutes last night, and I couldn’t find any photos of it from last night’s game, but here’s a picture (left) of the same brace from Detroit’s game against Jersey on Dec. 2. Have I mentioned before how much I love Rasheed Wallace?

• Seconds after I wrote that down, Hawks analyst Steve Smith also pointed it out, which reminded me of how much I like the Hawks’ broadcast team this year. The play-by-play dude is Bob Rathbun, who’s been around for a while and always does a solid job. And Smitty is terrific for being relatively new to the broadcasting game. I loved that last night he started talking about Sheed wearing Air Force 1s. How many announcers out there even know what Air Force 1s are?

• I’ve determined that there are 3 levels one must get through in order to be considered an NBA veteran. The levels are: 1) Why Me? 2) Why Now? and 3) It Wasn’t Me.

Basically, this all goes back to watching fouls get called on rookies and young players. Last night, Acie Law got tagged with a ticky-tack foul, and his response was Why Me? He didn’t know what he had done to cause the foul to be called.

Later, Marvin Williams picked up a foul, and his immediate reaction was, Why Now? He knew he’d commited a foul, but he didn’t understand why it had been called at that point in the game when it hadn’t been called previously.

Then, Rasheed got a foul and went into his patented It Wasn’t Me routine.

Those are the three levels of foul reactions in the NBA. You might see guys get called for a foul, but until they respond with It Wasn’t Me, they aren’t officially NBA vets.

• I know a lot has been made of Forbes magazine putting LeBron James on the cover, and Forbes is a really big magazine, but you’d think they could’ve fact-checked or edited their cover story a little. For instance, in the first or second paragraph it mentions LeBron’s 48-point Game 5, and the story references “NBC anchor Marv Albert.” Marv last worked for NBC in 1997. The story goes on from there, and I found two mistakes in reference to Maverick, LeBron’s cousin from Akron, before I finally just gave up on the story.

• Jason Maxiell better be in the dunk contest this season.

• A lot of people are talking about the Magic and the Celtics (and even Cleveland) in the East, but the Pistons look really damn good. Their halfcourt offense is sparkling lately, even with Sheed hobbled. The two things I think they could use is some bench scoring — though I suppose Jarvis Hayes and Flip Murray could provide that if they could be consistent — and a better backup point guard. I know the players all love Lindsay Hunter, but he was getting abused by Acie Law last night.

• When Rathbun pointed out that Tayshaun Prince and Josh Childress were both from the L.A. area, Smitty noted, “They raise ’em slim out there in California.” He later called them “long and longer.”

• Am I the only one ready for a fight this season?

• I’m late in saying this, but the latest Kevin Durant NBA commercial is dope.

• Just before the half, with the Pistons on a sizeable run, Mike Woodson inserted little-used back-up center Solomon Jones into the game. “Solomon Jones?” Smitty wondered aloud. “I just love that kid.” Just then, the Pistons ran an inbounds play from under their own basket where Jason Maxiell picked for Rip Hamilton. Maybe you don’t know this, but most NBA teams have a standing rule where you ALWAYS switch picks on inbounds plays. The Hawks apparently have this rule, although Solomon showed no wisdom and didn’t switch the pick.

• You really need to catch a Hawks League Pass broadcast if for no other reason than to see Dominique on the halftime show. Last night the host, former CNNer Jerome Jurenovich, pointed out that at the half, the Pistons had 10 offensive rebounds to Atlanta’s zero. “That’s a problem,” Nique said. Jurenovich then noted the Pistons had three guys with at least 10 points, and he asked Nique how do you pick a guy to shut down? “You flip a coin,” Nique said. A three-sided coin?

• Shelden Williams now plays exactly like Kevin Willis did when he was about 40.

• For some reason I was thinking that Jason Maxiell used to play in Europe, like the Pistons stashed him there for a year. I went over to Youtube to see what kind of highlights they had for Maxiell, and I stumbled across this, which seems a fitting way to end this post, being the holiday season and all…