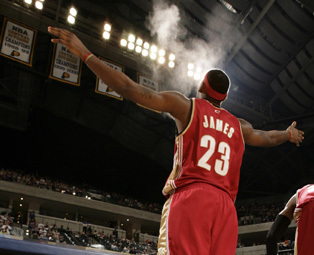 I was talking to my friend Shawn last night after Game 7 about this problem that I’m faced with, and he advised me to take this directly to you, the people. (Shawn knows about getting the people on his side.)

First of all, if anyone compares that game yesterday to the old Bird/Dominique Game 7, they don’t very much about basketball. I’m a student of the game, which means I watch a lot of ESPN Classic. First of all, that was the most important game in Dominique Wilkins’ career; I’ve already been to the NBA Finals. More to the point, though, Nique went 19-23 in that game; last night I went 14-29. It was a big game for us, just not the most important game of my career.

See, I’m going to win a championship some day. That might sound brash, I understand, but it’s the truth. I might only be 23 years old, but I’ve already played in All-Star Games, won a scoring title, I’m going to win a gold medal this summer, I’ve had the huge shoe contract, I’ve hosted Saturday Night Live, I posed like King Kong for the cover of Vogue and I’m trying to position myself as a friend to corporate America. I’ve done it all. Except win a title. And as much as I like Dominique, I am not trying to finish my career without a championship.

If you watched the game yesterday, I hope you saw what I saw — a team that is not very good wearing Cleveland uniforms. If I wasn’t on the Cavs, do you think we’d have been playing a Game Seven in the second round of the Playoffs? No way. Which is really disappointing, because we went to the friggin’ Finals last year and then did not improve our team. I’m no sure who’s idea it was to screw around waiting to re-sign Pavlovic and Varejao, but neither of them returned to form from a year ago after getting late starts. Then we went out and added…Devin Brown, a guy who was an intangibles guy for the Spurs but had been out of the NBA? Then we traded for a guy with zero mobility (Wally Szczerbiak) and a guy who can’t score or defend (Ben Wallace)?

This was our team that’s supposed to battle with the best squads in the NBA? And you wonder why I drive 150 mph on the freeway.

Meanwhile, Mike Brown and I are cool, and he might make a great head coach down the line, but I need a winner, here and now. If you want to make the team better by giving us a bunch of talented veterans and sticking with the unproven coach, go for it. Or give us a veteran coach to go with a bunch of guys who’ve won before. But going young and hiring an unproven coach? And hiring a first-time GM to go along with all this? Come on.

But you’ve never heard me go off about any of this, have you? Nope. I just continue to go out and play my butt off, game after game. Did you see how hard I was playing yesterday even with all those lame ducks around me? You think Kobe would’ve tried to carry those jokers to a series win?

Maybe I should’ve just shut it down in the second quarter and let us get blown out of the building. Maybe then people would’ve realized that this team needs some serious renovation. I’m not talking about bringing in another vet who can’t do what he used to do. I mean some great talent. Kevin Garnett wasn’t available last summer? Pau Gasol wasn’t available at the All-Star break? Carmelo isn’t available right now?

I understand that the cap can play a part, although that doesn’t seem to be an issue in other cities like New York or Dallas. Even if they don’t always make the correct moves in those places, the ownership there seems committed to winning. As I’ve learned through my work with corporations like Microsoft, you have to spent money to make money. Maybe that means temporarily going into debt or taking a loan or whatever that stuff is called (Maverick handles all my financials). Either way, the Cavs have yet to impress me with a commitment to improving above and beyond the NBA’s status quo. I can’t tell you how disappointing that is.

I hope you all understand how serious this winning a title stuff is for me. I love Cleveland, love Ohio, but I am not going to strap myself to a franchise that refuses to go all-out trying to win it all. If the Cavs don’t want to make real changes, I’ll make them for them. Remember, my contract is up in the summer of 2010. I’ll be 26 years old and will not be looking for money but for the best franchise I can sign with. I hope that team is in Cleveland, but if it isn’t, it isn’t.

I will not lose.

See you in Beijing,