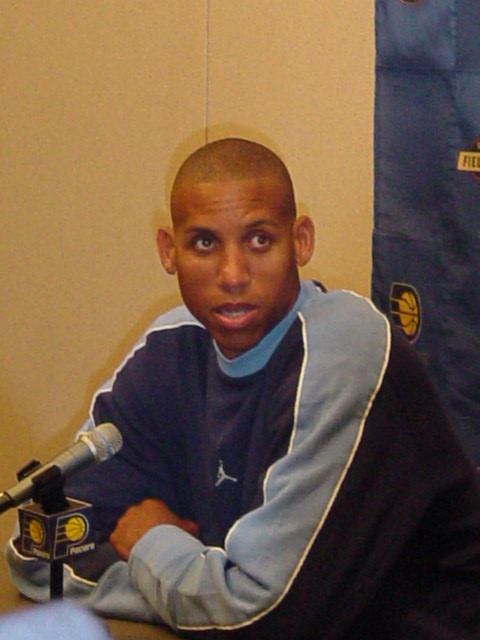 What up, people? I’m back in the SLAM Dome today after a weekend of vacation. But even the vacation got crazy busy, and I ended up having to turn off my Sidekick to get some peace and quiet. Which I eventually did. I was intending to do some SLAMonline updates from the vacation, but I couldn’t bring myself to do it — I needed a few days of not writing so that I could write again. A lot of writing is about rhythm, finding into a groove of sitting at my desk and getting on my laptop and banging out a few hundred words at a time. After writing more or less every day for the last six years, I know what it takes to crank the words. And I was running out of words and needed a break.

But then, we’d just closed an issue in which I had to write a lot of stuff (including the Shaq cover story) and then without a break we finished our annual SLAM presents Streetball issue (where I had to write another long story — details on that issue coming next week) and now we’re going right into SLAM 110. So I get to hit the road later this week and then again next week to work on a very cool cover for SLAM 110. Then after that comes the NBA Finals, during which your faithful correspondent will covering the entire thing for you guys, live and in person for each and every practice, press conference and game.

So basically, The Links are going to get in where they fit in for a minute. Luckily, and it only took us about 5 years, but SLAMonline.com is banging these days. Sam’s been posting content like he’s Curt Schilling. (I am disappointed Sam didn’t shave his head like all the Mets did, except for their chemistry-destroying shortstop Jose Reyes.)

All that said, let’s take a quick look around the Playoffs…

• Detroit/Chicago: As long as the Pistons stay healthy, physically and mentally (Sheed!), there’s no way they don’t win the East. Not only have they rediscovered that defensive tenacity they had in 2005, but their offense has been really impressive thus far. Da Bulls? They didn’t need inside help to beat the Heat, but suddenly their fleet of fleet guards are being harassed by Billups and Rip and Tayshaun, and there’s no inside threat to collapse the Pistons and give the Bulls some wiggle room.

• New Jersey/Cleveland: I don’t know if the Nets’ injuries and age is starting to catch up with them, or if the Cavs are finally turning the intensity up like they’ve been threatening to do all season. These two games have both been close but the Cavs have combined to outscore the Nets 50-37 in the two fourth quarters. And how much help do the Nets need inside? Drew Gooden has combined for 28 boards in the two games. If he has 14 again in Game Three I’m going shave my head except for a little soul patch on my neck. or maybe not.

• Phoenix/San Antonio: This one’s all about the coaches. San Antonio basically out-muscled the Suns in Game One, so D’Antoni went bigger in Game Two and started Krazy Kurt Thomas, who effectively clogged things up for San Antonio and gave Phoenix a real mid-range threat. I also love the dichotomy of the two offenses, the way Phoenix keep trying to force tempo and play from the outside in, versus the way the Spurs do their methodical thing and try to bang it in to Duncan and play from the inside out. And watch the way D’Antoni and Popovich each try to work the refs and gain that little bit of advantage.

• Utah/Golden State: Obviously this one is probably the most fun series to watch. I like the adjustments Utah made from the Houston series to this one, first and foremost looking to push the tempo a little more and get cheap fast break baskets when they’re available. Deron Williams and Carlos Boozer are getting the bulk of the headlines for Utah, but don’t sleep on what Kirilenko brought in Game One: A defender who can match-up with pretty much any of Golden State’s wing players, which Dallas did not have but can also slide down and defend the rim (7 blocks in Game One). I thought AK47 was the MVP of Game One. He didn’t have the points or boards that Williams and Boozer posted, but his presence was really invaluable out there.

• Regarding the whole “NBA has racist refs” story, a reader who asked that I not use his name wrote in…

I think you, and the entire media, are missing the real angle in the Wolfers research. Wolfers and his coauthor are making the point that DESPITE the heroic efforts of the NBA to provide an absolutely level playing field for the players, racism is so subconscious and innate that it cannot be completely eliminated. The point of their paper is that if even the NBA, with all of its checks and balances on officiating, can’t wipe out subconscious racial bias, how can one expect police pulling a car over at night to do it?

Throughout their paper they actually commend the NBA for reducing racial bias as much as it does — I added emphasis: (“These results are striking given the level of racial equality achieved along other dimensions in the NBA and the high level of accountability and monitoring under which the referees operate.”; “…the evaluators in our sample (NBA referees) are a particularly expert group, with substantial experience, continual feedback, and they face robust career incentives to be accurate. Indeed, NBA Commissioner Stern has claimed that these referees ‘are the most ranked, rated, reviewed, statistically analyzed and mentored group of employees of any company in any place in the world.'”)

Really, the remarkable thing is that, despite the NBA’s considerable efforts, they cannot get this innate bias down to zero.

It’s a shame that the media insisted on the race-baiting spin about how NBA referees are biased. And it’s a shame that the NBA responded with a full-court press. (Sorry!) The research truly is a testament to how far this country has come, racially, and how far we still have to go. It in no way (in my reading) indicts the NBA for anything. Indeed, the referees appear likely to be significantly less biased than the rest of society. I hope you (or someone) will get the spin right.

To do this, I urge you to read the underlying research paper. Ignore the statistics; any credible statistician or economist who has read the paper thinks the authors did the analysis right and you can trust them. (The concerns you mention in your column — no offense — are pretty obvious and have been accounted for.)

First of all, I’ll never trust a statistician again after my Statistics 201 teacher at UGA “accidentally” turned off the lights during our final exam. But that’s another story.

I think the media, particularly the New York Times, went with what you called a “race-baiting spin” because that obviously turns heads, but also because it’s a study about race. And in America, race is a hot-button topic.

But to be honest, I have no interest in reading the underlying research paper. I’m sure the men who wrote it are fine gentlemen who worked really hard on it, but to me this paper is like ESPN the Magazine — I don’t think I’m going to learn anything by reading it, I’m probably not going to be entertained by reading it, I don’t think my life will change in any significant way if I don’t read it, so I’ll just pass.

Basically, unless I’m understanding all of this incorrectly, no matter how you spin it the study is telling us that the NBA referees are racist, intentionally or not, and that referees are just a reflection of society in general. Great. Can we all move on now?

At least now we know why the Jazz are beating the Warriors.

• Dick Stockton and Reggie Miller continue to entertain. Whenever a call is made on the floor, Stockton just seems to randomly choose a name of a player on that team and assign blame to him. If he’s wrong, which he usually is, he may or not correct himself later. And Reggie’s mixed-metaphors are improving with each game. During Game One of Utah/Golden State, as one of the teams hit a cold spell, Reggie noted that they were “unrattling.”

• We still need an official WNBA Player of The Links. Is Latasha Byears still playing?