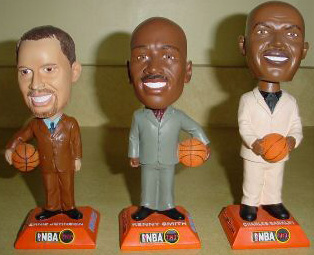 Each fall, I know it’s time for the NBA season to start when I find myself filing into a Time Warner Center conference room for a catered lunch with Charles Barkley, Ernie Johnson and Kenny Smith. TNT gets the guys into New York City for a day, and then they unleash the hounds (a bunch of writers) upon them for an on-the-record conversation about pretty much anything we can think to ask them.

Here are my notes from today’s lunch:

• Turner Sports president David Levy began by noting this was Turner’s 26th season televising the NBA. Anyone else remember when they used to have games on TBS? I do.

• First topic of conversation was LeBron’s future in Cleveland. Chuck said he feels like LeBron should stay in Cleveland because not many guys have the chance to stay their entire careers in their hometown and be really successful. Kenny agreed, but pointed out LeBron might not be as much of a “sentimentalist.” Good word. Chuck said if LeBron leaves Cleveland, it could only be to come to New York. I asked if meant the Knicks or also the Nets. After a long pause, he said, “The Knicks.”

• Chuck and Kenny said they don’t agree with the direction of the teams who’ve been terrible (“turrible”) the last few years to set themselves up to have cap space in 2010. “The risk isn’t worth the reward,” Kenny noted, before recalling a few years ago when the Bulls had all that cap space and ended up with only Ron Mercer.

• Putting it bluntly, Chuck said, “I don’t like that strategy of, Let’s tear this thing down and suck for three years.”

• Charles echoed my prediction in the SLAM NBA preview issue that the Clippers could be a surprise team this season. (“Believe it or not!” he said.)

• Charles had one long answer where he used the phrase “First of all…” three different times.

• Kenny and Chuck agreed that the top four teams in the League are the Lakers, Spurs, Celtics and Magic. Someone asked if LeBron and Shaq could win it. “No,” Charles said, before adding, “Which Shaq? This one, or Shaq from 1996?”

• Chuck: ”With the exception of Mike Mathis, the NBA refs have always been good guys who worked hard.”

• Ernie said all the movement in the NBA this summer has been great. “I can’t remember the last off-season when so many people were coming up to me and asking about the NBA during the summer.”

• Charles said the Lakers are going to be great but it will still be compelling to watch them throughout the season. “Everything could be great for 2-3 months, and then Ron Artest could be Ron Artest.”

• I love that Kenny still somehow manages to pronounce Pau Gasol in a way that rhymes.

• Charles said Russell Westbrook “is a flat-out stud. He’s going to be one of the best point guards in the NBA for the next ten years.”

• Only Charles Barkley can begin a sentence like this: “You know, last year when LeBron James got mad at me after I said he needed to shut the hell up…”

• Kenny said that impending free agency in athletes leads to selfishness 80 percent of the time. Related but not related, both Kenny and Charles agreed that the players in Orlando were probably privately upset during the Finals when Jameer Nelson came back and Anthony Johnson got benched.

• It was 25 minutes before the Atlanta Hawks were mentioned, and it wasn’t by me. Charles said, “They’re going to be a good team.”

• I asked Charles about his recent comments where he said he’d like to become an NBA general manager. He said, “Some of these other guys suck, give me my chance to suck.” Chuck also singled out the Minnesota Timberwolves as having had a “stupid” draft.

• Kenny said he’s “gotten close” a few times to being offered a coach or GM position. Someone asked if he ever felt like it was harder for him to get a front office job because he was African-American. Kenny said never, and added, “One time, I was being interviewed by Joe Dumars. So if he had an issue with me being African-American, we’d have had a real problem.”

• Regarding adding Kevin McHale to the NBA TV staff, David Levy said that met with McHale and it “clicked.” Ernie also said he got to know McHale and that he’s a great story teller.

• Someone asked Chuck if he ever got tired of seeing his name brought up as a guy who never won a title, and he said only during the Playoffs each season in every sport, when they show lists of the great athletes who never won titles. Charles added that last season during the Finals, “Kenny, being the assh*le that he is, pointed [to the Lakers celebrating] and said, ‘Look down there. Adam Morrison has a ring and you don’t.’”

• Chuck said that his goal every week is for the people watching TNT at home to enjoy the studio show. “I want people to say, I had fun watching…especially if we have a sh*t game. Don’t we have the Clippers and 76ers on New Year’s Eve this year?” Someone confirmed that yes, the Clips and Sixers will be playing on TNT on New Year’s Eve. Someone else pointed out that Charles had said earlier that the Clippers were one of the teams he wanted to watch this season. “Not on New Year’s Eve!” said the Chuckster.